Brake noise is annoying, but that doesn’t mean you should just roll up the window and ignore it. When the brakes on your car make noise they are trying to tell you something, and usually that message is that something’s wrong. Some sounds indicate that they’ve worn out, while others hint at damage that’s been done over time. Either way, you need to pay attention and get this crucial component serviced as soon as possible. Here are three kinds of brake noise you should never ignore. 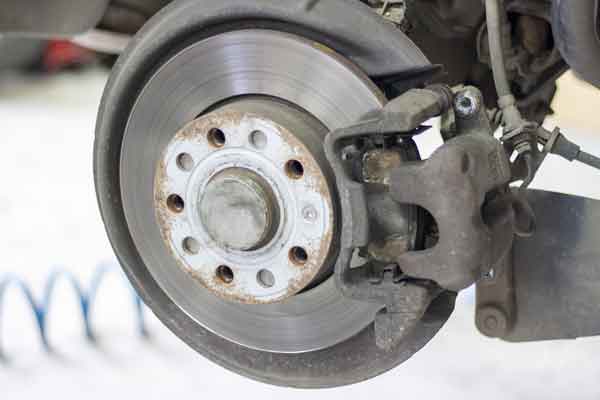 Any squealing sound you hear from your brakes is usually produced by one of two things. The first is a set of tabs attached to the brake pads that gradually becomes exposed once the pad material has worn down to the point where they need to be replaced. The metal tab then rubs up against the steel of your brake rotor to produce that squeal as a reminder that it’s time to head to the garage. Some pads might not have a tab, in which case the squeal is a sign you’re down to the metal backing plate of the pad itself, forced against the spinning rotor. This is a much more urgent situation — one that requires immediate attention.

A thumping sound while braking, usually coming from the front wheels, which do the majority of your braking — can indicate that your brake rotors have gone “out of shape.” In other words, they’ve become warped. In addition to a rhythmic thump while braking, you will also most likely experience a front-end shimmy through the steering wheel to go along with the brake noise. Sometimes instead of a warped disc the thumping is caused by a buildup of pad material on the rotor itself, which can often be machined off instead of replacing the entire unit.

If the brake noise you hear sounds like something is dragging under the vehicle, usually from the rear, although sometimes it can occur up front as well, then you need to take your car or truck in to be serviced. Typically, this dragging sound is caused by a brake caliper or brake drum that has either seized or not completely released when you took your foot off the brake pedal. This, in turn, leads to the pad or shoe maintaining contact with the rest of the brake mechanism while you drive, which wears it down and also costs you performance and fuel mileage over the long term.

Check out all the brake system products parts available on NAPAOnline or trust one of our 17,000 NAPA AutoCare locations for routine maintenance and repairs. For more information on how to identify brake noise, chat with a knowledgeable expert at your local NAPA Auto Parts store.