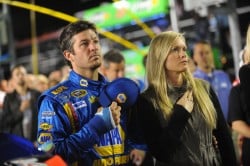 The Michael Waltrip Racing driver started 17th and quickly showed impressive speed in his NAPA Toyota by driving up to second place within the first 55 laps. Shortly after the restart on lap 90, a car made contact with the No. 56 and the damage sustained to the right side created a very tight-handling condition. It caused Truex to lose eleven spots on the track during the long green-flag run and a lap to the leaders. 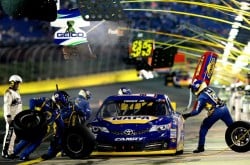 The NAPA KNOW HOW crew went to work during the caution on lap 172. Truex pitted two times. The time on pit road was well spent as the repairs resulted in a much-improved Toyota. From that point on, lap times for the No. 56 ranged well within the top five and allowed Truex to gain four positions to run in 18th at lap 250.

A late-race caution with 20 laps to go provided a chance for the NAPA team to race back onto the lead lap by implementing the wave-around strategy. All Truex needed was another quick caution to get back into contention as his NAPA Toyota remained one of the fastest cars on the track. Unfortunately the race remained under green-flag conditions. Crew chief Chad Johnston decided to stretch the fuel mileage but fell short by three laps. Truex pitted for a splash of gas that resulted in the 22nd-place finish. 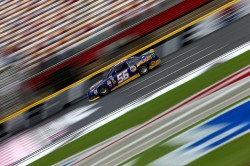 “We had a top-five car tonight until someone got into us on a restart,” said Truex. “It cost us a lot. The NAPA Toyota just got too tight and we had to wait for a caution to get the right-side sheet metal repaired. Once we did, the NAPA Toyota was back to running top-five times. We tried a bunch of strategies to get back onto the lead lap. We gambled at the end but ran out of gas. I want to thank Chad and the guys for giving me such a good car tonight. We just got ran into and it made for a tough night.” 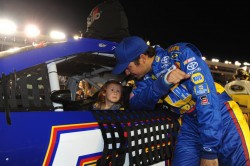