Gary Bremer is celebrating 60 years in the automotive parts business. “I love the work,” he said.

Bremer began his career with Genuine Parts Company on September 18, 1957 in the stockroom at the New Orleans Distribution Center. He worked his way up in the organization and around the country with GPC for 22 years before purchasing the NAPA AUTO PARTS store in Lompoc, California, in 1979.

When he applied for his first position with GPC, Bremer said the only thing he knew about the company was what he saw of a NAPA store from the window of the city bus he rode to high school each day.

“After graduation I was looking for a job and saw an ad in the newspaper for stockroom help at Genuine Parts Company. I applied on September 17, 1957, and started work the next day starting at $1.25 an hour,” he said. “Mostly, I unloaded tailpipes in the stockroom. The water and salt air in New Orleans is hard on exhaust systems, causing corrosion, so we sold a lot of tailpipes. In fact, there was a load or two delivered every week.” 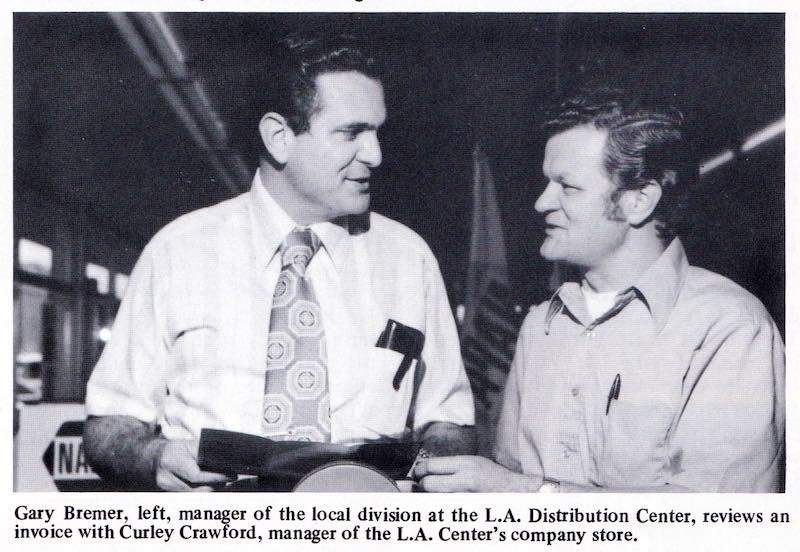 From Stockroom to Store Ownership

After a few months in the stockroom, Bremer moved to the GPC-owned store on Airline Highway, working the counter, and then back to the New Orleans DC in May 1958, working in Jobber Service. He soon became manager of that department and then in May 1963, he joined the DC sales force.

In 1965, Bremer was transferred to Mobile, Alabama, to manage the company-owned jobbing operation there.

In October 1967, he became the Local Manager in Portland, Oregon, and in late 1969 he moved to the Los Angeles local to become manager there. He was transferred again in December 1976, this time to Colorado as manager of the Denver local.

“In 1979 we were still in Denver and my son Gary Jr. was graduating from high school and about to enter the automotive program at the University of Southern Colorado (now Colorado State University-Pueblo). We had already moved a number of times and I told my wife Joan that I imagined in another four or five years we’d be in one part of the country while our sons Gary and David would be in another part of the country. That’s when I made a call to Bill Pardue, the Division VP in Los Angeles, about buying a NAPA store.

“The Lompoc NAPA, about 50 miles up the coast from Santa Barbara, was available. And that’s where we still are today. My wife and I were already familiar with the area, having lived in Thousand Oaks when I worked in Los Angeles.

“The store has been in the same location since we bought it. It’s on the main drag in Lompoc and well identified. Our son David and his family live in the San Francisco area and Gary works here with me and Joan at the store. In all, we have 16 employees in the Lompoc store and two more at an IBS we have had since 2005. A Changing Industry

“When I first went to work for GPC, most every store had a machine shop,” Bremer recalled. “It was a big part of our business. Then over time engines started lasting longer, complexity increased, and the investment in tooling and shop equipment became too much so many jobbers closed their machine shops. I cannot recall the last time we sold a re-ring kit. We still operate a limited machine shop here. We do drums, rotors, fly Teamwheels, and press work. We just don’t do engine work anymore.”

Not surprisingly, Bremer said one of the biggest changes he’s experienced in the business is the result of computers. “The first time I saw a computer up close was at the annual meeting in Atlanta in 1971. They showed us what looked a little like a refrigerator. It was a computer. And we were told that in a few years, GPC would be using them.

“We got the first computer in our store in 1980. We had to build a special closet-sized room with a wall-mounted air conditioner to keep it cool. That Data General unit was big, and it was shipped to us on a moving van with a lift gate. It threw off a lot of heat. It seems it went down at least once a month. Gosh, our current computer came UPS and if it goes down once a year that’s a lot. I don’t miss the card desk.

Another thing that has changed automotive parts sales is the increase in the number of import vehicles on the road. “When I ran the Los Angeles local, Bill Hatcher, President of GPC at the time, came to visit. He stayed at a hotel with a view of the Harbor Freeway and was amazed at the amount of traffic out here. Bill said with this many cars in LA our sales should be much higher. And I said about 50 percent of those cars are foreign. But we have hardly any foreign parts. Everything we had for Toyota, Datsun (now Nissan), and Volkswagen fit on just three shelves. I wonder how many people reading this will remember the NAPA Imports Line?

“Today, NAPA is doing a good job with the import parts from Altrom. It’s a very important market, especially out here in California where we probably have more foreign than domestic cars on the roads.” 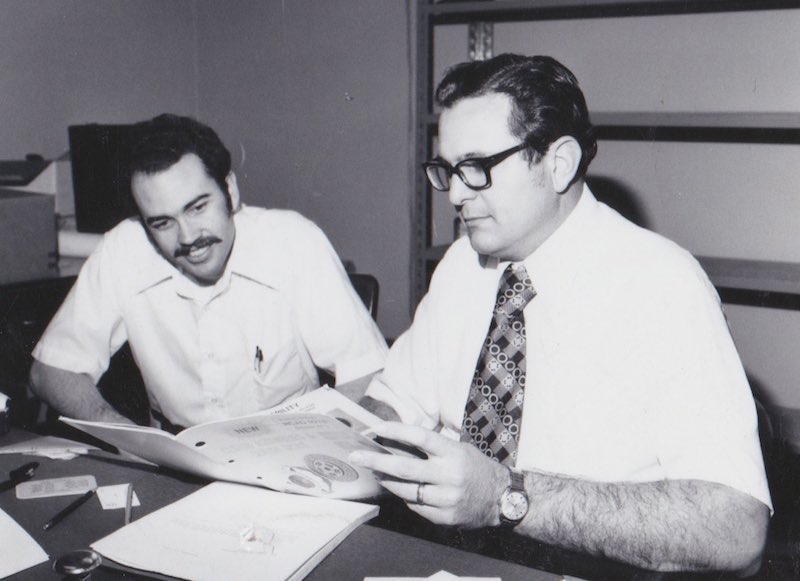 During his 60 years in the business, Bremer has met and worked with many recognizable figures at Genuine Parts Company including Wilton Looney who served as CEO from 1961 to 1990. “Mr. Looney was a very big influence on me,” said Bremer. “I’ve also worked for Bill Hatcher and I still have the letter he sent me back in 1957 welcoming me to the company. He was Vice President at that time. I’ve met every GPC president from Carlyle Fraser to Tom Gallagher, except Mr. Donahue, whose hand I hope to shake as well someday.

Among many others, a few people that have helped me tremendously were Jack Hannula, DC Service Manager in New Orleans and a retired Army Colonel; Frank Dial whom I met in Portland and later followed to LA in 1969; Bill Pardue, General Manager when I was in Los Angeles, and Bill Valentine, Western Division Vice President, along with many others throughout the years

With 60 years under his belt, Bremer has no plan plans to retire. He’s in his store about six o’clock every morning and can also be found there on Sundays. “I don’t know what I’d do if I retired. I’ve worked all my life.”

And that’s precisely the secret to his success. His advice? “Take advantage of every opportunity and learn from it. Work hard.” 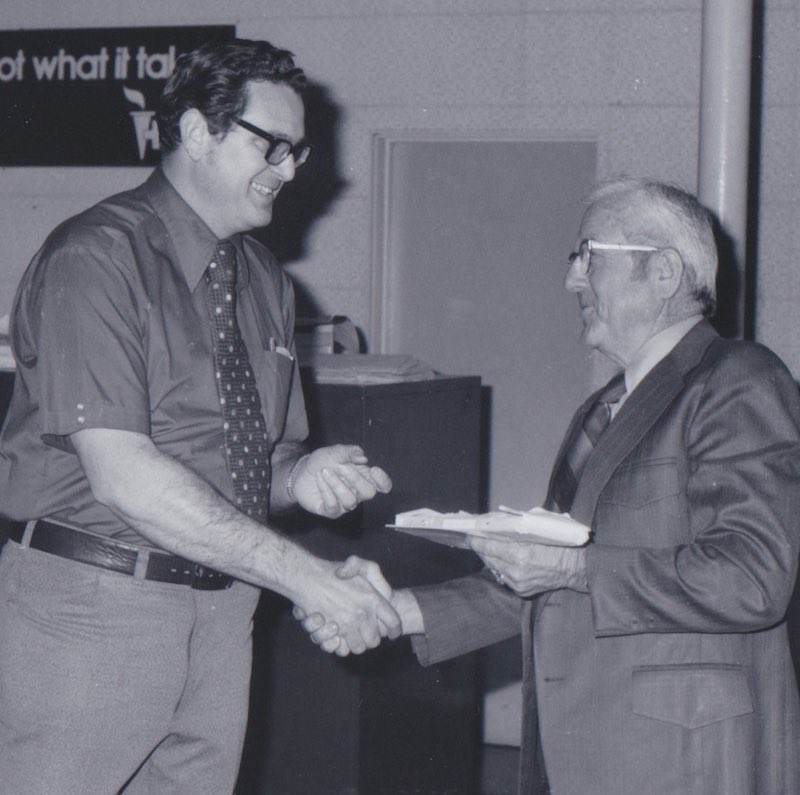