So, you accidentally put coolant down the oil neck, did you? Don’t kick yourself too hard, it happens. Mixing antifreeze in oil is not something your car appreciates, but it’s not an outright disaster. In any case, there are certainly worse things you could do. This is a relatively simple fix you can take care of with minimal hassle.

Oil is essential to keeping your engine running. It provides proper lubricant to reduce friction and wear and, to a lesser extent, it helps remove heat. Coolant is also meant to prevent overheating, but not in the same way, and not in the same system. Engine oil is thick to provide a good coat, coolant is thin to maximize flow and dissipate heat. Oil is chemically manufactured to “play well” with internal engine parts, the chemicals in antifreeze make it naturally harsh on internal engine components such as bearings, causing wear and damage over time if repeatedly exposed. Additionally, the physical properties of oil cause it to separate and float on top of water/coolant, so it’s easiest to deal with if you catch the mistake very early. 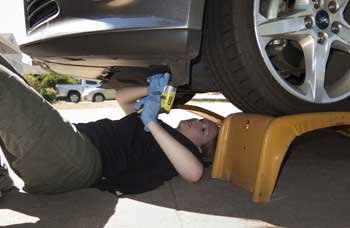 If you notice the mistake immediately, do not start the engine. Just let it sit for at least one hour. This keeps the oil and antifreeze from mixing, allowing the antifreeze time to settle in the bottom of the sump, and keeping it out of the oil filter. In this situation, get yourself a drain pan, remove the sump plug and allow the coolant to drain out until you see several seconds of only engine oil coming out. Replace the plug, top off the oil level — with oil this time! — and drive it for a day or so. Then do a full oil change, including the filter, just to be safe. If you realize the mistake after having run the engine at all, do a full oil change immediately, including the filter. Again, drive it for a day or two, and perform another full oil & filter change.

How much should you worry about this mistake? In the great scheme of things, it could be worse. The exception would be if you filled a completely oil-dry engine with coolant and drove it. That would be bad. The truth is, if what we’re talking about is a contamination, the damage takes a while to set in, and driving a few miles like this isn’t going to significantly decrease the lifespan of the engine. That said, once you realize the mistake, you should fix it immediately.

While it’s OK not to panic, you should take care of this misstep sooner than later. The cost of an oil change or two is nothing compared to an all out breakdown in the future. Plus, an oil change is a pretty straightforward job, so no one even needs to know about your little “oops” moment. And that’s kind of priceless, no?

Check out all the chemical products available on NAPA Online or trust one of our 17,000 NAPA AutoCare locations for routine maintenance and repairs. For more information on mixing antifreeze in oil, chat with a knowledgeable expert at your local NAPA AUTO PARTS store.

NAPA Know How Blog Antifreeze in Oil: A Guide to Not Panicking