Elliott is looking to gain superspeedway experience in the ARCA Racing Series race at Daytona.

DAYTONA BEACH, Fla. (Feb. 11, 2014) – Chase Elliott will make his track debut at Daytona International Speedway this Saturday, Feb. 15 when he lines up his No. 9 Hendrickcars.com/NAPA Brakes Chevrolet for the 80-lap ARCA Racing Series event.

Elliott has competed at superspeedway lengths before. Last season, he earned his first ARCA victory running at the 2.5-mile Pocono Raceway. But apart from some preseason testing, Daytona’s 2.5-mile restrictor-plate track is new ground for the 18-year-old Elliott. And while its continued pace promises new challenges, Elliott is excited to learn more, particularly as he prepares for his first full season in the NASCAR Nationwide Series.

“The biggest thing I see is having an opportunity to race at Daytona before the Nationwide Series race,” said Elliott, who will drive the No. 9 NAPA Chevrolet for JR Motorsports at Daytona on Feb. 22. “Getting used to how the draft works under race conditions and getting used to how spotting is going to go will be key as well. It is a completely different type of racing than I’ve ever done so all the experience I can get before Feb. 22 will be helpful.

“When we get a chance to do a little bit of drafting in the ARCA race this Saturday, that’s where I’m going to have to learn a lot. The superspeedway stuff is different for me.” 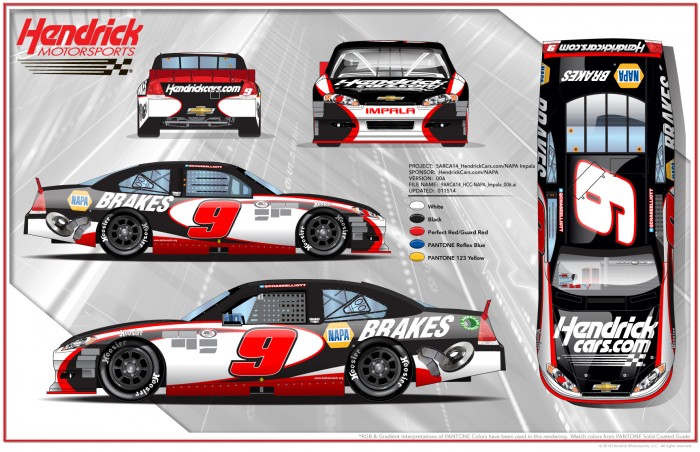 It might be Elliott’s first race at Daytona, but he enters the weekend with testing experience on the 2.5-mile superspeedway. He participated in the ARCA open test there in late December and also the Nationwide Series test in January.

“It was really exciting for me to finally be able to come down to Daytona and be a part of the ARCA test,” Elliott said. “I told my Dad this when we were flying down here that it’s weird coming down here and not to come watch him drive. It’s kind of a weird feeling for him and me both.”

Elliott is no stranger to success in the ARCA Racing Series. He became the youngest superspeedway winner in stock car history with his ARCA win at Pocono in June 2013. In 11 total ARCA starts the past two years, Elliott has posted six top-five finishes, 10 top-10s, earned one pole position and led a total of 160 laps.

“I think his knowledge and his experience is going to be more so beneficial when it comes time to be around other cars,” Chase Elliott said. “I think he’s one of the best when it comes to understanding the air and what it takes to take advantage of it when you’re with other guys around you and trying to get runs on people. Whenever that side comes into play, I’m sure he is going to have some tips for me.”