A series of devastating storms including two powerful tornadoes ripped through South Georgia the  at end of January leaving a path of destruction in its wake. Over a dozen people were killed and dozens more were injured. The storms damaged homes, toppled trees, and downed power lines.

Albany, Georgia, a city hit by one of the tornadoes, is the home of Gieryic’s Automotive Repair, a NAPA AutoCare Center owned by Tom Gieryic. While Gieryic’s shop was spared, he went to work cutting up trees for storm victims soon after the first wave of severe weather had passed.

“On day two of the storms, my brother-in-law and I were out on the roads cleaning up the smaller jobs,” Gieryic explained. “However, after the tornado came through, two of my employees were affected and needed to take care of what they needed to do so we were shorthanded on help at the shop and I couldn’t go out in the trenches anymore.” 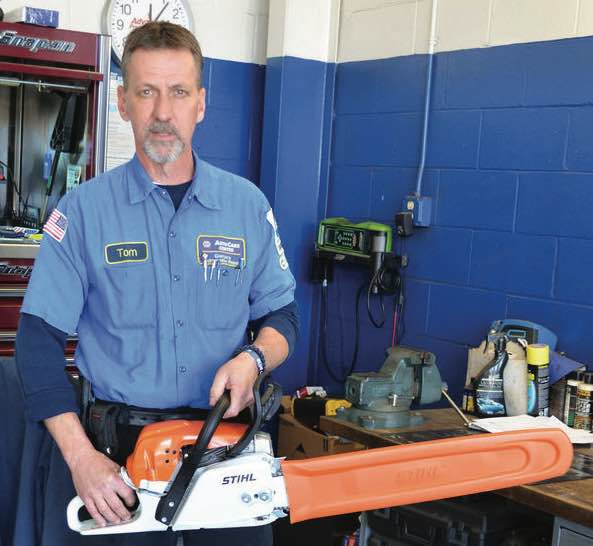 Gieryic, however, was not deterred. After having been personally involved in the clean-up effort he knew one of the most valuable pieces of equipment in the field was the chainsaw. So, his goal was to put more chainsaws in the hands of volunteers. To do it, Gieryic rallied the support of local businesses and he reached out to NAPA for help.

“I went through my phone, gathering contacts of parts suppliers, salesmen that deal with me, and others. I told them what I wanted to do which was to provide chainsaws and chainsaw equipment for the volunteers.”

Art Fischer got the message. “I learned that Tom and others had assembled a small army of volunteers and that he was raising money for supplies so they could help anyone in need of tree removal,” said Fischer.

“While Tom raised money for supplies and chainsaws locally, more was needed. NAPA donated 17 chainsaws for the volunteers and sent pallets of safety gear including goggles, gloves, masks, and other supplies. Balkamp also stepped in and covered the cost of the safety gear,” Fischer added.

Gieryic’s shop served as a drop-off and pick-up point for people needing chainsaws and other supplies.

One volunteer Anna Noble saw a Facebook post about the free supplies. She came to Gieryic’s Automotive to pick up work gloves before she went to a friend’s home in an East Albany neighborhood. She said, “They live in one of the trailers and just the frame is left, that is it.”

The chainsaws were handed out to vetted volunteers including the volunteer Dougherty County Search and Rescue team. In that county alone, where the city of Albany is located, nearly two million cubic yards of storm debris was left behind. 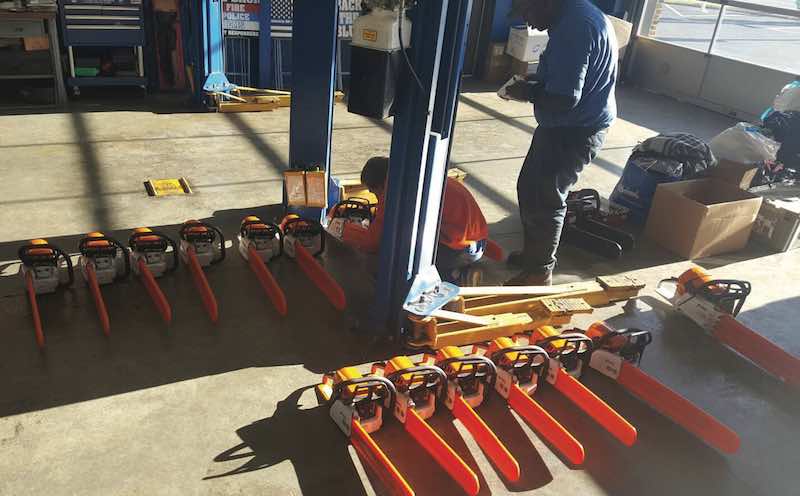 Gieryic said the chainsaws were a gift, but asked the volunteers, “If you have no use for them after, I want you to bring them back so we can store them for the next time we need them. That way we can get them out a lot quicker.”

Gieryic and his efforts were featured in the local media, but he was quick to point out, “This is not about me. It is about the volunteers who are out there on the front lines helping people who were affected by these storms and it’s about the sponsors who were willing to donate thousands of dollars worth of saws, oil, blades, safety equipment, and other much needed supplies.”

A Bright Spot in the Darkness

Volunteers soon noticed how the destruction was weighing on area residents and some began carving crosses in stumps of trees as a symbol of hope for the community. Gieryic said people wanted the crosses and he had the idea to sell them in order to raise money for additional equipment to help with the clean-up. So, volunteers set up “shop” outside of his AutoCare Center.

Gieryic said the sound of the chainsaws carving the crosses was, “the most beautiful noise you’d ever hear. You imagine the noise of eight or ten chainsaws going off at once right on the corner of the intersection. It got everyone’s attention and they just started coming in. The whole effort is one big, large chain with a bunch of links in it.”

Jason Stewart, one of the volunteers said, “The donations keep us going. They keep our chainsaws going, they keep us fueled up.” Seeing how his town is pulling together, Gieryic said, “It makes me feel good to be a part of this community. It’s a little bit of brightness going on in all of this darkness.”