Automotive glass is relatively unique when compared to more traditional types of glass for a number of reasons. Unlike the windows in your home, for example, auto glass has to offer a clear line of sight for the driver and passengers, and double as a structural element that adds strength to the vehicle’s design. Furthermore, it must be able to resist shattering into dangerous shards that could seriously injure occupants in the event of an accident.

These are all important and difficult roles for glass to fill, and it’s perhaps no surprise that the road to modern car and truck glass wasn’t a simple one. Here’s a quick look at the history of this important, yet rarely considered automotive component.

Many early automobile accidents involved drivers being seriously injured by the plate glass used in their windshields, as they found themselves ejected through the windshields or hit by shards of glass after a shattering impact. Henry Ford was one of the first automakers to investigate whether it would be possible to make glass stronger, as well as shatterproof, in his vehicles.

The result of his inquiries was two-fold. Side and rear windows in Ford vehicles began to be replaced with tempered glass, which is created using a heating and cooling process that expands and compresses the glass while it forms, significantly improving its resistance to impact damage. Tempered glass also features ground edges in order to increase their strength. 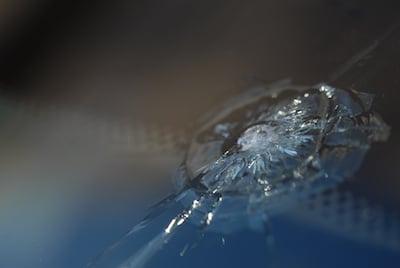 Windshields required a more comprehensive solution, and it was found in the form of laminated glass. This type of automotive glass is also called safety glass, because, when shattered, a layer of polyvinyl butyral, or PVB, holds both sides of the panel together, preventing splinters and shards from flying. Think of safety glass as a sandwich with sticky PVB on the inside and glass on the outside.

Ford was ahead of the glass game, but once other automakers began to follow in his footsteps, the public — and the government — realized that the benefits of tempered and laminated glass were important enough to include in the safety reforms that swept the industry in the early 1970s. The National Highway Traffic Safety Administration (NHTSA) developed a series of standards that defined not only how strong automotive glass had to be, but also the degree of transparency that it offered, how well a windshield stayed in place during an accident and the strength of a roof in resisting a rollover (with the windshield playing an important part in keeping the shape of the car intact).

Most automotive glass today still follows the previously created NHTSA standards, but a continual march toward stronger rollover resistance, ultraviolet radiation filtering and resistance to airbag impact from the inside informs current regulations. Some companies have even moved from tempered to safety glass on side windows in a bid to protect against smash-and-grab thieves, as well as to repel noise by way of acoustic laminates.

Automotive glass has come a long way since the fledgling vehicles created in the early 1900s, but it still may see innovations that keep drivers safer in the future.

Check out all the vision and safety parts available on NAPA Online or trust one of our 17,000 NAPA AutoCare locations for routine maintenance and repairs. For more information on automotive glass, chat with a knowledgeable expert at your local NAPA AUTO PARTS store.

NAPA Know How Blog Automotive Glass: A Brief History of Its Development and Use