Want to stump your friends (or more likely watch a lot of different people come up with a lot of different answers)? Ask them this question: Why do some cars have back windshield wipers and some don’t? And I’ll be honest — I thought I knew the answer, but in doing research for this very piece, I found that the facts are kind of murky.

The Back Wiper Goes Way Back

Some of that may have to do with the fact that the back windshield wiper is a lot older than you might think. The first one showed up almost 80 years ago on the 1941 Pontiac. But production was interrupted by World War II, and the idea kind of got lost. 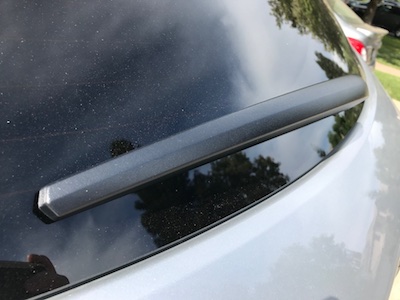 It showed up again on a production car available in America 25 years later — on the sloped rear window of the iconic Porsche 911 — and that’s when it became a thing, especially among import cars. Volvo wagons followed closely behind Porsche, and before long, we got to where we are now — with a lot of fastbacks, station wagons, minivans and SUVs running around with a rear windshield wiper. But why?

Well, it’s not a fashion accessory. A rear wiper is practical. It does the same thing the front wipers do — clear the glass. No, you don’t use the rear when it’s raining like you do the fronts, but every rear wiper I’ve ever seen also has a washer — use the two together and dust, mud and grime get taken off the back glass so you can see what’s going on behind you. Ever drive in a snowstorm or on a dirt road with a hatchback, station wagon or SUV? That rear window gets covered pretty quickly. And that’s where that rear wiper comes in handy.

How the Back Window Gets So Dirty

Now — what I thought I knew about why some cars have back windshield wipers and some don’t: My idea was that the rear window of a car with a trunk is upright enough and far enough away from the rear wheels and the bumper of the car that it doesn’t get as dirty in storms and on unpaved roads as hatchbacks, which are more slanted, and station wagons, minivans and SUVs, which are also upright, but are back there where the dirt, grime and muck gets kicked up onto the rear of the car more easily.

But good luck finding any scientific evidence to back that up. And you’ll find the outliers — sedans (generally sold in other countries) that have rear wipers (but do they need them?).

The bottom line here is that if your vehicle has a rear wiper, it probably needs it under certain conditions. And you need to treat it just like your front wipers — examine it every so often for wear or brittleness from the sun and replace it so that it’s ready to do its job on the rare occasions when you need to push that button or turn that knob (probably a good idea to read that part of the owner’s manual beforehand, too).

Check out all the windshield wiper blades available on NAPA Online or trust one of our 17,000 NAPA AutoCare locations for routine maintenance and repairs. For more information on rear windshield wipers, chat with a knowledgeable expert at your local NAPA AUTO PARTS store.

NAPA Know How Blog Back Windshield Wipers: Why Do Some Cars Have Them And Some Don’t?