The three Bill McAnally Racing drivers who dominated competition in the NASCAR K&N Pro Series West this year garnered the top series awards at the NASCAR Night of Champions celebration on Friday night at the NASCAR Hall of Fame in Charlotte, North Carolina.

Todd Gilliland, who was honored for winning the NASCAR K&N Pro Series West championship during the gala event in the Crown Ballroom, led the way as the BMR drivers were recognized for finishing first, second, and third in the standings following a season in which they won 11 of 14 races.

It marks a second straight series championship for Gilliland in the No. 16 NAPA AUTO PARTS Toyota and a record eighth series title for BMR – based in Roseville, California.

Gilliland – a 17-year-old from Sherrills Ford, North Carolina – was presented with the championship trophy and NASCAR championship ring. 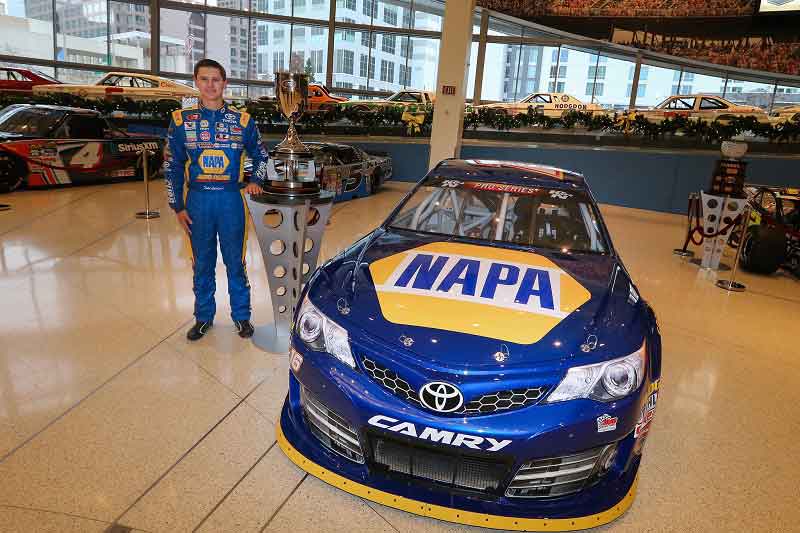 “This year has been super special, working with such great people at BMR,” said Gilliland, a member of the NASCAR Next program that spotlights NASCAR’s rising stars. “It’s been fun to grow as a team over the last two years and make ourselves better.

“Going to all these race tracks with fans who remember the Gilliland name was awesome, and hopefully we added to their memories of the Gilliland family,” he said.

“It was a very busy year, running both the East and the West, but I think it made me a better driver being able to be in a car every week and keep developing,” Gilliland said. “This year’s K&N West championship was a tighter battle, so at sometimes it was nerve racking; but a lot of fun.”

Gilliland received the 21 Means 21 Pole Award Presented by Coors Brewing Company and a champion’s jacket from Coca-Cola. While winning seven pole awards overall in the K&N West this season, he reeled off five straight to set a series record. 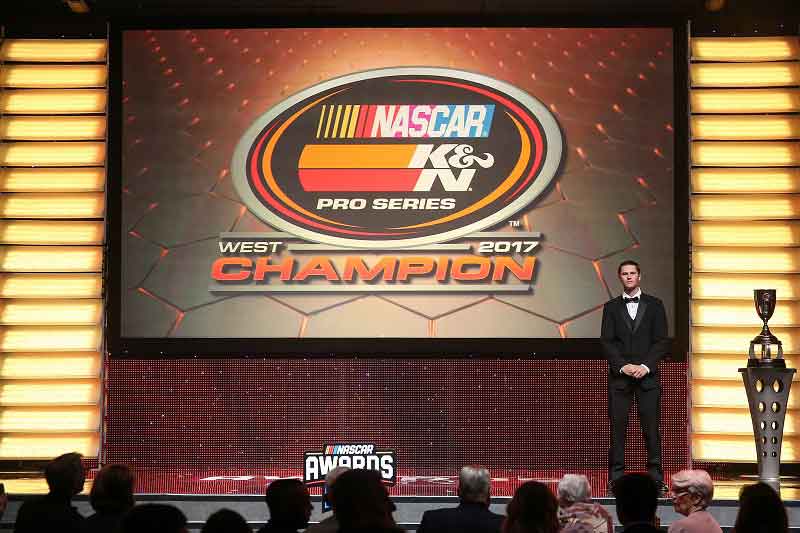 During Friday’s festivities, Chris Eggleston was presented the trophy for finishing second in the K&N West standings. The 2015 series champion from Erie, Colorado had a banner year as he battled for his second series title, driving BMR’s No. 99 NAPA Filters / H20 Fire Protection Toyota Camry. He registered four wins, four poles, 11 top-five, and 13 top-10 finishes.

Derek Kraus received the trophy for finishing third in the K&N West standings, along with being honored with the Sunoco Rookie of the Year Award in the series and the Sunoco Rookie of the Race Award for 2017. Kraus – a 16-year-old from Stratford, Wisconsin – had one win, one pole, nine top-five, and 10 top-10 finishes. He was the top finishing rookie in seven of the 14 races. Kraus is the fifth BMR driver to win the rookie award.

“It’s been a remarkable year for everyone at BMR,” said BMR President Bill McAnally. “All three teams were extremely competitive. I’m proud of the work by everyone and what everyone was able to accomplish.

“Todd and his team had another great year, made even more amazing because of the success they had while racing in both divisions,” McAnally said. “Chris and the No. 99 team had a terrific year and came close to taking home another title. And Derek and his team demonstrated their strength throughout the year, going to Victory Lane in the final race and coming away with the rookie title.

“Of course, none of this would be possible without the great sponsors we have,” McAnally said. “A big thank you goes out to all of them for making a record eighth title and everything else possible. Their support and continued loyalty is very much appreciated.”