Defending Knoxville Nationals champion Brad Sweet and the NAPA AUTO PARTS team finished sixth on Saturday in the most prestigious sprint car race in the world.

For a week every August, the sprint car world takes over Knoxville, a small town located in central Iowa, for one of the biggest sprint car events of the season, the winner of which takes home over $150,000. The Knoxville Nationals also draw one the largest car counts, with over 100 competitors from various series and tracks across the country, vying to earn a spot in the 50-lap A-main, let alone to race for the win. 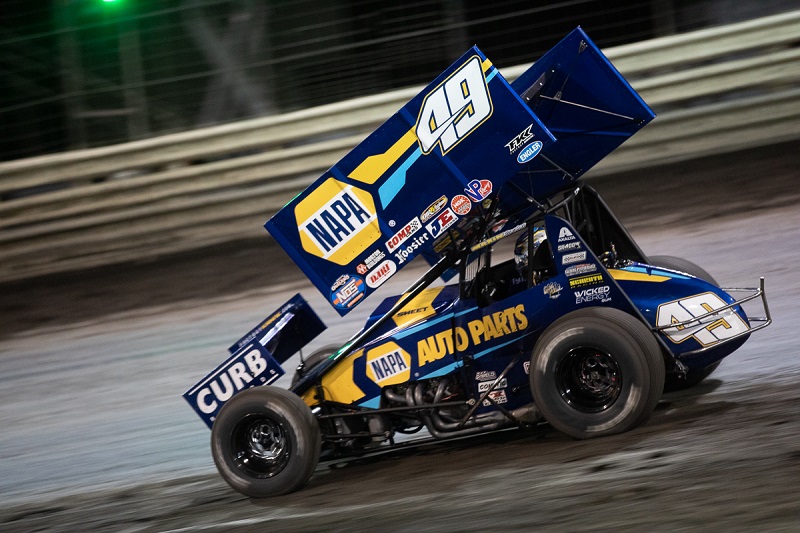 A non-World of Outlaws points-paying event, the Nationals have a format different from a typical race weekend. Drivers are split into two qualifying nights–Wednesday and Thursday–in which points are awarded for qualifying, heat races, and feature event finishes. The 16 drivers that have earned the most points over the two qualifying nights are locked into Saturday’s $150,000-to-win A-main.

Friday night is slated as a “do-over” qualifying night for drivers that don’t like their points total heading into Saturday’s events. Typically, drivers that aren’t locked into at least the B-main on Saturday will compete again on Friday, qualifying one lap, then running another heat and another feature. The four top points earners from Friday earn the 21st through 24th starting positions in Saturday’s feature race. 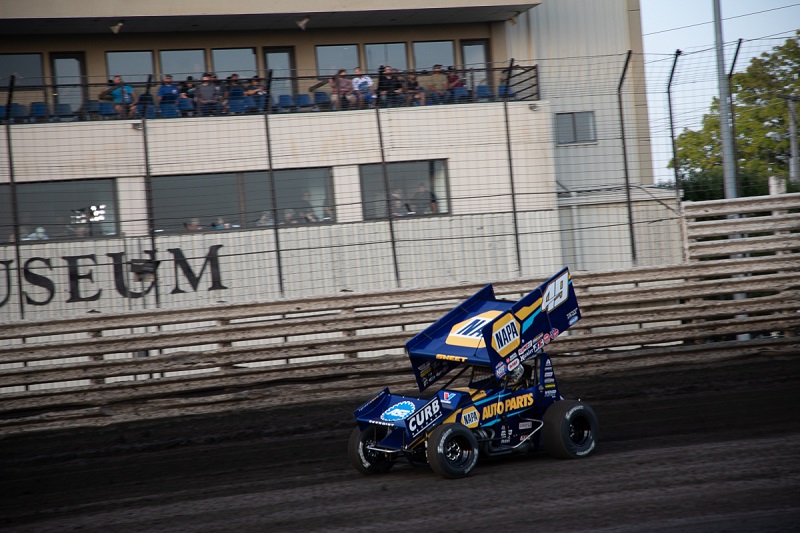 The remaining drivers compete in E, D, C, B-mains on Saturday night before the $150,000 finale – the most challenging sprint car race in the world to qualify for.

Sweet, along with 55 other drivers, drew Thursday as their qualifying night. “The Big Cat” went out late in the single-car qualifying order, which is typically not ideal. But, he went on to earn the 15th-fastest lap of the night. This put him starting sixth in his heat race. In just ten laps, Sweet powered his No. 49 car to the front, earning a qualifying night heat race win. 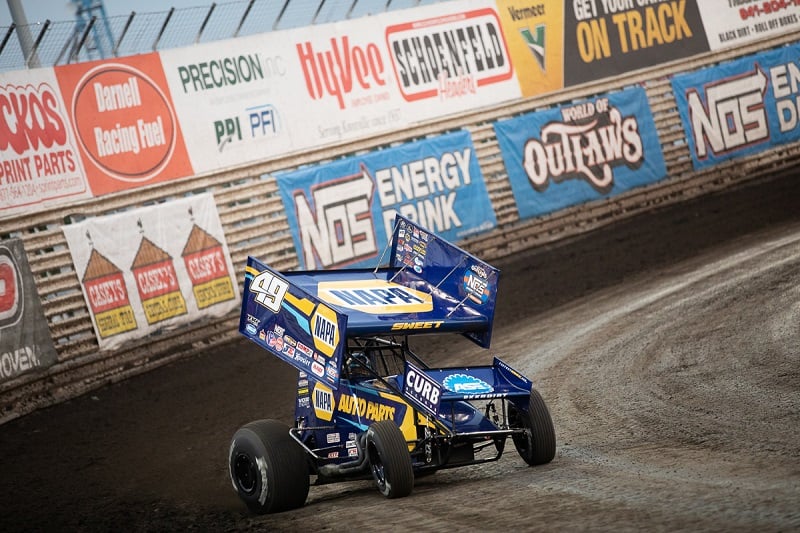 The win gave Sweet the third starting spot for the feature later that evening. When the green flag fell, he quickly moved to the front where he battled with World of Outlaws series regular David Gravel for the lead.

The two competitors battled side-by-side for multiple laps, but Sweet wasn’t able to complete the pass and crossed the start-finish line second.

The heat race win and a second-place finish in the feature would be enough nightly points to secure Sweet a starting spot in Saturday’s A-main, giving the No. 49 team Friday off from on-track action. 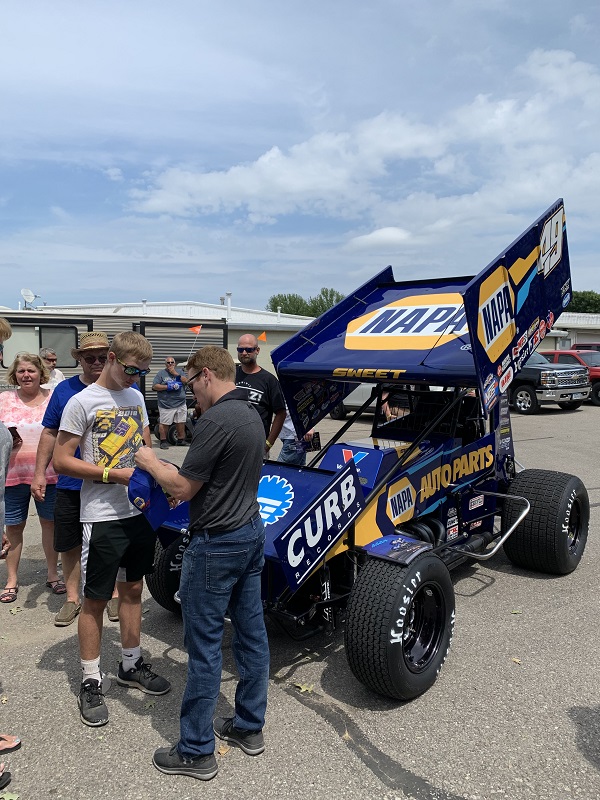 As the defending race winner, Sweet kept busy the next two days with track appearances and activities. Sweet raised his past champions flag in the infield and past champions banner in the fan midway; attended multiple autograph sessions and a water balloon toss in the Kids Zone; participated in a parade on Saturday morning; and finally, on Saturday afternoon, attended a private meet-and-greet lunch with nearly 100 NAPA guests from three different districts before heading to the track to try to defend his Knoxville Nationals championship. 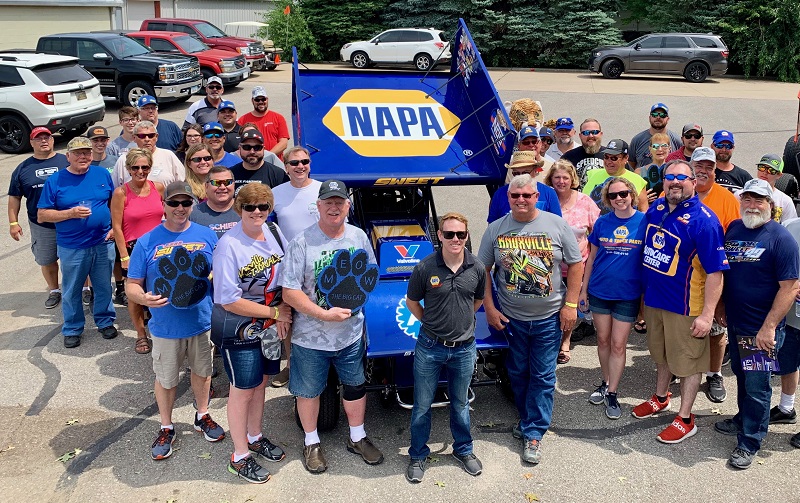 Sweet and the NAPA team started the 50-lap feature on the outside of the third row in the sixth position. At the start of the race, Sweet slipped back to the ninth as he struggled with the handling with the No. 49 machine.

The caution flag flew on lap 25 for a mandatory mid-race break for teams to make slight adjustments on the cars and to add fuel for the second half the race. 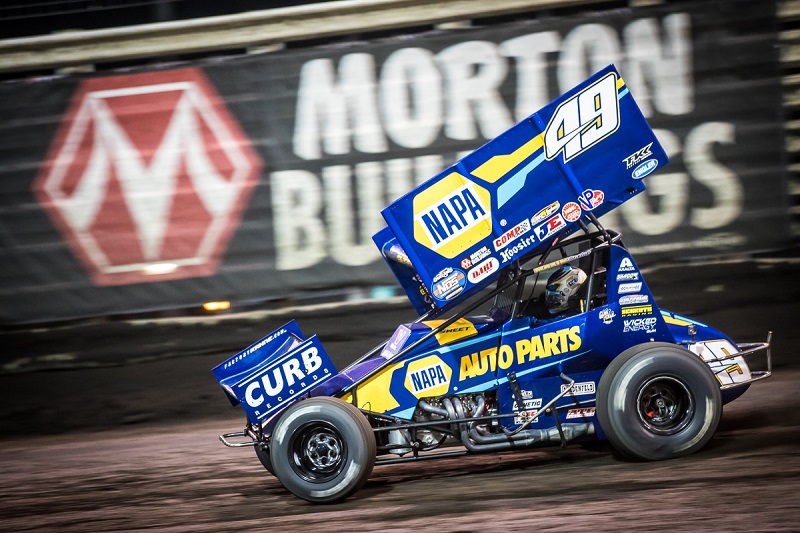 Crew chief Eric Prutzman, along with team members Andrew Bowman and Joe Mooney, quickly went to work making adjustments to the car. When the race resumed, Sweet worked his way back toward the front of the field.

While challenging for the third position with just 14 laps remaining, Sweet and another car made contact, nearly sending the NAPA AUTO PARTS car to the outside wall. Sweet was able to save the car from catastrophic damage and continued on. He held on for the remaining laps to finish sixth. 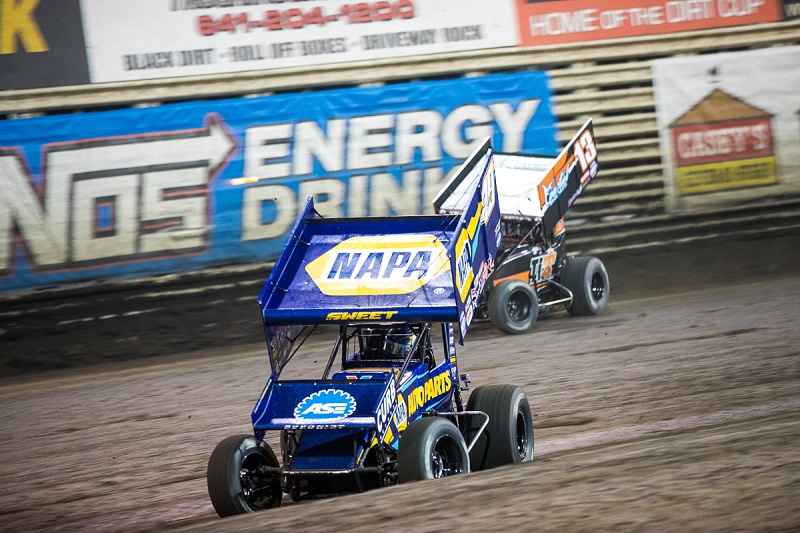 Disappointed in the end result, Sweet and company are eager to get back to their quest for their first championship. Next up, the World of Outlaws series returns to regular, points-paying events on August 16 at River Cities Speedway in Grand Forks, North Dakota, a track where the team had success earlier in the season. Sweet scored a third-place finish there in June.