Brad Sweet won two of four races at Eldora Speedway over the weekend, including his second-career Kings Royal on Saturday, along with its $175,000 payday. 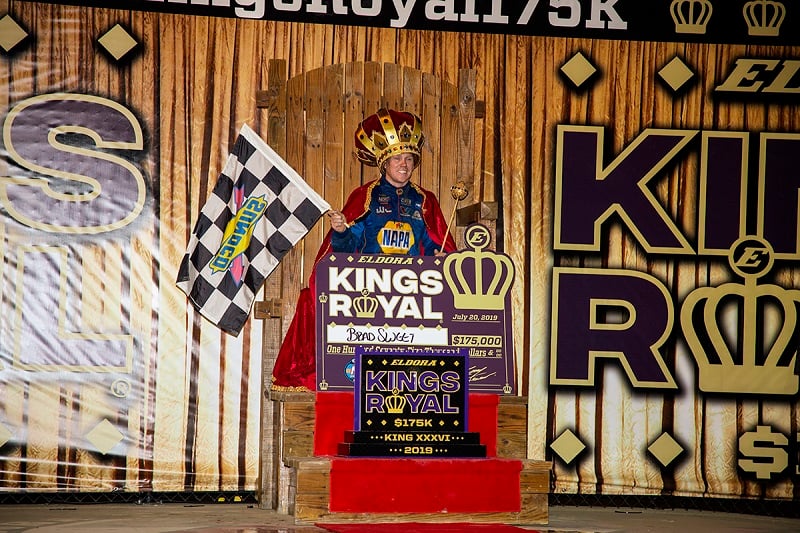 The NOS Energy Drink World of Outlaws Sprint Car Series had a jam-packed week, with the first of five scheduled races being held on Tuesday at Attica Raceway Park in Attica, Ohio. The night was cut short as rain began to fall just after the engine heat, never letting up and forcing officials to cancel races for the evening. 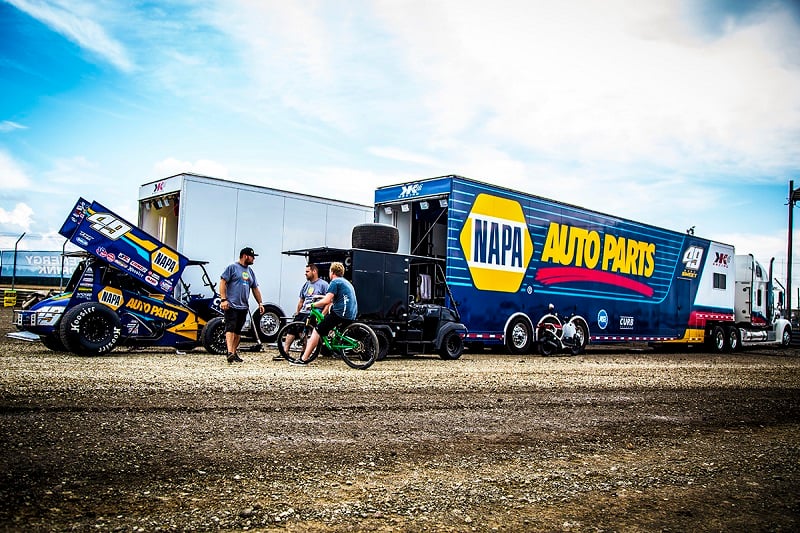 The series then moved to Eldora Raceway in nearby Rossburg, Ohio, for a rain-out make-up race on Wednesday, then straight into one of the series biggest race weekends of the year, the Kings Royal, which ran from Thursday through Saturday.

In the Wednesday make-up race from a rain-out at Eldora earlier in the season, Sweet qualified second out of 40 cars, won his heat, finished second in the dash and finished the 30-lap feature in fourth – his 27th top-five finish of the season. 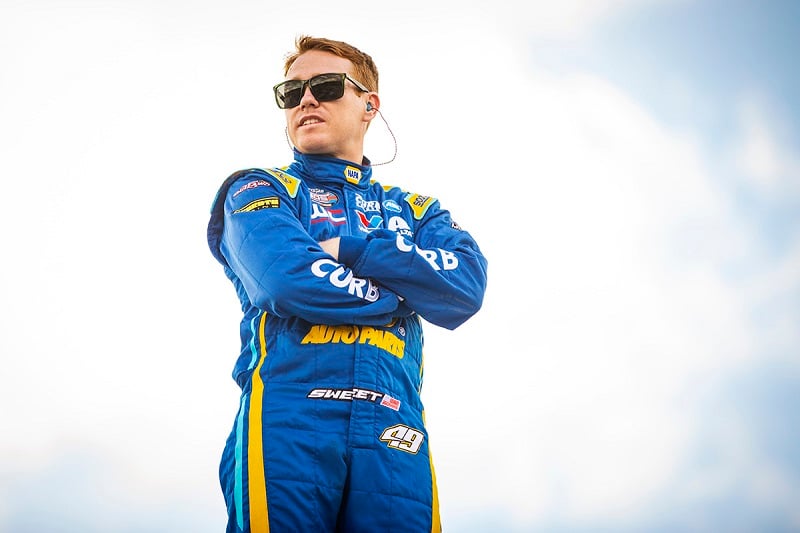 Thursday night, known as “The Jokers Wild,” marked the beginning of the Kings Royal weekend, now the richest race weekend in sprint car thanks to the $25,000 purse increase announced earlier this season. Sweet and the NAPA AUTO PARTS team qualified second out of 53 cars and went on to sweep the rest of the evening, winning his heat race, the dash, and after an exhilarating battle with Logan Schuchart and Donny Schatz for the entire feature, his tenth World of Outlaws feature race of the season. 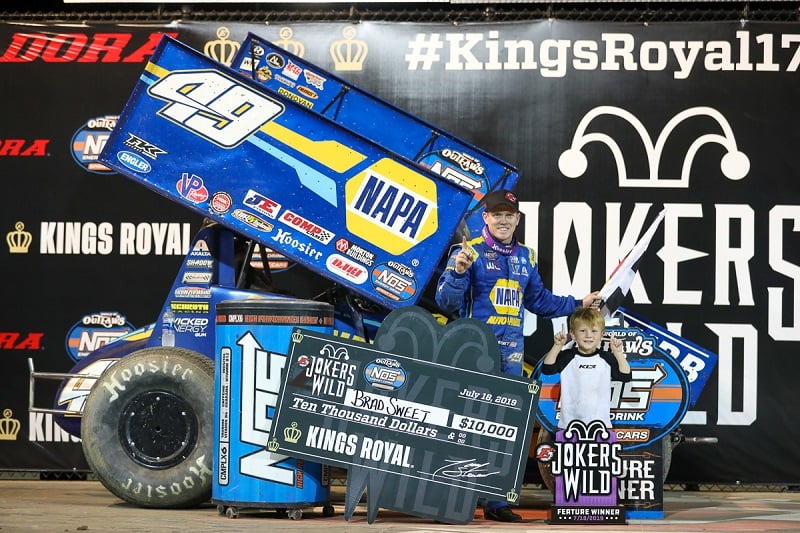 “Obviously, so far, it’s a dream season, but all of the big races are coming up,” Sweet said in victory lane. “I think we just try to keep our heads down and at the end of the season when it’s time to look back at the stats we hope we’ll have ten more wins, or more, and a championship.”

Friday was a different story for the Grass Valley, California, native. Sweet and company qualified second, finished second in the heat and seventh in the dash, giving Sweet the seventh starting position for the feature. At the drop of the green Sweet slipped back to the ninth in the running order. Working the bottom groove, he would remain there until, with fewer than 20 laps to go, he worked his way back up to eighth. A caution flag flew with only three laps remaining bunching the field back up. Sweet was able to get back up to the seventh spot when the checkered flag flew. 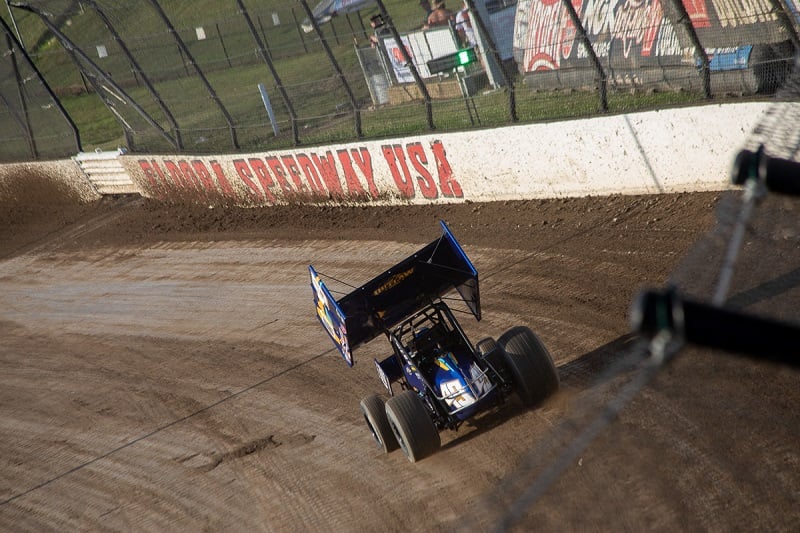 The NAPA AUTO PARTS team regrouped for Saturday’s $175,000 Kings Royal. Since the inception of the prestigious event in 1984, it has always paid its winner $50,000, making it one of the largest paying purses for Sprint Car racing in the country last year. But for this 36th year of the race, track owner Tony Stewart raised it to the largest purse in sprint car racing, upping the stakes for the entire field of drivers.

The evening began with Sweet spending time with NAPA VIPs, with a private meet and greet and hauler tours with employees and customers from around the area. He then went on to qualify a uncharacteristic 18th; the road to victory lane wouldn’t be an easy one. 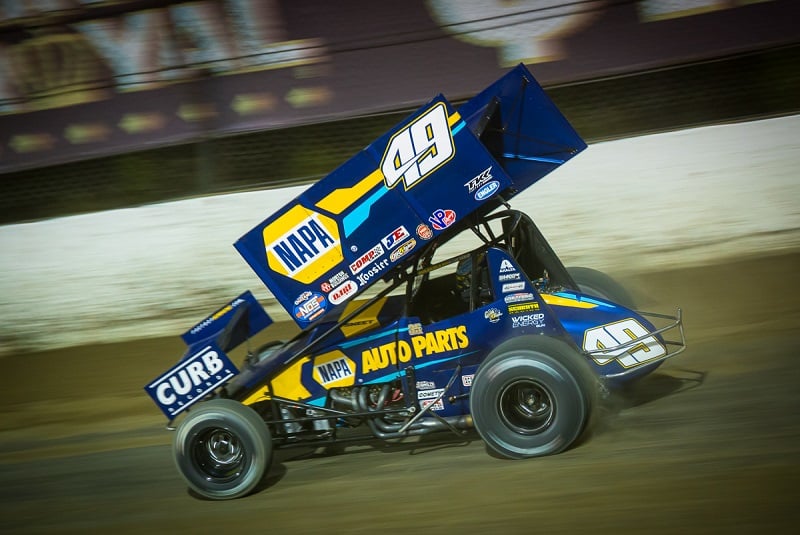 Sweet started fourth in his eight-lap heat race, and after a fourth-to-first pass on the first lap, cruised to the heat race win. The finish gave the current World of Outlaws Series points leader the sixth starting position for the 40-lap feature.

At the drop of the green flag, Sweet maneuvered his Kasey Kahne Racing No. 49 machine into the fourth position. The night’s first caution flag fell on lap three, bunching up the field. 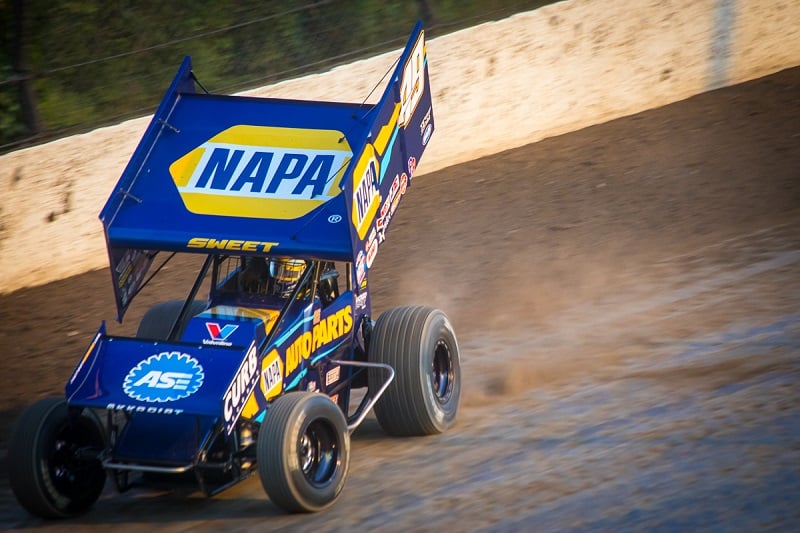 On the ensuing restart, Sweet made the exact fourth-to-first slide job pass for the lead he made earlier in the night during his heat race. Rocketing to the lead, another caution immediately fell, resetting the line-up to the previous lap and putting Sweet back to the fourth position.

When the green flag flew, Logan Schuchart had worked his way up from his 12th starting position, slipping past Sweet, and into the lead. Sweet followed suit and was able to work his way into second by lap 15. Over the next ten laps, Schuchart slowly pulled away from the NAPA AUTO PARTS team and had a 2.5-second lead when a caution flag flew on lap 25.

Due to the length of the race, a red flag was issued, stopping the field as clean-up work took place.

“Honestly, to be dead honest, I didn’t want to see the red,” Sweet said. “I felt like I just found the top in (turns) three and four and Logan hadn’t known about it. I think I found some speed there I was going to be able to make some moves with. We didn’t touch the race car, we put five gallons of fuel in it. I told my guys I was just going to put it to the fence and go for it.”

On the restart with just 15 laps to go, Sweet powered by Schuchart on the outside line and drove away, earning his second-career Kings Royal victory, his 11th Outlaws win of 2019 and 45th career series victory. 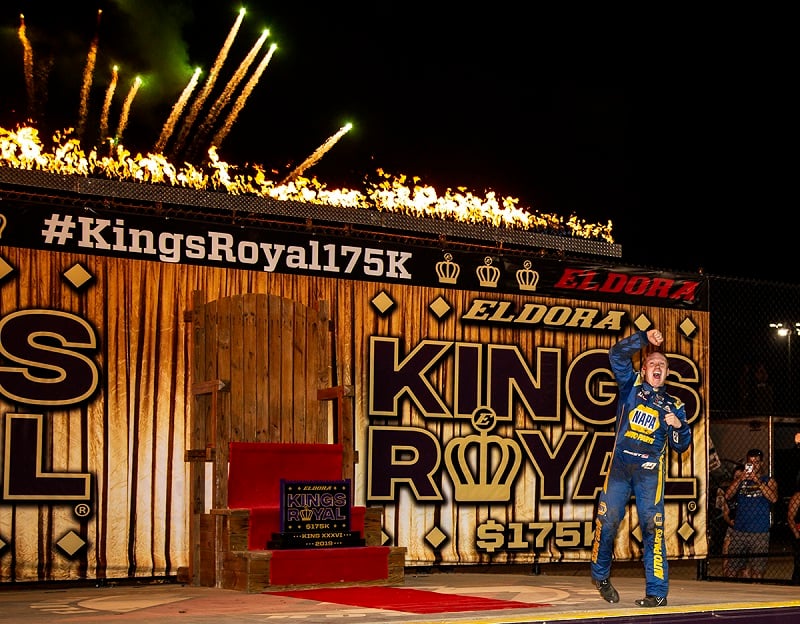 “Sprint car racers make money based off how they finish,” Sweet said. “When you have a race that pays $175,000 to win and basically $20,000 for second, it’s kind of all or nothing coming in here. I’m a fan of it. It’s nerve-racking. It gets the fans’ attention. It’s what we need in this sport.

“It’s intense all night long. All-day. Under the red. Basically, if you don’t win the race, it’s a missed opportunity. You only get so many of these opportunities. So, I’m just happy and want to cherish the moment.”

On Tuesday, July 23, the World of Outlaws NOS Energy Drink Sprint Car Series will be at Lernerville Speedway in Sarver, Pennslyvania, for the $25,000-to-win Don Martin Memorial Silver Cup.

Next Race: July 23, Lernerville Speedway, Sarver, Pennsylvania
How to Watch or Listen: www.dirtvision.com