Your car’s battery plays a central role in getting your car started every morning and keeping it running reliably, but it won’t last forever. So, when it reaches the end of its electrical life, can a car battery be recharged? It can, but you have to know how and when to recharge it, as opposed to just scrapping it for a new one.

The car battery is one of the most well-known components under the hood, but it doesn’t operate alone. It works closely with the alternator to start the engine and run lights and other accessories. The battery only needs to send enough power to the starter to get things going, and the alternator takes it from there.

Because that initial start-up request is really taxing, the alternator also recharges the battery as the car is running. That’s why it’s better to take daily trips of at least 20 minutes to get the battery back above an 80% charge. In that sense, your vehicle automatically recharges your battery every day. However, if your alternator isn’t working properly, the battery can be under- or overcharged, which is a problem.

Batteries can go bad for a number of reasons, but depending on their condition, they can also be recharged and continue to work properly. Charging a battery can happen in a couple different ways, but the most popular method, especially if you’re in a hurry, is a jump-start. This involves using jumper cables to connect your battery to another vehicle’s battery, giving it the power to start up and let the alternator do its magic. Make sure you’ve fully read up on how to safely jump-start a car before attempting it.

Can a Car Battery Be Recharged?

To decide whether a recharge is appropriate, consider the overall condition of your battery: If it’s still new, not showing other troubling symptoms and you aren’t having to jump it every time you try to start it, a recharge is probably the answer. Make sure the dead battery wasn’t caused by leaving lights on or other parasitic drains, and you should be good for a while. 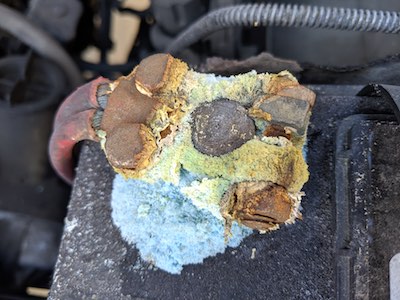 However, some signs point to bigger battery problems. For one, they will simply go bad over time, so if the battery is four or more years old, consider a swap (or risk a no-start situation at the worst possible moment). Also, look for bulging sides, residue buildup at the terminal connections, a sulfuric smell, slow or tough starts in the morning, dim or flickering lights, frequent jump-starts and not starting at all. In these situations, a recharge is a short-term solution, so you’ll need a new battery.

A great way to tell if your battery has reached the end of its life is to take your vehicle to your local NAPA AutoCare for a battery load test. They will tell you about the battery’s remaining capacity and if it’s worth it to recharge.

Check out all the battery chargers available on NAPA Online or trust one of our 17,000 NAPA AutoCare locations for routine maintenance and repairs. For more information on car batteries, chat with a knowledgeable expert at your local NAPA AUTO PARTS store.

NAPA Know How Blog Can a Car Battery Be Recharged?