An oxygen sensor is an important part of your vehicle’s emission control system. Simply put, an oxygen sensor measures the amount of emissions released from your vehicle and sends that information to your car’s management computer located within the engine. Your car has at least two sensors, and when one of them goes bad, you need to do something about it. Can you clean an oxygen sensor? No, despite what you might have heard or read, such sensors should be replaced when they become faulty.

Likely, you won’t know something is wrong with an oxygen sensor until an emergency code appears on the dashboard. Otherwise, your car may run poorly with a noticeable drop in fuel efficiency. 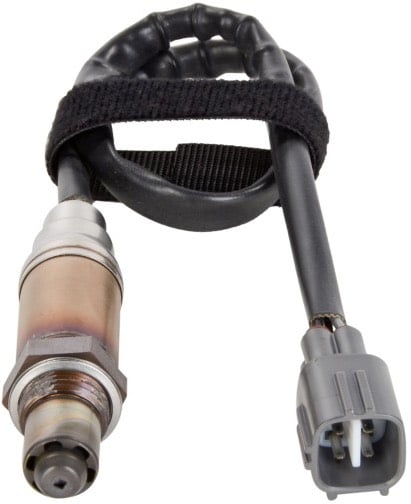 The number of oxygen sensors present vary according to engine type. Typically, you’ll find two sensors on transverse four-cylinder engines — one is located upstream, the other downstream. Inline four-cylinder engines, inline-six and V6s, and V8 engines have three sensors apiece, with one located on each engine bank and a third found downstream. Transverse-mounted V6 and V8 engines have four sensors, including one on each bank, one downstream and the fourth found at the rear of the engine.

All you need is for one faulty oxygen sensor to cause problems for your vehicle. Thus, you must identify which sensor is defective.

You may have found information online on how to clean an oxygen sensor. Usually, these instructions are quite detailed, explaining how to carefully remove the sensor, apply a cleaning agent and return the unit to its previous location.

However, this information is misleading as oxygen sensors are designed for replacement, not cleaning. No car manufacturer supports cleaning sensors. In fact, you always risk voiding a warranty if you attempt to clean a sensor and something goes wrong later. If you find that your car has a faulty oxygen sensor, here’s how you can replace it.

Oxygen sensors may be tested for effectiveness. The way this works is that a digital voltmeter and back probe are used. Once the surrounding wires are inspected and ruled out as a possible problem, then start the car and allow it to run until the engine exhaust temperature hits at least 600 degrees Fahrenheit.

The voltmeter and back probe are then used to measure a set number of points under specific conditions. As you might imagine, experienced mechanics are often called upon for oxygen sensor testing. This will also ensure that the correct faulty oxygen sensor is identified and replaced, saving you money.

Can you clean an oxygen sensor? Yes, technically you can. But it’s not recommended as the component is meant to be replaced when an issue arises. Cleaning an oxygen sensor takes more work than replacing the component, and after locating the part and checking if it’s working effectively, going down the route of replacing it adds peace of mind for the future.

Check out all the relays, sensors and switches available on NAPA Online or trust one of our 17,000 NAPA AutoCare locations for routine maintenance and repairs. For more information on how to replace your car’s oxygen sensors, chat with a knowledgeable expert at your local NAPA AUTO PARTS store.

NAPA Know How Blog Can You Clean an Oxygen Sensor?