GAINESVILLE, Fla. (March 16, 2014) – The NAPA AUTO PARTS Dodge Charger R/T Funny Car team made another stride toward championship contention Sunday when it advanced to the semifinals of the 45th annual NHRA Gatornationals at Gainesville, Fla. 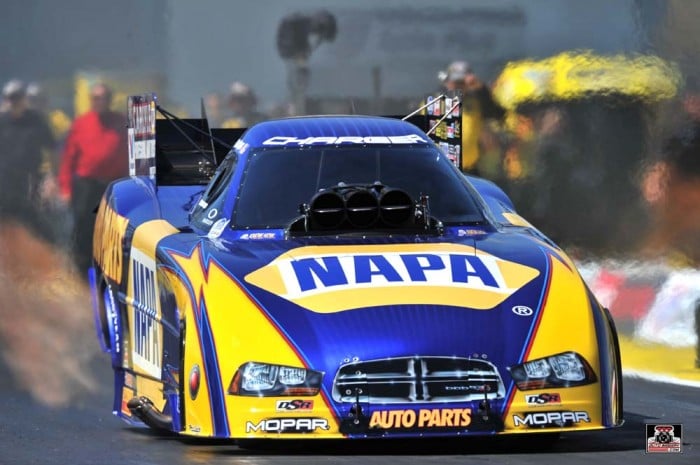 Tobler and Collins had been assisting with the running of Johnson’s team until a permanent crew chief was in place.

“It was great to have Tobler be able to concentrate solely on our NAPA Dodge and having Eric with us,” Ron said. “It was pretty cool seeing John Collins over there on the Make-A-Wish Funny Car and running his own team. Having John as a crew chief and Eric with us really is going to help our whole program at DSR.”

Ron moved up two spots to seventh in the NHRA Mello Yello Drag Racing Series standings heading to Las Vegas for the next event in two weeks and is a little more than one round victory out of third.

“We really needed to make a few points up and climb up in the points so it’s good. Now we can focus on Vegas.”

“It was a nice feel-good weekend for us. We had (NAPA director of events and sponsorships) Mike Rearden and his wife in the house with us, and that’s always great. “

(Unofficial, Through Gainesville, third of 24 events; DSR drivers in CAPS)