JUPITER, Fla. (Jan. 17, 2014) – Ron Capps likes nothing more than to sing the famed NAPA Know How jingle in the winner’s circle at NHRA national events. Capps and crew chief Rahn Tobler looked in winning form on Friday evening at Palm Beach International Raceway (PBIR) during the first day of the PRO Winter Warm Up in South Florida. 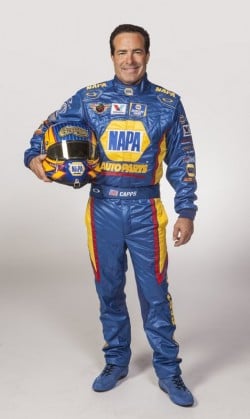 Capps, Tobler and the NAPA Auto Parts Dodge Charger R/T Funny Car team flashed the form that saw them win eight NHRA races over the last two seasons when they led the floppers after day one of the preseason testing event with a stout lap of 4.003 seconds at 320.28 mph. Capps clocked the quickest elapsed time in NHRA history at 3.964 seconds in June 2012.

“I’m really happy for (Rahn) Tobler,” Capps said. “Everyone was pretty much beating their heads against the wall the past few days and all the guys here at the track worked so hard to get this track in great shape. It tells you what kind of mentality Tobler has. He stuck to what he wanted to test on this NAPA Dodge and he wanted to get it right before we went to Pomona and we were able to do that.

“This PBIR track is well within record-setting conditions and this track is as good as any we’ll see on the NHRA circuit and I’m excited for Saturday. Somebody is going to go quicker than a national record in both classes and I hope it’s us. It’s a great way to start the year off for NAPA and our team.”

After three days of struggling with unseasonably cool Florida temperatures and a finicky all-concrete strip, the DSR teams seemed to get a handle on the PBIR track on Friday afternoon. Capps notched elapsed times of 4.044 and 4.003, while 2011 NHRA Funny Car champ Matt Hagan notched consistent runs of 4.098 and 4.072 in the freshly painted Mopar Express Lane Dodge.

Spencer Massey in the Battery Extender Powered by Schumacher dragster ran 3.790, while Tony Schumacher, the winningest driver in Top Fuel history, and his U.S. Army team used the two PBIR PRO Winter Warm Up passes to test new components on the Army dragster.

“It was a good boost of confidence for this Matco Tools team here at DSR,” Brown said. “More and more cars are getting down the track running really good ETs. We’d like to be low and quick of the session, so tomorrow we’ll go to work a little bit harder and get after it a little bit more and see what we got for (Shawn) Langdon. We don’t want to be second, we want to be the quickest. But it was a great job by the entire Matco/Toyota team. It was a good day.”

The following are the DSR team results and other event information for the PBIR PRO Winter Warm Up.