But part of the 21-year veteran driver for Don Schumacher Racing might not mind if the season lasted a little longer.

The NAPA team led by crew chief Rahn Tobler and assistant Eric Lane finished strong after a fast start with two early season wins by winning their only No. 1 qualifying position of the 24-race season on Saturday with a time of 3.886 seconds at 326.57 mph, and then improved on that during championship eliminations to briefly hold an NHRA Funny Car record: a quickest ever elapsed time of 3.885 (326.87). 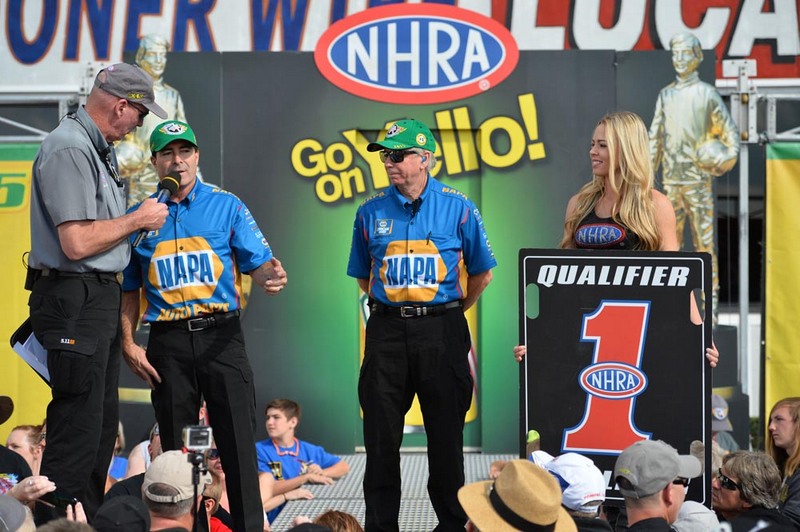 Their day ended, however, in the semifinals when the NAPA Dodge lost traction for the only time during six runs at Pomona. Their string of five straight 3-second passes also ended.

“We would have loved to win the Finals for the first time but I can’t say enough about how hard Tobler and our NAPA guys have worked to get this car consistent and putting 3s on the board so many times in the last part of the Countdown (to the Championship playoff). 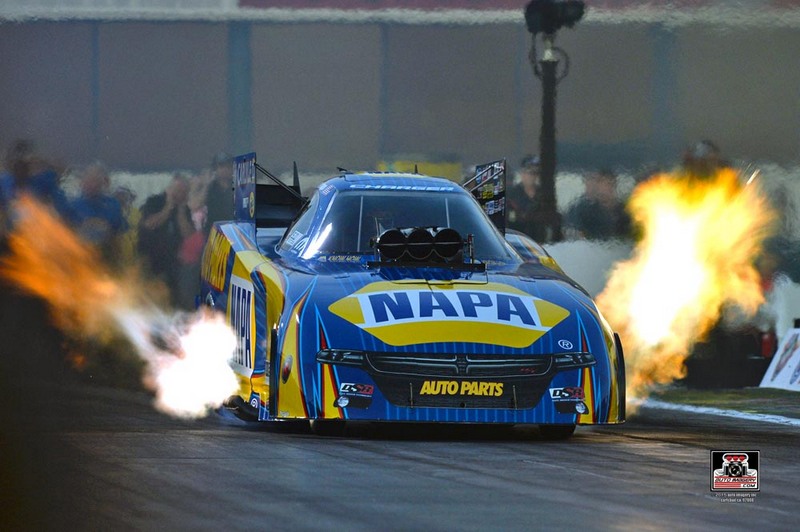 “I thought our run to be the No. 1 qualifier Saturday night was strong but Tobler came back today and put me on another ride I won’t forget.”

The NAPA team played a pivotal role in determining the 2015 Funny Car world championship although it was eliminated from contention after points leader Del Worsham of Kalitta Motorsports and DSR teammate Jack Beckman, respectively ranked first and second in points, qualified Saturday for eliminations. 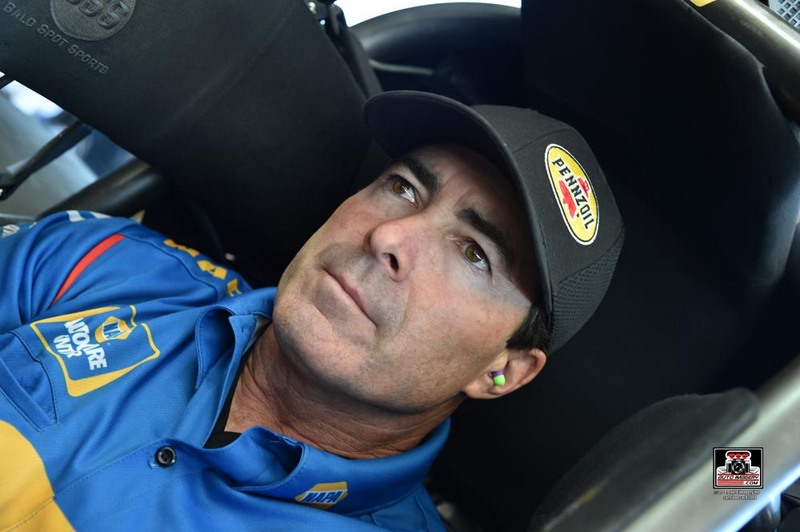 The NAPA team eliminated Beckman in the second round of eliminations two weeks ago at Las Vegas and Sunday briefly took a potential 20-point bonus from Beckman who set a time record on Saturday and backed it up in the first round at Pomona.

Beckman and the Infinite Hero Dodge produced a time of 3.897 seconds to open Sunday’s racing that was quick enough to back up its run of 3.890 from the night before. 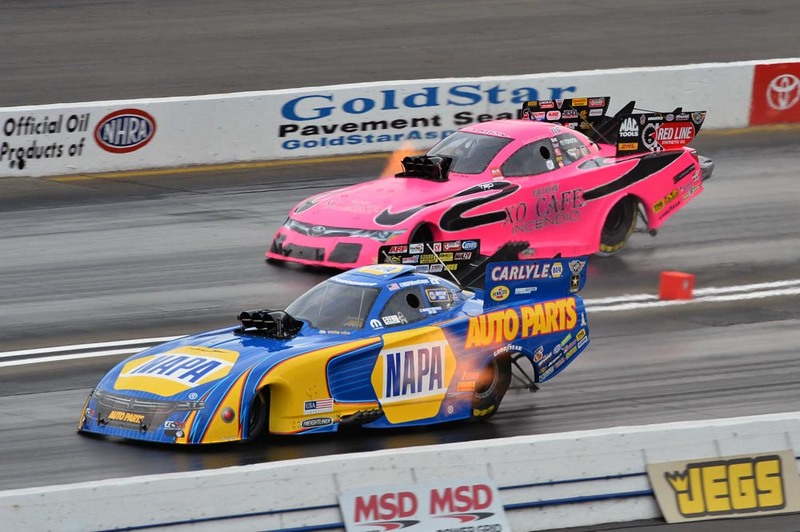 But the NAPA team opened the second round with a time of 3.885 to take the record away because it backed up his pole winning time of 3.886.

Unbelievably, Beckman was in the next pair to run and produced a time of 3.884 – one-thousandth of a second quicker than Capps – to take the record back and eventually earn the bonus points although a loss to Worsham in the semifinals gave the championship to Worsham. 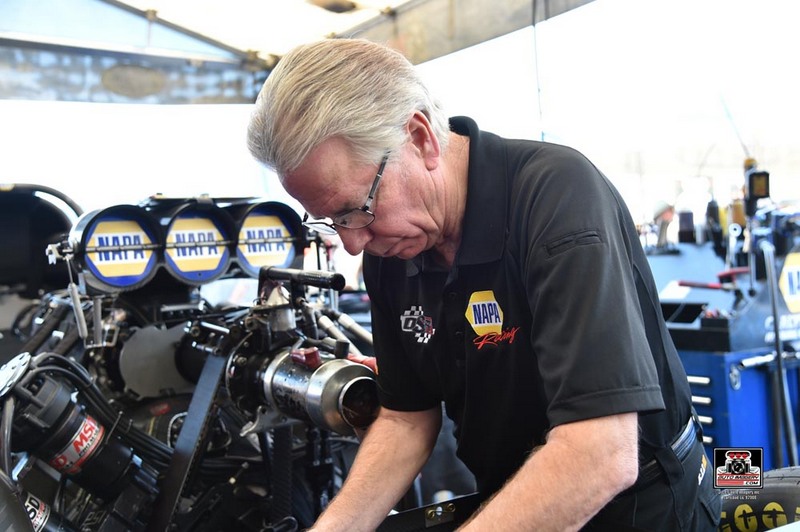 “We didn’t like beating Jack at Las Vegas and I don’t like that it would have hurt his chances if he didn’t get the record back,” Ron said. “But at DSR, Don doesn’t give crew chiefs orders to lay down to help one of our other teams. And we owe it to NAPA to always run the best we can.” 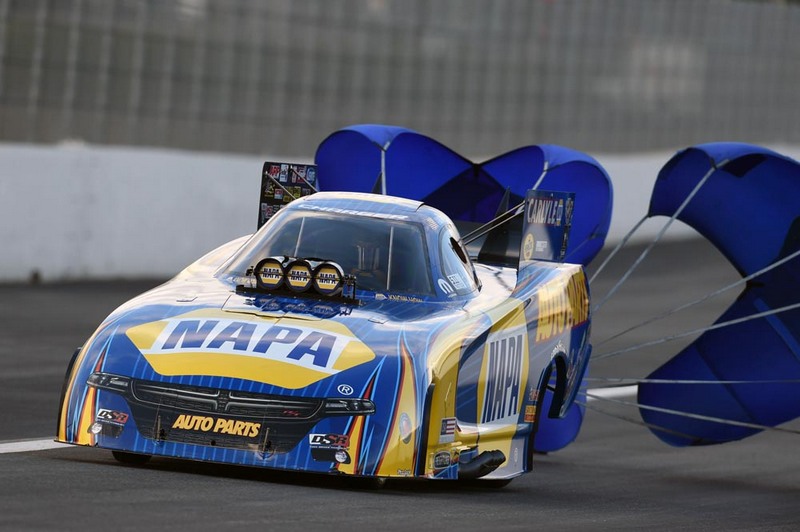