Those ‘frenemies’ share the same data and same home base in Brownsburg, Ind. as his NAPA AUTO PARTS team led by crew chief Rahn Tobler and assistant Eric Lane.

His first round match-up with Don Schumacher Racing teammate Matt Hagan was more suited for a final-round battle. Capps and Tobler used their best NAPA Know How to produce low elapsed time of the round with a 4.073-second pass at 311 mph for their first win light of the day.

“I’m sure our boss Don isn’t the happiest to see his cars all paired up like that,” Ron said.  “Ideally we would love to be qualified 1, 2, 3 and 4 and meet up in the semifinals but it just doesn’t always happen like that.

“To take a positive from this weekend we qualified well and had lane choice. We beat a very good team in Dickie Venables’ Rocky Boots team. That’s a championship team and they can run as good as anybody. To have them first round, that’s a test. Once again Tobler showed his NAPA Know How and we ran the quickest ET of all the Funny Cars in that round.” 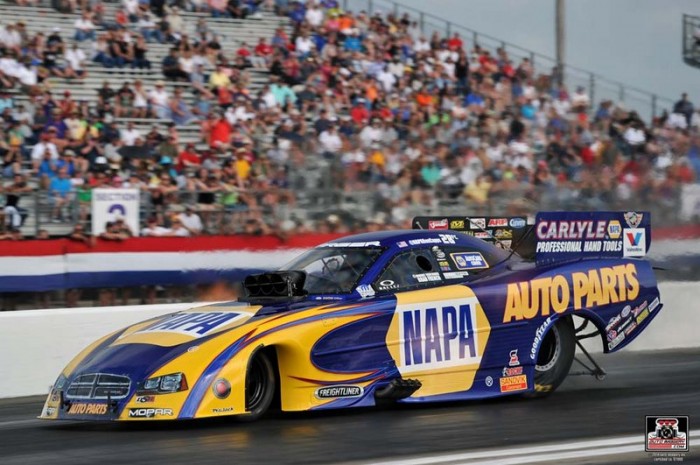 Then the NAPA team was paired with another DSR teammate in Tommy Johnson Jr. and John Collins, who was Tobler’s assistant crew chief until the Gainesville event in March when team owner Don Schumacher named Collins the tuner of the Make-A-Wish Dodge.

Again, Capps got the win light over another DSR car with a 4.177-second lap at 294 mph. That round win earned him a match-up with DSR’s Jack Beckman where Capps’ NAPA Dodge Charger R/T went into early tire smoke that ended their day. It was Capps’ third semifinal finish in six NHRA Mello Yello events this season.

“It hurts,” he said. “Anytime you lose, when you don’t make it to the final and win but you have to take the positives and we had a pretty good weekend. We went to another semifinal and racked some points up and are staying near the top. That’s confidence for Rahn (Tobler) and Eric (Lane) but that’s also a lot of confidence for the driver as I’m getting more comfortable in this car. Again, we have a win coming soon. I’ve said it before but I really believe it.”

Ron now shifts his focus to getting that win near NAPA headquarters, May 16-18, at Atlanta Dragway in Commerce, Ga. Capps scored the emotional win at the Atlanta race in 2012 with many from NAPA headquarters in attendance to root him on.

“Atlanta is coming up in a couple of weeks and that’s the corporate headquarters for NAPA and we’d love to win there again like we did a couple years ago. I never have a lack of confidence going anywhere with the team that we have.”