The winner of 42 NHRA event titles in his career including the one two weeks ago at Epping, N.H., is only 11 points out of third and 28 out of second place in the NHRA Mello Yello Drag Racing Series standings at the midpoint of the 24-event season.

Continuing his steady climb up the standings on the strength of consistency that includes his sixth semifinals finish of the season on Sunday near Chicago, Ron has an even greater drive when his Rahn Tobler-led NAPA AUTO PARTS Dodge Charger R/T team arrives at the northern Ohio track.

Ron will be flying a red, white and blue paint scheme to complement his NAPA colors on the 320-mph stage over the Fourth of July weekend to help kickoff the month-long “NAPA Get Back Give Back” campaign to raise funds for the Intrepid Fallen Heroes Fund that provides support for the families of U.S. military personnel lost in service to our nation, and for those severely wounded in the performance of their duties in Afghanistan and/or Iraq.

How you can help the NAPA Get Back Give Back campaign: 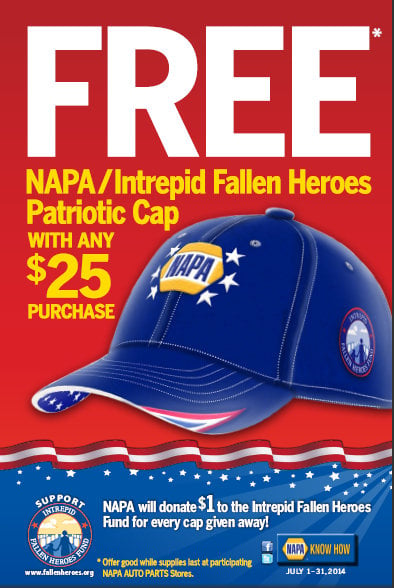 “There’s no greater honor than to celebrate our Independence Day by having the Stars and Stripes on our NAPA Dodge as a salute to American heroes and to help those who gave much more than anyone could have asked,” he said.

“Our NAPA team works hard trying to win every race we enter but when we’re helping NAPA help the Intrepid Fallen Heroes we push even harder. The more runs we win on Sunday at Norwalk means the more our fans will learn about the Fallen Heroes during the ESPN2 show.”

As the second half of the season begins only six events remain before the top-10 drivers are determined to be contenders in the six-race NHRA Countdown to the Champion that begins Sept. 12-14 at Charlotte.

“We’re getting our mojo back at DSR,” Ron said after his semifinals loss Sunday to teammate Matt Hagan who went on to give DSR its third straight Funny Car event title.

The teams faced humid, hot conditions last weekend near Chicago. The NAPA team only made one complete pass in four qualifying tries but it was a stellar time of 4.040 seconds that earned the No. 6 seed. Tobler and assistant crew chief Eric Lane formulated a tune-up for Sunday that enabled Ron to win in the first-round then followed up by eliminating points leader Robert Hight before Hagan was able to slip passed by 7 feet at the finish line with both cars racing at 305 mph.

“I’m just excited to go right to Norwalk,” said Ron, who has not been to the winner’s circle at the track but has advanced to the championship round twice including a year ago. “We’ll see more hot conditions and with what Tobler learned at Joliet we’ll be ready.

“We showed ourselves that we can bounce back from a difficult qualifying performance. That’s when a team shows heart. When things are going good and everything is clicking then everybody is in a good mood but when you’re struggling a little bit you find out what your team is all about.”

NAPA GET BACK AND GIVE BACK

The NAPA Get Back and Give Back program is underway and customers have several ways to benefit from special offers while helping to contribute to the Intrepid Fallen Heroes Fund.

NAPA will donate $1 to Intrepid for every qualifying rebate redeemed by consumers in July. Consumers also can select to donate (in $5 increments) part or all of their earned mail-in rebate that ranges from $5 to $25  when purchasing a new battery, starter or alternator.

Special “NAPA We Believe in Heroes” T-shirts and support bracelets can be purchased at NAPAonline.com with all proceeds benefiting the Intrepid Fallen Heroes Fund.

That’s not all, during the month of July, consumers will receive a free NAPA Racing/Intrepid Fallen Heroes Patriotic cap with any $25 purchase at participating NAPA AUTO PARTS Stores and NAPA will donate $1 to Intrepid for every cap given away.