Today’s vehicles are made up of a number of systems working together in harmony. It would be impossible to remove one of these systems (fuel, for example) and still have a car that drives. So while you can’t necessarily say the car electrical system is the “most important,” it does come pretty close — especially as the technology veers toward a hybrid and electric future. Here is a quick overview of electrical system components and a look into how conventional gas engine-powered vehicles use electricity.

“Electricity” refers to electron flow through a circuit where one end is positive and the other negative. Actually, every object has an electrical charge, but most are so small they are impossible to detect. To power something like a motor, we have developed man made chemical cells with high electric potential: batteries. Batteries in turn lend power to starting, charging and security systems, lights, ABS, computers, sensors, climate control and onboard accessories. They are probably the first thing you think of when you hear about electricity in automotive applications, but batteries are far from alone in running the system. 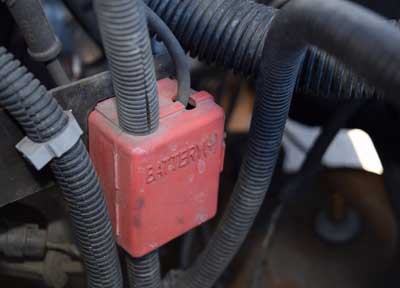 There are two types of electricity, alternating current (AC) and direct current (DC). When batteries discharge they emit a constant DC power in one direction, supplying electricity through the positive terminal to the negative. Most automotive components require this DC charge to work properly, but it is limited because batteries will eventually discharge completely, with no remaining power to give.

To address this problem, cars also have alternators. Alternators are actually small generators capable of turning mechanical into electrical energy. Driven by the engine belt, alternators use a small signal from the battery to energize a field current that turns a rotor inside a set of stators. Since this energy is driven by the polarity of magnetic fields, the current produced as a result changes direction as the rotor turns, producing current in opposite or alternating directions (hence AC). Alternators produce significantly higher currents than initially supplied by the battery, so they are used to recharge the battery itself and power other electrical components.

Most components, however, require DC current to run. The solution is a set of diodes that serve as a kind of electrical check valve for current coming out of the alternator. Diodes only allow current to flow in one direction, so when AC goes in on one side, only DC comes out on the other.

The other major issue within a car electrical system is that not all components tolerate the same amount of current strength or amperage. Therefore, the system must include voltage regulators and fuses to moderate flow and protect components that cannot handle the amperage supplied by the alternator. Fuses protect circuits when placed in front of the load (component). If a voltage spike causes too much amperage sent to the headlights, a fuse designed to “blow” at 15 amps will do so, preventing the current from continuing on to cook the headlight itself.

The electrical system is a complex but essential part of what keeps your car starting, running, charging and doing the little, but important, things like locking the doors. And while voltage in automotive systems is much lower than say, household applications, it’s still important to enlist the guidance of a professional when making a diagnosis or beginning repairs because many components are extremely sensitive and can be easily damaged without proper training and knowledge.

Check out all the electrical system products available on NAPA Online or trust one of our 17,000 NAPA AutoCare locations for routine maintenance and repairs. For more information on the car electrical system, chat with a knowledgeable expert at your local NAPA AUTO PARTS store.