PATRIOTIC PAINT SCHEME: After a two-week hiatus, primary partner NAPA AUTO PARTS is back on the hood of Chase Elliott’s No. 24 Chevrolet SS. This weekend, however, Elliott’s NAPA AUTO PARTS Chevy will sport a brand new look. Elliott will pilot a patriotic paint scheme that features stars and stripes.The scheme will help to kick off NAPA’s “Get Back and Give Back” effort while boosting awareness for the Intrepid Fallen Heroes Fund (IFHF).

GET BACK AND GIVE BACK: NAPA AUTO PARTS has a long history of supporting the men and women of the United States Armed Forces and their families. In February, the company announced that it had raised more than $2.1 million for the IFHF through its annual “Get Back and Give Back” campaign. The “Get Back and Give Back” campaign kicked off in 2012 and gives NAPA AUTO PARTS patrons the opportunity to contribute to the IFHF by purchasing T-shirts on NAPAonline.com. In addition, customers who spend $25 or more at NAPA AUTO PARTS receive free NAPA/IFHF hats, with NAPA donating $1 to the IFHF for every hat given away. NAPA AUTO PARTS also donates $1 for each redeemed mail-in rebate for batteries, alternators and starters purchased in July, and $2 for qualifying installations. Customers also have the ability to donate all or a portion of their mail-in rebates directly to the IFHF. One hundred percent of the donation goes to the IFHF’s mission of building nine Intrepid Spirit centers around the country. 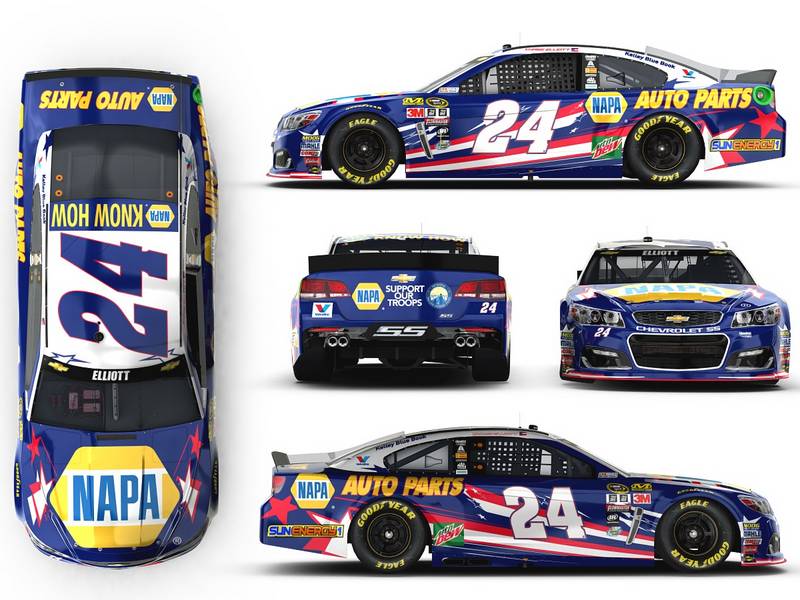 SEASON STANDINGS: Elliott currently sits eighth in the standings with 482 points. The rookie trails points leader Harvick by 83 markers. The 20-year-old is younger than any other driver currently inside the top 16 – the amount of drivers NASCAR takes into its playoffs – while also being the highest ranked rookie.

TOP-RANKED ROOKIE: Elliott leads the 2016 Rookie of the Year contender standings heading into Kentucky by 49 points over second-place Ryan Blaney and 88 points over third-place Brian Scott. Elliott has accumulated a total of 237 rookie points this year through the first 17 points-paying races. Among active drivers, his 11 top-10 finishes are tied with teammate Jimmie Johnson’s for the most top-10 finishes through the first 17 races of a rookie season.

TOP-10 TEAR: Elliott earned his career-best finish last month at Michigan International Speedway, when he led 35 laps en route to a second-place finish. Only two drivers in the NASCAR Sprint Cup Series have more top-10 finishes than Elliott’s 11 (Harvick with 13 and Kurt Busch with 14 — both Sprint Cup champions). Additionally, Elliott is tied for the third-most top-five finishes in the Cup Series with his six top-five finishes, trailing Kyle Busch (10), and Harvick, Brad Keselowski and Joey Logano with seven top-five finishes.

“It’s hard to believe we’re already halfway. It seems like the year has gone by pretty quick. I think the repave is going to be a little bit of a question mark for everybody so I’m excited to check that out. I’ve heard some good things so I hope that they’re true.” Chase Elliott on racing at Kentucky

“I’ve been very fortunate to have the Intrepid Fallen Heroes Fund on the car the past few years. I appreciate NAPA doing that. I think it’s a good cause. It is definitely a treat to have those guys on our car and to do a special paint scheme for them.” Elliott on his patriotic paint scheme