At the age of 19 years, four months and one day, Elliott, will become the 12th youngest Cup Series driver to debut in the sport.  He will be the youngest Cup driver to debut since Joey Logano at New Hampshire Motor Speedway on Sunday, September 14, 2008 for the Sylvania 300, when he was 18 years, three months and 20 days young. 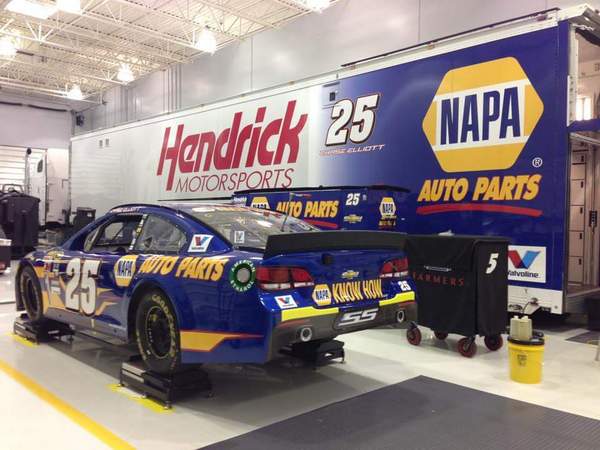 It will be familiar territory for Elliott Sunday at Martinsville.  In two previous NASCAR Camping World Truck Series starts, Elliott completed 100% of his total laps run (450), with an average finish of 13th at the oldest and shortest (.526-mile oval) in-use NASCAR facility.  His Martinsville track debut came on Saturday, April 6, 2013 in the Hendrick owned No. 94 Chevrolet, finishing sixth.  His second attempt at the “paperclip” was Saturday, October 26 where he finished 20th.

NAPA AUTO PARTS will serve as Elliott’s primary sponsor on the No. 25 Chevrolet SS on Sunday.  NAPA will continue to be the principal sponsor for Elliott for his four remaining Cup races at Hendrick Motorsports in 2015 (Saturday, April 25, at Richmond International Raceway; Sunday, May 24, at Charlotte Motor Speedway; Sunday, July 26, at Indianapolis Motor Speedway; and Sunday, September 6, at Darlington Raceway).

Weekend Expectations:
“As far as expectations go, I don’t really know what to expect.  I just want to go out and give it all I’ve got.  It really hinges on me giving all the guys everything I possibly can to put us in position.  If it wasn’t for NAPA AUTO PARTS, we wouldn’t be here with this incredible opportunity.  So it means a lot they are committed and giving me the opportunity to go do something I love.”

Weekend Goals:
“If we could go run all the laps, stay on the lead lap and be inside the top-15 at the end of Sunday’s race, I’d say that would be a day well done, across the board.  This is something I’ve wanted to do ever since I can remember.  It has been a dream of mine and to have an opportunity to race in the Cup Series.  And to represent Hendrick Motorsports at Martinsville in the process, words cannot describe the feeling I have at the moment.  I’m just ready to get there and get the job done.”