CAREER-BEST FINISH: Chase Elliott earned his career-best finish earlier this month at Michigan International Speedway. Elliott led 35 laps en route to a second-place finish. The runner-up result not only marked his career-best finish, but it also continued his top-10 tear. The Dawsonville, Georgia, native has earned a top-10 finish in each of the past six NASCAR Sprint Cup Series points-paying races. Only two drivers in the NASCAR Sprint Cup Series have more top-10 finishes than Elliott’s 11 (Kevin Harvick with 12 and Kurt Busch with 13 — both Sprint Cup champions). Additionally, Elliott is tied for the third most top-five finishes in the Cup Series with his six top-five finishes, trailing Kyle Busch and Harvick with nine and seven top-five finishes, respectively.

SEASON STANDINGS: Elliott currently sits sixth in the standings with 453 points. The rookie trails points leader Harvick by 73 markers. The 20-year-old driver is younger than any driver currently inside the top 16 – the amount of drivers NASCAR takes into its playoffs – while also being the highest ranked rookie.

TOP-RANKED ROOKIE: Elliott leads the 2016 Rookie of the Year contender standings heading into Sonoma by 49 points over second-place Ryan Blaney and 84 points over third-place Brian Scott. Elliott has accumulated a total of 216 rookie points this year through the first 15 points-paying races. Among active drivers, his 11 top-10 finishes are the most through the first 15 races of any Sprint Cup rookie season. 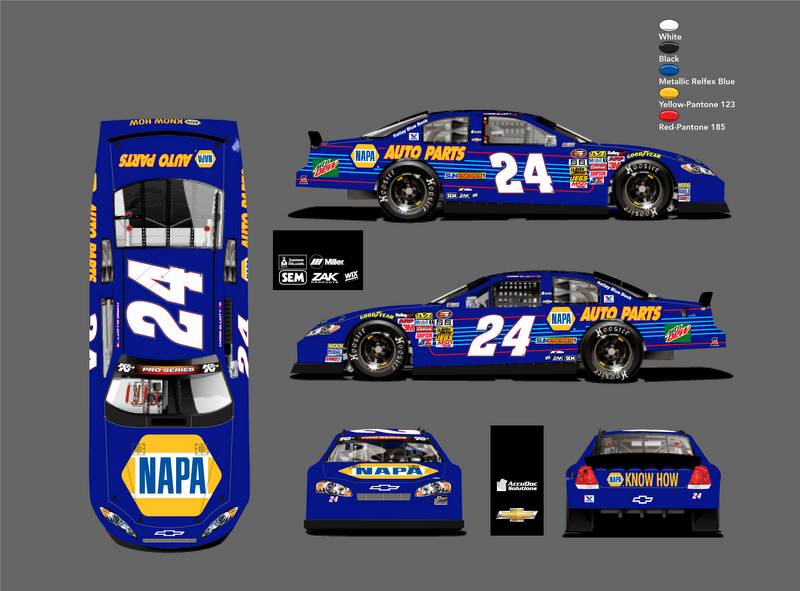 ROAD COURSE ROOKIE: Elliott will make his Sprint Cup road course debut this weekend at Sonoma Raceway, but before the road course rookie gets behind the wheel on Sunday he will have a race in the books at the Sonoma track. He is entered to compete in Saturday’s NASCAR West Series race, marking his first start of the season in NASCAR’s western home track series. The 20-year-old driver has competed in six road course races in NASCAR’s XFINITY Series, earning four top-five finishes. He has also competed in one Camping World Truck Series road course event and three ARCA Racing road course races, earning one victory and three top-five finishes, respectively.

FATHER’S DAY CONTINUES: While most drivers spent last weekend with their dads, Elliott and his father Bill Elliott will get plenty of time together this weekend as the elder Elliott takes on the role of second spotter for his son. A NASCAR Hall of Famer and 1998 NASCAR premier series championship driver, Bill Elliott owns one victory and 10 top-five finishes on road courses in his career and is looking to help his son excel at the 10-turn track this weekend.

“I’ve been getting a lot of input from Alan and my teammates about how to get around the track and my goal this week is to maximize all of our pre-race meetings as much as possible. I’ve spent a lot of time with Jeff since he has a lot of experience and success there. Getting his insight, looking through his notes and talking about his braking points and shift marks – all of that is very valuable. I’m going to race the West event out there to get some extra laps as well.” – Elliott on his preparation for his Cup road course debut