Not since the 707-horsepower 2015 Dodge Challenger SRT Hellcat broke cover have we seen anything like this super-powered sport coupe. Neither the Ford Mustang nor the Chevrolet Camaro has matched the Hellcat’s performance numbers — only the newly announced 2018 Dodge Challenger SRT Demon can beat it. While all eyes are on today’s market, the current Dodge Challenger Hellcat exists largely due to its predecessor, the 1970 Challenger 426 Hemi. The iconic duo may be separated by nearly a half century, but there are many common aspects of performance that bind them.

Birth of a Sport Coupe

The Dodge Challenger debuted in the fall of 1969 as the Chrysler Corporation’s answer to the Mustang and Camaro. This muscle car was offered in two-door hardtop and convertible body styles and was produced for five years. Several years later, the Challenger name was resurrected and applied to a Mitsubishi-supplied compact car — a fact many enthusiasts would prefer to forget.

Fast forward to 2008 and an all-new Challenger arrives on the market. Based on the same platform underpinning the Dodge Charger and Chrysler 300 sedans, the current two-door coupe borrows its styling cues from the 1970 model. As before, six- and eight-cylinder engine choices are offered along with manual and automatic transmissions.

The original Dodge Challenger offered a whopping eight engine choices, ranging in size from a pair of slant sixes to small, big block and Magnum V8s. The Challenger R/T edition offered a pair of V8s, including a 426 Hemi that provided inspiration for the current SRT Hellcat.

The “Hemi” name indicates hemispherically shaped combustion chambers optimized for efficiency. With a pair of opposing valves in a larger valve area and increased crossflow, the vehicle’s performance improved. Chrysler’s 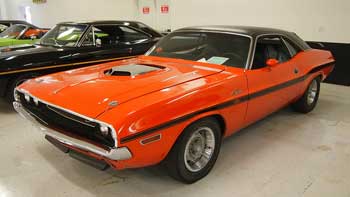 first Hemi was introduced in 1951 with subsequent updates yielding the 426 in 1964 for racing purposes. Later, the engine was adapted for production cars, and it is that famous Hemi that found its way to the Challenger R/T.

The 426 Hemi featured a pair of four-barrel carburetors and was rated at 425 horsepower and 490 pound-feet of torque. Other goodies offered included a 3-on-the-floor full-synchro manual transmission, HD drum-type brakes, wide-tread tires, a Rally package, dual bright exhaust tips and a 3.23 axle ratio.

It was widely known that Chrysler under-reported the original Challenger’s performance numbers with some theorizing that the 426 Hemi delivered up to 500 horsepower. Under-reporting helped consumers affected by high insurance rates. Today, insurance rates are still a factor — but so is performance. With the Challenger’s ongoing battle with the Mustang and Camaro, the 375-horsepower limit of the 2014 model fell far short of the original. Fortunately, Dodge had something else in mind.

Enter the 2015 Dodge Challenger Hellcat. Formally known as the Challenger SRT Hellcat, the new model raised the performance bar considerably. For 2015, Dodge also introduced a 6.4-liter (390 cubic inches) Hemi V8, making 480 horsepower for the R/T Scat Pack, but that wasn’t enough power for some. So, Dodge took its 6.2-liter (378 cubic inches) Hemi V8 and added a supercharger. The result is 707-horsepower machine that beats all Challenger models before it and easily moved past the Mustang and Camaro in the performance wars. Developed by FCA’s Street & Racing Technology (SRT) division, the rear-wheel drive Challenger SRT Hellcat makes 650 pound-feet of torque and is paired with a six-speed manual gearbox or an eight-speed automatic transmission.

Check out all the maintenance parts available on NAPA Online or trust one of our 17,000 NAPA AutoCare locations for routine maintenance and repairs. For more information on the Dodge Challenger Hellcat, chat with a knowledgeable expert at your local NAPA AUTO PARTS store.