Driving an electric car in the winter presents a number of challenges compared to motoring in the warmer months. While battery technology has come a long way, there are still certain aspects of the electric vehicle (EV) experience that change when the temperature drops, and these can have several effects on how the vehicle operates.

Keep in mind, however, that gas-powered vehicles also exhibit very different behavior in the winter — it’s just that drivers are more used to dealing with those changes, and infrastructure is better prepared to handle them.

Let’s take a look at what it’s like to drive a battery-powered car through the coldest months on the calendar.

The batteries in an EV are sensitive to their environment. They have a specific temperature range in which they operate most efficiently — usually between 60 degrees Fahrenheit and 80 degrees Fahrenheit, although it depends on the individual battery system design.

If the weather gets colder or hotter, then the battery’s efficiency drops. Most electric cars have systems that are intended to keep the power pack within its preferred temperature range, but when faced with particularly chilly weather, there’s really only so much that can be done. In fact, some of the heat needed to keep a battery warm is generated using energy from the battery itself, which further reduces the amount of energy available to operate the vehicle. 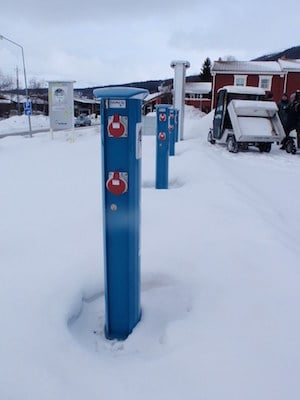 Overall, it’s not unusual to see a 20% to 30% drop in overall driving range when using an electric car in winter. While that might seem like a significant slice, keep in mind that gas-powered engines deal with a similar thermal penalty and consume more fuel in the cold as a result. Winter is hard on all machines, but it’s easier to notice in an EV when you’re staring at the ever-dwindling range display.

Another factor that can impact range when driving an electric car in the winter is the use of climate control. While an internal combustion engine produces significant heat as a byproduct of its operation, an EV’s heater sucks juice directly from the battery. This snatches a few miles away from the drive wheels, as do operating the lights for longer periods (due to shorter days and longer nights) and using the wipers to clear snow and ice.

The final issue affecting winter EV driving has to do with regenerative braking. These systems transfer some of the energy created when slowing a car into electricity that can be fed back into the battery. A cold battery isn’t capable of being recharged efficiently, so some vehicles shut down regenerative systems until it has warmed up. On a short trip, this means you might not get any extra regenerative juice at all. The brake generators also become less efficient in chilly weather, which further cuts into their utility.

Overall, driving an EV in cold weather results in less range, just like in a gas-powered car. Prepare to charge your battery more often, so you don’t get stranded with a depleted battery during the winter season.

Check out all the windshield and glass products available on NAPA Online or trust one of our 17,000 NAPA AutoCare locations for routine maintenance and repairs. For more information on driving an electric car in the winter, chat with a knowledgeable expert at your local NAPA AUTO PARTS store.

NAPA Know How Blog Driving an Electric Car in the Winter: What You Need to Know