The win on the historic quarter-mile oval – which the series had not visited in 38 years – marked the first victory this year for Eggleston, the defending series champion, and the fourth series win of his career.

The Erie, Colorado driver – who started third in the No. 50 NAPA Filters / H20 Fire Protection Toyota Camry – inherited the lead on Lap 142 and held on in a green-white-checkered finish to win by a margin of .422 seconds. 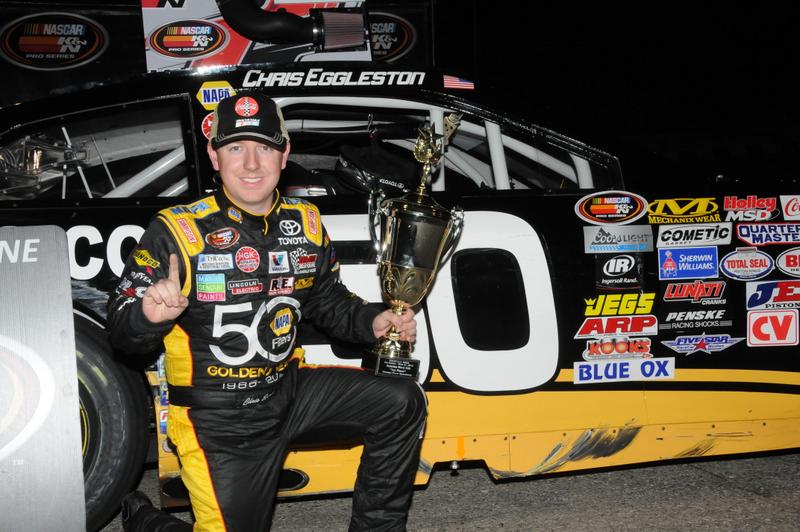 “When we first got here on Friday, we definitely didn’t have the car to win,” Eggleston said. “We struggled, mainly on short-run speed. As the day progressed on Friday, we got better and better on our long-run speed, but we just couldn’t click off our short-run speed. When we went to the top of the chart on that second practice session, I knew we had something to work with.

“When we got rolling on that long run, we were able to keep pace with the 9 car and able to put a little pressure on him, I knew we had a pretty good little hot rod,” he said. “I hate it for the 9 team, that he got taken out by a lapped car. I wanted to pass them fair and square and I think we had the car to do it.

“All these guys at Bill McAnally Racing dug hard all weekend to give me a really fast race car,” Eggleston said. “My hat is off to Paul Kortman and the 50th anniversary of NAPA branded filters. The Toyota was on rails tonight. I’m super proud of these guys and really looking forward to going to Colorado in a couple of weeks.”

Todd Gilliland, who scored wins for BMR in the first two races of the year the No. 16 NAPA AUTO PARTS Toyota, got caught up in an early-race incident and battled back to finish fourth – despite the damage to his car.

Julia Landauer finished fifth after starting eighth in the No. 54 Curb Records Toyota Camry. The fourth BMR driver, Riley Herbst, was caught up in the same incident with Gilliland – but was sidelined for many laps in the No. 19 NAPA Batteries Toyota Camry. He returned to action to finish 16th.

Gilliland leads the rookie standings, while Landauer is second and Herbst is fourth.

The next event on the series schedule will be the Toyota / NAPA AUTO PARTS 150 at Colorado National Speedway north of Denver on June 11.