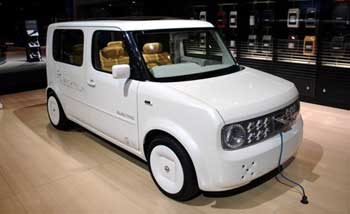 While hybrid vehicles have become a lot more popular over the past few years, entirely electric cars are also emerging as an interesting alternative. From the outside, they may look exactly like a gas-powered vehicle, but underneath the body, electric car components are quite different. Here’s a look at what makes an electric car distinct from a hybrid or gas-powered vehicle.

This one may seem like a no-brainer, but the fuel system is quite different in an electric car. Since they run on batteries, there is no fuel tank in an electric vehicle. Instead, a large bank of batteries is located either in the back of the car or under the floor to improve handling. In their early years, many electric cars were powered by lead acid batteries, which are heavy and take up a lot of space. As technology has improved, however, most electric vehicles use lithium ion batteries, which are substantially lighter and smaller and can produce more energy.

In addition to removing the gas tank, electric cars have no need for a gas engine, which saves a lot of space. Instead, an electric car is powered by a motor. Many manufacturers use DC-powered motors, while some incorporate AC motors into their vehicles. As these motors can produce so much power and their power curve is more linear, electric vehicles do not need a transmission, either. They use a straight axle with a built-in differential to transmit the power from the motor to the wheels. This system is called the drivetrain.

Electric cars share their brake design with their gas-powered cousins, but the way they stop is very different. In a gas-fueled car, the brake pads clamp onto a disc connected to the wheels, which slows the vehicle. In an electric setup, however, the majority of the braking force is produced by the same motor that propels it. Pads and discs are still used to bring the vehicle to a complete stop, but the generation of braking force by the motor is actually used to produce power, much like a generator, to recharge the batteries and extend travel range.

The final area where electric and gas cars differ greatly is in AWD systems. In a gas car, all four wheels are driven through a pair of axles that are linked by an driveshaft that runs the length of the vehicle. In electric cars, however, a second motor is placed on the other axle to drive the front and rear wheels independently. This allows for a much easier transmission of power, as well as more accurate differential power distribution in slippery conditions.

Parked side by side, an electric and gas-powered car can look identical, but they’re completely different animals underneath the hood. From fuel source and storage to propulsion and braking, electric vehicles are not only unique, but also offer some exciting performance and design opportunities that gas-powered vehicles do not.

Check out all the electrical system products available on NAPA Online or trust one of our 17,000 NAPA AutoCare locations for routine maintenance and repairs. For more information on electric car components, chat with a knowledgeable expert at your local NAPA AUTO PARTS store.