Electrical gremlins will get you every time. Even if you are a seasoned professional, shorts, grounds and intermittent electrical issues are frustrating to chase down. Once you find the problem the fix is usually easy, but by then half of your hair is on the floor from being pulled out during the search. Not good. A multi-meter and a test light are required tools for any tool box, but there is a that has changed the way we solve electrical problems and it is called Power Probe.

At first glance, the Power Probe looks pretty simple, and it is, but what it does is remove a lot of the roadblocks that come up when chasing down wiring problems. A multi-meter will tell you if the wire has voltage, but you have to switch leads to determine if it is positive or negative. The Power Probe is powered via the battery (or a 12 volt source) and tells you instantly whether the wire or circuit is live and which side of the circuit you are on, positive or negative. This in itself solves a lot of problems, and there is more.

Since the probe is powered, the tip can provide either a positive or negative charge, allowing you to power a circuit on the fly, without removing the probe first. Just toggle the momentary switch up or down to juice the circuit. If you add the wrong polarity, the buzzer will sound and shut off the juice without popping any fuses. A built-in 10 amp resettable breaker protects the Power Probe from damage as well. The base of the probe has a pigtail attached that provides a constant quality ground, allowing you to assess the ground circuit at the same time.

The Power Probe comes with quite a few accessories, including three bulb socket probes, a fuse panel probe and a nifty backside probe which is great for sliding into the back of insulated terminals. The probe has everything needed to pinpoint problem wires and circuits, but that is only half of the story. The master kit also comes with the ECT2000 circuit tester (which is available separately too). The ECT2000 is unlike any device you have ever seen: it is an electronic sniffer.

What the ECT2000 does is inject a signal into the circuit via the master unit, then the receiver unit is swept over the circuit (a single wire, circuit or a bundle of wires) and it picks up the signal. Where this is important is the receiver can find a break in the signal (an open circuit, like a break in the wire) or a short circuit. A single wire is easy to trace, but a wire bundle is more difficult.

When wires run parallel or are twisted together electrical signals can jump from wire to wire, just like spark plug wires. This is called capacitive coupling and it makes the signal harder to trace as it will jump the open or short. Through capacitive coupling, the signal is considerably weaker. By holding the receiver further away from the wire bundle, the stronger signal prevails, allowing you to trace the wire. One of the best features of this tool is that it not only sniffs out a problem circuit, but will tell you the direction of the problem. This is done by a pair of lights that light showing the direction of the problem.

Getting Down To Business

Using the ECT2000 takes a little getting used to, but once you get the hang of it, electrical diagnostics is easy. We used this system to trace a few wires on a 1963 Buick Le Sabre wagon. We used it to locate the fuel sender signal wire inside the wire harness and traced it through to the dash, letting us get the fuel gauge working. The key to using the Power Probe and ECT2000 is the instructional DVD. The paper manual can’t illustrate the ECT2000’s function like a live demo can. You can watch videos of the unit in use on the Power Probe website. It turned out to be a bad connection at the fuel sender itself. If you have ever had to work on an electrical system, this is the tool you need. 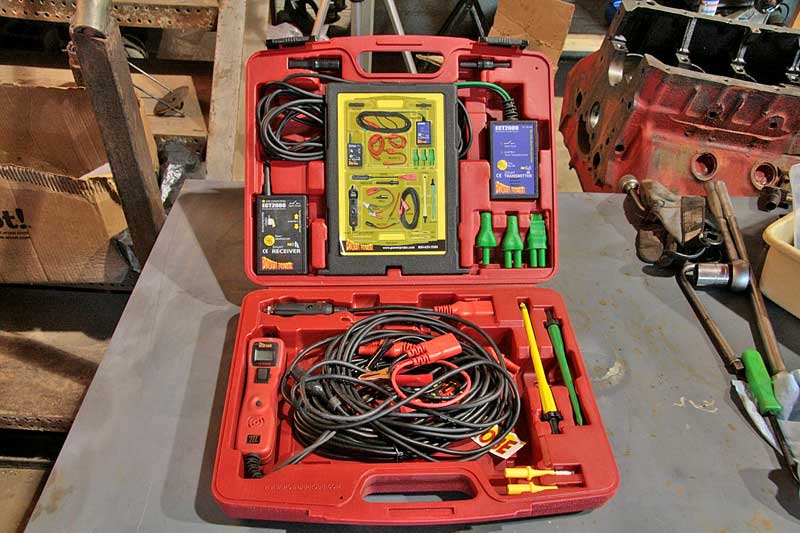 Check out all the tools & equipment available on NAPA Online or trust one of our 17,000 NAPA AutoCare locations for routine maintenance and repairs. For more information on electrical troubleshooting, chat with a knowledgeable expert at your local NAPA AUTO PARTS store.