Anti-lock brakes (ABS) are standard on every new car, but this wasn’t always the case. In fact, despite having been pioneered in the 1970s, it wasn’t until the early ’90s that ABS started to become more common — first as an option, and then as a given for most vehicles. This revolution in safety added a new dimension of protection for modern motorists, particularly during the slippery winter months, and served as the building block upon which more advanced safety systems like traction and stability control were built.

Here’s a look at how ABS keeps you especially safe when driving on snow and ice.

Anti-lock brakes have a very descriptive name. The system allows you to apply maximum brake pressure without any of the four wheels locking up as a result. This is made possible by speed sensors at each corner that measure the rate of spin of a given wheel, allowing the centralized computer controller to apply and back off braking pressures in a split second. By riding the very edge of lockup, this removes the requirement that a driver pump or pulse the brake pedal themselves, while still delivering the best possible stopping power.

Peace of Mind in an Emergency 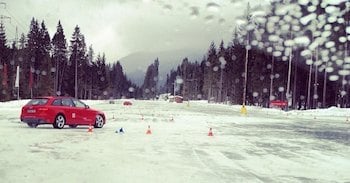 On a snow-covered road where traction is low, being able to avoid brake lock-up means more than just being able to stop in a controlled manner. It also allows a driver to steer during the braking process.

As anyone who’s ever locked up their brakes on ice can tell you, if the front wheels aren’t turning then you won’t be able to adequately steer your vehicle. Lock-up is that much more likely when conditions are slippery, which means in the wintertime anti-lock brakes can be the difference between ending up in a snowbank or being able to safely slow down and avoid an obstacle.

ABS also allows drivers to mash the brake pedal as hard as possible and then concentrate on steering rather than having to juggle traction, lock-up and handling all at the same time. Given that most drivers don’t hit the brakes hard enough to begin with in an emergency situation, anti-lock brakes act as a substantial safety net during winter driving.

As useful as ABS is, it’s even more helpful when it serves as the backbone for other, more advanced safety systems. Electronic traction control features rely on the speed sensors and the ability to individually slow each wheel in order to function correctly. Electronic stability control uses the same technology to keep a car pointed in the safest possible direction. In the winter, traction and stability control systems are put to the test more than in any other season due to the inclement weather and low temperatures associated with the colder months.

The next time you start to fishtail on the ice, don’t panic — your anti-lock brake system has your back.

Check out all the brake system products available on NAPA Online or trust one of our 17,000 NAPA AutoCare locations for routine maintenance and repairs. For more information on anti-lock brakes, chat with a knowledgeable expert at your local NAPA AUTO PARTS store.