Three types of headlights are common in passenger vehicles today: halogen, light-emitting diode (LED) and high-intensity discharge (HID). Laser light as a source recently hit the larger markets, but isn’t in wide use yet so we wont include it here. Halogen headlights are by far the most popular, but the other two are catching on because of their superior illumination. When it comes to upgrading your vehicle’s bulbs, you’ll typically look at HID vs. LED bulbs. Here are the differences between your three choices.

Halogen bulbs are similar to incandescent lightbulbs, as both use a filament. Where incandescent bulbs feature a tungsten filament housed in glass, halogens are more complex — the halogen filament is surrounded by a quartz capsule and filled with iodine and bromine gases, which causes the lights to burn hotter and brighter. Halogens last two to three times longer than traditional incandescent lights.

Halogen bulbs give off a lot of heat which can sometimes affect the headlight wiring and harness connections. They are also sensitive to contamination during installation. The glass bulb must be kept clean or else risk a chance of rapid failure. Something as small as oil from your finger tips can ruin a halogen bulb, but if the bulb does get dirty it can likely be cleaned. 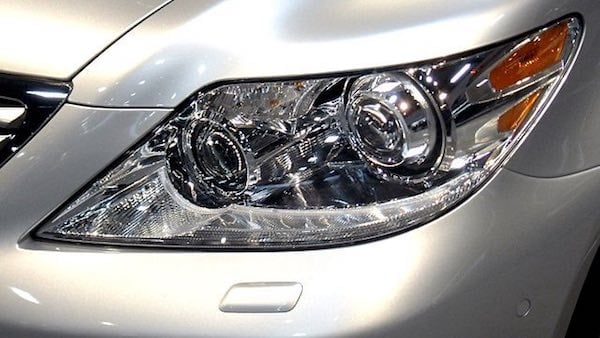 Beginning in the 1990s, car manufacturers began gradually weaving HID headlights into their fleets. HID lamps create artificial light with no filament. Instead, they alight in the same way as a mercury vapor lamp: High-pressure xenon gas is charged amid high-voltage electrodes. This is why HID lights are often referred to as xenon headlights. To get the lighting arc started a ballast is required (much like a fluorescent bulb) which makes the system slightly more complex than a halogen setup.

HID illumination is three times that of halogen, making it easier for the driver to read signs and see road reflectors. HID headlight bulbs are usually placed behind projector-beam headlight assemblies for better focus and to reduce glare from oncoming traffic. HIDs last longer than halogen bulbs and are more energy efficient. Unfortunately the excellent lighting performance of HID lights for cars typically comes with a higher price for replacement HID bulbs.

The most recent advances in headlight technology involve LED lighting. In the early 2010s, Audi began using LED lights, mostly as accent lighting to create a signature look. LEDs, like HIDs, produce a white light that some drivers prefer to the standard yellow lighting of halogens. In recent years though auto manufacturers have made LED headlights for cars a more common option, usually on high end option packages. As for the way they work, an electric current goes through a diode or semiconductor to produce a bright light while generating far less heat than an incandescent bulb. This makes them very energy efficient. They don’t burn out, but they do dim over time. LED lights for cars are also smaller than other types of lights, which allows for more design freedom — every manufacturer has a unique look. This is how some newer automotive designs can have such thin headlights.

Most types of car LED lights are parts of an entire headlight assembly and not really meant to be serviced. On the plus side most LED car headlights are meant to last a long time so they usually don’t need replacement unless there is physical damage. So while you can’t really change a LED bulb, you don’t really need to either. But if a LED headlight assembly does need replacement, brace yourself as the price tends to be quite steep.

How to Choose Your Headlight Upgrade

So, when you want to replace or upgrade your headlights, which type should you go with? Although HIDs and LEDs are certainly an aftermarket favorite for their appearance, they’re not necessarily always better than halogen headlights. Notably, Consumer Reports found that there are no differences in the forward-seeing capabilities among all three when the low beams are on — the setting used most when driving.

Where HIDs and LEDs do have an edge over halogens is in how they supply superior illumination to the sides of the road, which is an important consideration for drivers looking to expand their field of vision. That said, there is no clear winner between HIDs and LEDs, as they perform similarly, depending on the vehicle.

HID vs. LED: Other Considerations

If you decide to upgrade to HID or LED headlamps, you should know that HIDs take a few seconds to reach full brightness, while LED car lights fully illuminate immediately. As mentioned before HIDs also burn a lot hotter, so you may need to take heat management into consideration for a swap. As previously mentioned HIDs also need a special projector-beam headlight housing to focus the light, which is why cheap HID retrofit kits get a bad reputation. Slapping a HID bulb in a reflector-type headlight housing meant for a halogen bulb makes for a bright but uncontrolled light (and possibly a ticket from the highway patrol).

LED lights last longer and use less power than HIDs, giving them an edge that goes beyond peripheral lighting performance. If you choose to upgrade the simplest route is to find out if your particular vehicle was ever available with HID or LED lights from the factory. You can then swap out your current lighting for the upgraded parts which should be plug-and-play. There may also be drop-in LED replacement bulbs for your vehicle. For older vehicles with sealed beam there are even complete LED bulbs that drop right in.

Check out all the headlight products available on NAPAOnline or trust one of our 17,000 NAPA AutoCare locations for routine maintenance and repairs. For more information on the difference between HID vs. LED headlights and picking the best HID headlights or car LED lighting in general , chat with a knowledgeable expert at your local NAPA Auto Parts store.