The car charging system has undergone several key evolutions in the history of the automobile, leading us to the current state of the art that has largely stayed frozen in time for the past several decades. With the advent of electric cars and the increasing demands for efficiency, however, automotive electricals are poised to make another leap forward in the near future.

Before that happens, let’s take a quick look at the history of the charging system.

No Need for Batteries, at First

The first batch of automobiles had no need for any kind of batteries, because they didn’t have electronic starters, radios, electric lights or any of the modern conveniences that we take for granted. In fact, early headlights were often powered by acetylene gas! It wasn’t until the advent of horns in the early 1900s that an engine was required to be able to store electrical voltage for use by an accessory.

Horns opened the gateway to also adding things like electric lights, each of which required a battery to operate. Instead of having to remove the car battery to charge it after use, manufacturers began to install something called a dynamo, or generator, which was a simple but crude way of producing electric current. Generators lasted until the 1960s in most vehicles, but they weren’t very good at regulating voltage and had a reputation for overcharging batteries — and consequently damaging them. Generators were paired with regulators specifically to deal with this issue.

The Arrival of Alternators


By the time the 1960s rolled around, there were so many different electrical systems in automobiles that the car charging system needed a new source of power that could outperform the dynamo. It was also right around this time (beginning in the mid-50s) that companies began to switch from 6-volt electricals to 12-volt electricals in automobiles in a bid to improve start times for higher-compression engines. 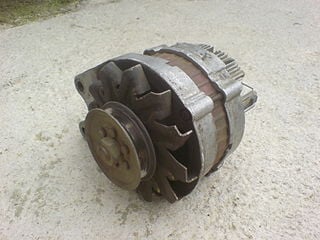 Enter the alternator. What is the difference between an alternator and a generator? Like a generator, an alternator uses a magnetic field to convert mechanical motion into electricity. Unlike a generator, however, it actually spins the magnetic field itself inside a wrapped wire (called a stator). A dynamo, on the other hand, spins the stator inside a magnetic field. Why is this important? Alternators are able to put out more energy and run more efficiently, and they require none of the polarization of a generator. They’ve also worked so well that we still use them as the basis of the modern car charging system.

Due to the fact that EVs require high voltages to function and even gasoline cars are slowly moving to 48-volt charging systems, the future of vehicle electrical systems looks to be as interesting as the past.

NAPA Know How Blog A History of the Car Charging System