The 2020 NHRA Mello Yello Drag Racing Series season got off to a hot start for NAPA AUTO PARTS Funny Car pilot Ron Capps. Literally. One of the NAPA team’s race haulers caught on fire during the trek from Don Schumacher Racing’s headquarters in Brownsburg, Indiana, to Las Vegas Motor Speedway for the annual pre-season NHRA test session. Not only did the fire destroy the truck, trailer, race car, and many of the team’s tools and parts, but it also caused the NAPA team to miss out on the chance to test and knock the rust off.

While other NHRA teams spent the week leading into the 2020 season-opener collecting valuable run data and preparing for the start of the year, Capps’ crew was hard at work salvaging what they could to rebuild the NAPA AUTO PARTS Dodge Charger SRT Hellcat while also setting up a new race rig. It may have been a tall order, but it came as no surprise to anyone familiar with the NAPA team that they were able to show up to the season-opener in Pomona, California, ready to race just one week after the unfortunate incident. Their NAPA Know How earned them the NHRA’s prestigious “Never Rest” award for their ability to endure and overcome adversity.

No Slowdown for Capps During Suspended Season

While the year kicked off in dramatic fashion, the opportunity for the NAPA team to capture their first Wally trophy of 2020 was short-lived, as the NHRA season was suspended after just two races due to the global COVID-19 pandemic.

From mid-March through early July, the on-track drag racing action was suspended but that didn’t stop Capps from keeping his racing prowess sharp, and working hard to keep generating exposure for the NAPA brand. Capps, a self-proclaimed gamer and one of the earliest adopters of the popular iRacing setup quickly signed on for several iRacing events. At times, he was competing in multiple races each week, showcasing his gaming skills behind the virtual wheel of various NAPA-branded race cars across multiple series both digitally and on television broadcasts.
When he wasn’t banking seat time in his iRacing rig, Capps spent much of his downtime making personal Skype and phone calls to NAPA customers, and filming several promotional videos for various NAPA AUTO PARTS stores throughout the country. He stayed connected with his fans and followers through social media via virtual autograph events and Q&A sessions. He also enlisted fan assistance in picking his iRacing liveries.

Capps also joined his DSR teammates by participating in the Athletes for COVID-19 Relief fundraiser. Capps generously donated an autographed NAPA crew shirt, hat, and a parachute from his race car to the cause, and with his teammates, helped to raise nearly $10,000. All of the money raised benefited the Center for Disaster Philanthropy’s COVID-19 Relief fund. 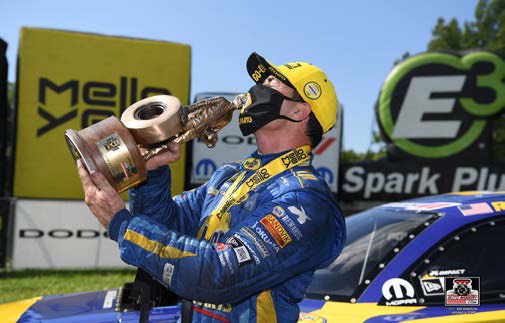 After a more than four-month hiatus, the 2020 NHRA season resumed with a double-header in Indianapolis in mid-July, and it was announced that for the first time since the NHRA Countdown to the Championship playoff format was introduced over a decade ago, there would be no points reset nor a six-race Countdown run to determine this year’s champion. Instead, every race and every point counted equally. Adding to the heightened sense of pressure was the fact that NHRA races are now abbreviated to two rounds of qualifying before the race day fields are set.

Capps, the 2016 Funny Car world champion, and his Rahn Tobler-led team were eager to get going on their campaign for a second world title. Admittedly, the NAPA team hit some bumps as the 2020 restart got underway and they fell to DSR teammates in the first round of eliminations at the first two events. By the third event, also held in Indy, Capps and the NAPA team had found their groove and on race day, they set off the win light four times, earning their first victory of the season.

The triumph was especially significant for Capps, who after 26 years behind the wheel of a nitro-burning machine, was finally able to capture his first Lucas Oil Raceway at Indianapolis victory. With his win at the famed Indy venue, Capps, the second-winningest Funny Car racer of all time, can now say he has been triumphant at every track on the current NHRA tour. The victory was No. 65 for the veteran racer and propelled him to fourth in the Funny Car point standings, and solidly into championship contention. While the rest of the NHRA schedule is unknown, Capps and the NAPA AUTO PARTS team are focused on making every point and every round of racing count as they keep their sights set on capturing the first Funny Car series title of the new decade.