Diesel engines and gasoline engines are similar in many ways. For example, they both use components like fuel injectors, pistons and valves to deliver power to the crankshaft. The way they extract energy from the fuel is a different story because diesel fuel and gasoline are dissimilar, chemically. In colder temperatures, this difference becomes even more apparent, but the diesel glow plug makes starting diesel engines easier.

Diesel fuel, on the other hand, has a much higher flash point, 126 degrees Fahrenheit, and a lower autoignition temperature, 410 degrees Fahrenheit. Once the piston nears top dead center on the compression stroke, diesel fuel is injected directly into the cylinder. Because the temperature of compressed air is higher than diesel fuel’s autoignition temperature, it instantly vaporizes and ignites, forcing the piston down and to the crankshaft. Because diesel fuel ignition is so highly dependent on temperature, diesel engines can be difficult to start in the cold and may emit higher emissions when idling. 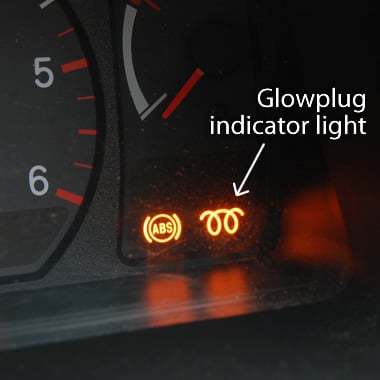 After the diesel engine was developed in the 1890s, cold starting was a problem not easily overcome. Some engines even required a lit fire to warm the intake air enough to start. In cold weather, the cold engine block and cylinder head function as a heat sink, lowering air temperature and idling engines experience reduced efficiency, but glow plugs can make up for the difference. By 1929, development started on the electric glow plug. The hot glow plug warmer further boosts the temperature of the compressed air in the cylinder, pushing it higher than diesel fuel’s autoignition temperature. Warmer block and air temperature improved cold-starting and, later, would be employed to improve idle emissions.

The modern diesel engine glow plug looks similar to a pencil soldering iron and functions on similar principles. The glow plug is threaded into the cylinder close to the fuel injector port and is powered by a dedicated high-current circuit. When commanded on, such as pre-start warming or when emissions control strategies demand, the glow plug’s internal heater coils heat the tip to glowing orange to red-hot. While older designs needed 20 to 30 seconds to heat up, modern designs need as little as six seconds.

While there isn’t usually a glow plug replacement interval, some recommend replacement between 60,000 and 100,000 miles. It’s also generally recommended that, if replacing a single failed glow plug, to replace the set, because others will likely be close behind. You might need to replace a glow plug if a fault is related to a diagnostic error code or if you experience trouble starting your vehicle in cold weather. Fortunately, you can find glow plugs for nearly every application.

Check out all the fuel and emissions products available on NAPA Online or trust one of our 17,000 NAPA AutoCare locations for routine maintenance and repairs. For more information on car engine maintenance, chat with a knowledgeable expert at your local NAPA AUTO PARTS store.