Engine gaskets perform one of the most vital roles in your engine: They keep dirt and debris out and keep oil and other fluids in. When it comes to moving parts, there’s nowhere you’ll find more than under the valve cover. So a bad valve cover gasket is a critical failure. 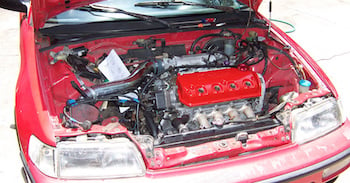 Although it’s covered top and bottom, this gasket is often made of rubber or cork and therefore can be easily damaged from the sides or even become brittle and crack as it gets old, causing a leak. Here’s how to spot a bad valve cover gasket, so you can get to the shop before it takes a toll on your engine.

Shedding Light on the Problem

The most obvious indicators of an engine issue are your dashboard warning lights. If the gasket is leaking enough oil, the oil light will come on, as the engine begins to run low. When you look under the hood, you might be able to spot the leak from a streak of oil running down the outside of the engine from the valve cover.

Looking for an oil leak isn’t always so cut and dry, however. The leak could be small enough that there isn’t a steady flow of leaking oil, or it could be on the back side of the engine out of eyeshot. If this is the case, over time the oil will collect dirt and cake up around the leak. If you don’t see an oil leak, use engine cleaner to scrub the areas around where the valve cover meets the cylinder head and drive for a few days. If there’s any dirt or gunk build up where the cover meets the engine block, you could have a bad valve cover gasket.

If you are losing oil but you can’t visually locate a leak, another one of your senses could alert you to the presence of one. While driving the car, you may smell burning oil. The leak might be happening, but by the time you get out to inspect the engine, it’s burned off on the hot engine block. If you smell burning oil, bring your car in for repair right away.

Dealing with a Three-Alarm Misfire

Depending on how bad the oil leak is, on certain engine designs it could get into the spark plug tubes and cause a misfire. Oil on the plugs where they contact the spark plug wire (or coil pack) will prohibit the spark from igniting the fuel and air mixture, and your engine will run rough. It could even sputter as it struggles to keep running. Again, if your engine is leaking oil this badly, take it in for repair right away, as this could cause a fire under the hood.

A bad valve cover gasket can wreak mayhem on your engine in a number of ways related to oil. Whether your engine oil light has come on or you see an obvious oil leak, smell burning oil or experience a rough-running and misfiring engine, an oil leak from the valve cover gasket is a critical failure that should be repaired immediately.

Check out all the maintenance parts available on NAPA Online or trust one of our 17,000 NAPA AutoCare locations for routine maintenance and repairs. For more information on valve cover gaskets, chat with a knowledgeable expert at your local NAPA AUTO PARTS store.