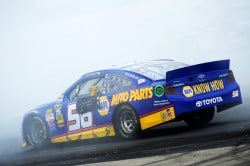 Sunday marked Truex’s first victory with MWR and moved him to 10th place in the standings.

“I can’t even put it into words,” said Truex after pulling into victory lane. “I’ve got so many people to thank that have stuck with me. Everybody at NAPA AUTO PARTS. Everybody at Toyota Racing. Michael (Waltrip, co-owner) and Rob (Kauffman, co-owner). Chad (Johnston, crew chief) — Chad has come so far as a crew chief, I can’t even tell you how proud I am of him. The team — they’re just phenomenal. We’ve had cars really fast all year long. We’ve had some tough luck, but that’s part of racing. I’m just proud of these guys for sticking behind me and working hard and giving me race cars like this. I’ve got to thank everybody that supports our program and stood behind me for 200 and something races without a win. We’ve been close a lot and it feels damn good to get one finally. It’s going to be a wild ass week, I can tell you that much.” 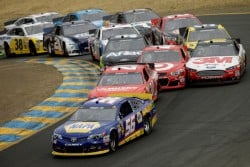 Truex started 14th as a light drizzle threatened to slow the action but it remained business as usual as the NAPA driver patiently worked his way up through the field dodging slick conditions and competitors spinning in the carousel. He broke into the top 10 on lap 32 and entered the top five a circuit later after a strong restart.

Truex took over the lead on lap 41 and was never challenged again. Crew chief Chad Johnston called his driver in for a splash-and-go service on lap 69 to ensure Truex would face no fuel issues.

“We weren’t real sure going into the race where it was going to be,” said Truex. “The tires were falling off so bad in practice. We were really going to play it by ear. We knew our fuel mileage was good. We tried to make sure that we had some options in that department. The NAPA AUTO PARTS Toyota was just awesome, what can I say. It’s a fine line here between running hard enough and too hard and not hard enough — I don’t know. I wanted to run hard enough that I could keep at least matching the guys behind me on lap time or pulling away. I was trying to be smart, trying to be smooth and keep something in case we had a caution. The only thing I could think of for the last 15 laps was please no caution, please no caution and just try to focus on hitting my marks and not screwing up. All the credit goes to my team and Chad (Johnston, crew chief) and my pit crew has been awesome lately. I’m just so proud of Chad for what he’s done. He’s really come along as a crew chief and we’re going to win a bunch of races together.”

Truex went on to lead the final 27 laps before claiming his second career NASCAR Sprint Cup Series victory and seventh for MWR including the last two Sonoma Raceway races. 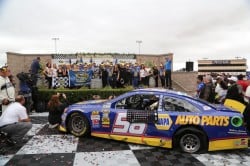 “I don’t think this win has sunk in yet,” smiled Truex. “No, not even close. I just can’t thank all these guys enough. Everybody on my NAPA team, everybody at Michael Waltrip Racing for working so hard and sticking behind me, my teammates — everybody who sponsors this car — everybody at Toyota Racing Development for some awesome engines. We learned a lot from Clint (Bowyer) here last year, obviously with what he did and were able to use some of it. He’s an awesome freakin’ teammate, him and Mark (Martin) and Brian (Vickers) today ran really good. We have such a great race team right now. I’m just so glad this thing is out of the way because we’ve been so close and I feel like now we’ve gotten this one out of the way we can do it a whole bunch more.”