A multifuel engine is a surprisingly common feature on modern cars but you’ve most likely never given it a second thought. That’s because the majority of vehicles built in the United States are designed to function not just on pure gasoline, but also something called E85, a fuel that is created by blending ethanol (a type of alcohol) and traditional gasoline.

The reason E85 is so popular has to do with government regulations concerning the production and marketing of ethanol. In America, ethanol is generated from corn stocks, which are subsidized in order to encourage biofuels as part of U.S. energy policy. Almost all gasoline in the United States contains up to 10 percent ethanol, but E85 is so named because the allowable percentage is between 51–85 percent, while the remainder is made up of traditional gasoline. The mixture can vary at different points during the year to compensate for the difficulties encountered when cold-starting a high-ethanol mix at low temperatures. 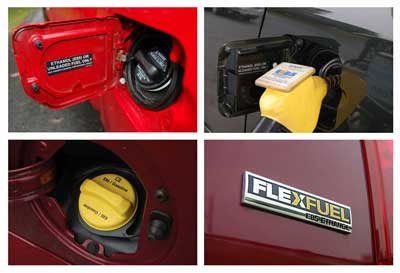 A multifuel engine designed for E85 — also called Flex Fuel — requires special internal engine components, such as fuel pumps, rubber fittings, fuel hoses, seals and gaskets, that are capable of resisting the corrosive nature of ethanol. These engines deliver much more fuel than a traditional gasoline engine in order to combat the major failing of E85 — lower energy density.

In fact, any given volume of Flex Fuel offers roughly 75 percent of the energy available in gasoline, which means injectors and pumps have to work overtime so that the engine can generate the same amount of power it would on gas alone. This makes an E85 multifuel motor considerably less efficient. On the plus side, with a high octane rating — as much as 105, compared to the 93 found in premium pump gas — the potential to tune a multifuel engine for more power at the expense of fuel economy is substantial.

Are There Other Designs?

E85 is not the only multifuel engine design out there. Propane and compressed natural gas (CNG) are the most common alternative fuels that can run alongside gasoline, although the technology and components used to switch back and forth between either of these fuels and gasoline is more complicated than with E85. CNG and propane are most often used by large fleets operating trucks, vans and other heavy equipment, where it’s easier to realize economies of scale on the additional costs associated with these fuels.

For more information on your multifuel engine, chat with a knowledgeable expert at your local NAPA AUTO PARTS store.

One thought on “Do You Have a Multifuel Engine? Benefits and Disadvantages” Leave a comment ›

NAPA Know How Blog Do You Have a Multifuel Engine? Benefits and Disadvantages