Mooresville, N.C. – NAPA AUTO PARTS will join Kasey Kahne Racing (KKR) as a sponsor of Brad Sweet’s No. 49 car in the World of Outlaws Craftsman Sprint Car Series (WoO) in 2017 for 42 races.

Sweet, a native from Grass Valley, Calif., is a 21-time winner in the WoO Series and earned the 2014 Rookie of the Year honors. Sweet has won prestigious races such as the Kings Royal at Eldora (2013), the Short Track Nationals (2010) and Belleville Nationals (2008). He also has six career top-10 finishes in the NASCAR XFinity Series driving for JR Motorsports and Turner Motorsports.

“I’m excited to be part of the NAPA Racing family,” said Sweet. “I can’t thank them enough for coming on board and look forward to working with a company that is so engrained in the motorsports community. Everyone works so hard at KKR and we can’t wait to put the NAPA car in victory lane.”

The World of Outlaws Craftsman Sprint Car Series is the country’s premier dirt track series with 90 races at 50 different racetracks, in 24 states, over a nine month season. KKR has won over 120 WoO feature events, including the series championship with driver Daryn Pittman in 2013. 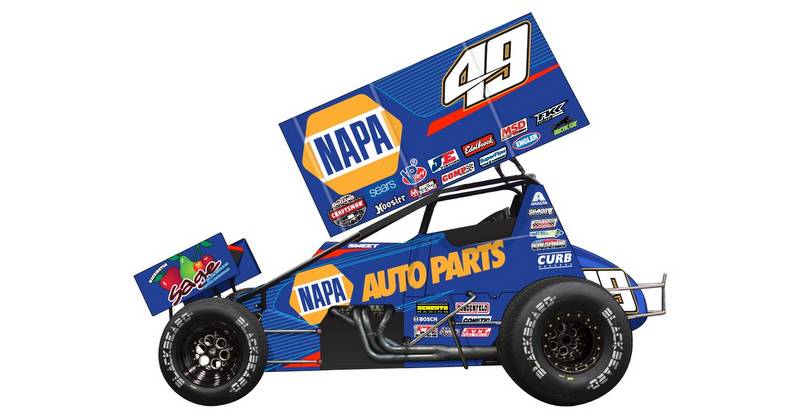 “It’s a great opportunity for KKR and Brad to work with a company that’s been part of auto racing for many years,” said team owner Kahne. “We had a NAPA in Enumclaw, Wash, where I grew up, and we bought a lot of parts there. It’s going to be awesome working together for the 2017 season and we’re really looking forward to winning races with them.”

NAPA AUTO PARTS will kick off the 2017 season with Brad and KKR, beginning Feb. 15-19, 2017 at the Dirt Car Nationals at Volusia County Speedway in Barber, Fla.

“NAPA is proud to partner up with one of the elite team and driver combinations in the sport of Sprint Car racing, Kasey Kahne Racing and Brad Sweet.  We see this as a great opportunity to round out our current NASCAR/NHRA team sponsorships with a team, driver and series that reaches so many passionate race fans across America,” stated Dan Askey, NAPA President.