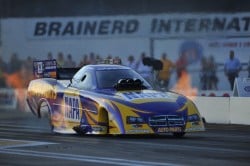 BRAINERD, Minn. (Aug. 18, 2013) – Ron Capps proved Sunday at Brainerd International Raceway that he and his NAPA AUTO PARTS team are not deterred by disappointment or fire.

If anything, Capps along with crew chief Rahn Tobler, assistant John Collins and the rest of the NAPA team, seem to have been ignited by a flaming engine explosion during Saturday’s first qualifying session and the disappointment two weeks before that when the team failed to qualify for a race near Seattle.

The NAPA team showed their fortitude by getting a repaired Dodge Charger R/T back on the track for Saturday’s last qualifying run, and although it smoked the tires on the run, they looked to be in championship form in the Lucas Oil Nationals when they won their third NHRA Mello Yello Series title of the year and moved up to second place in the standings.

The NAPA team had to face current Funny Car points leader and Don Schumacher Racing teammate Matt Hagan in the championship round at Brainerd and a stellar tune-up by Tobler and work by the NAPA team overcame Hagan’s quicker reaction time off the starting line. 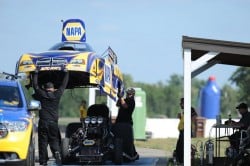 “I wasn’t on my game this weekend, but Tobler made up for it with his tune-up,” Capps said of his reaction times.

“That final round epitomizes how tough our Funny Car category is right now. You have to be on your absolute best on every run, and I wasn’t today. But Tobler made up for it. When we went out there in the final he stepped it up to saved me. Wow. What a weekend.”

Capps, who recorded the 499th round win of his career, was able to qualify for the six-event NHRA Countdown to the Championship playoff that begins two weeks after the Aug. 28- Sept. 2 U.S. Nationals at Lucas Oil Raceway near Indianapolis.

“I got to put my name up there (as a Countdown qualifier) after we won the second round,” he said. “I can’t believe there still are four spots open that won’t be settled until the U.S. Nationals.

“Before this weekend Matt Hagan was the only guy who had clinched a spot. It is so incredibly tight out here. I say it every year, but it just gets tougher and tougher every year.” 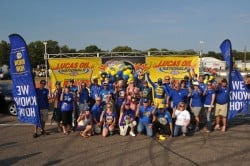 Capps predicted after the team didn’t qualify to race near Seattle two weeks ago, that the mistake Tobler made in setting a clutch timer could end up being one of the best things to happen to the NAPA team.

“I never felt Tobler would be lost coming here off the DNQ. Right after we didn’t qualify he called a meeting and came right out and said he messed up. It takes a special crew chief to step up like that so our guys didn’t think there was something wrong with our NAPA Dodge.”