In recognition of his excellence in leadership, Robert Goldenstein, store manager of NAPA Auto Parts in High Point, NC, received the Patriotic Employer Award from Employer Support of the Guard and Reserve (ESGR), an office of the United States Department of Defense. The Patriotic Employer Award honors citizen supervisors for outstanding support of employees serving to protect our country in the National Guard or Reserve.

Steve Page of ESGR presented Goldenstein with a certificate that now proudly hangs in his High Point, North Carolina store. Goldenstein expressed his delight with the recognition and explained why he likes working with both active reservists and veterans.

“I was very honored to get the Patriotic Employer Award,” Goldenstein said. “It was a good feeling, and I was really happy. It showed me that these guys that I try to help out appreciate it.”

“These reservists bring to the table a great deal of reliability and a real drive to work,” he explained. “They served, so they have a lot of respect for working. They work hard because they’re appreciative of the opportunity.

“I know a lot people that have gone overseas in the military, and I’ve heard stories of the adversity they’ve faced. I have nothing but respect for them.” 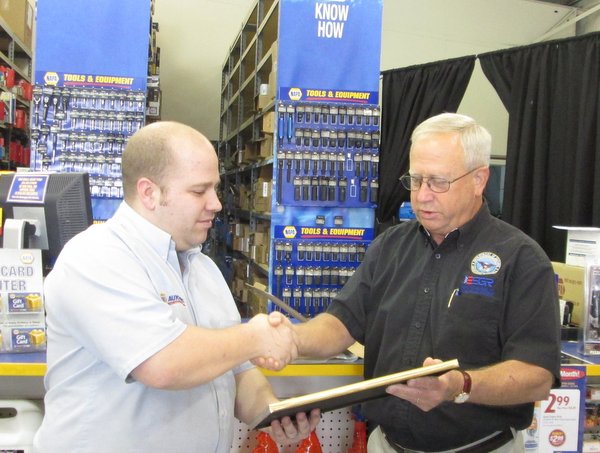 While Goldenstein enjoys working with military veterans and men and women active in the National Guard and Reserves, he said they bring unique challenges for employers.

“Adapting back to civilian life after serving overseas can be tough, just getting back to normal. So I try to help them to do that. I also adjust their work schedules to accommodate a weekend per month or the occasional week away for a special project the military requires of them. I put a few extra hours in myself if I have to.”

Of course, his Patriotic Employer Award shows he does a good job managing these challenges, and for Goldenstein, working hard to make sure those in the National Guard and Reserve can balance their military commitments with their jobs at NAPA Auto Parts is well worth the effort.

NAPA, congratulates Goldenstein for receiving this esteemed award. We depend on our men and women in uniform to defend our country and are pleased to have the opportunity to work alongside them in civilian life, too.

Would you like to offer words of appreciation to Robert Goldenstein and those NAPA employees that serve in the military? Leave them a note in the comments below.