LAS  VEGAS (Nov. 2, 2014) – Ron Capps knew when racing began Sunday that getting in the hunt for the NHRA Funny Car championship would need a monumental effort along with several cars falling flat this weekend at The Strip at Las Vegas Motor Speedway and the season finale in two weeks at Pomona, Calif., near his home in Southern California. 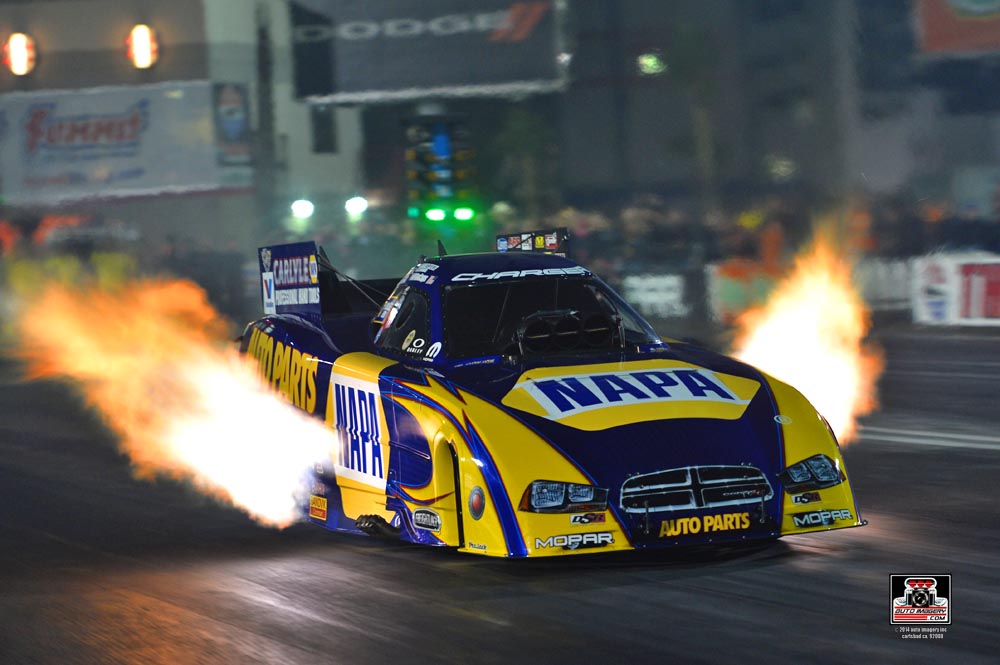 But a close loss in the quarterfinals dropped Ron and the NAPA AUTO PARTS Dodge Charger R/T team from championship contention heading to the NHRA Mello Yello Drag Racing Series’ last event of the year.

Ron is 197 points behind leader and Don Schumacher Racing teammate Matt Hagan, and the most he could earn at Pomona is 150.

After qualifying an impressive fourth for Sunday’s championship eliminations in the NHRA Toyota Nationals, Ron lost by four-thousandths of a second to close friend Del Worsham. Ron’s much quicker reaction time enabled his run of 4.138 seconds at 315.71 mph to narrow the gap by inches to Wortham’s 4.092 (315.19). 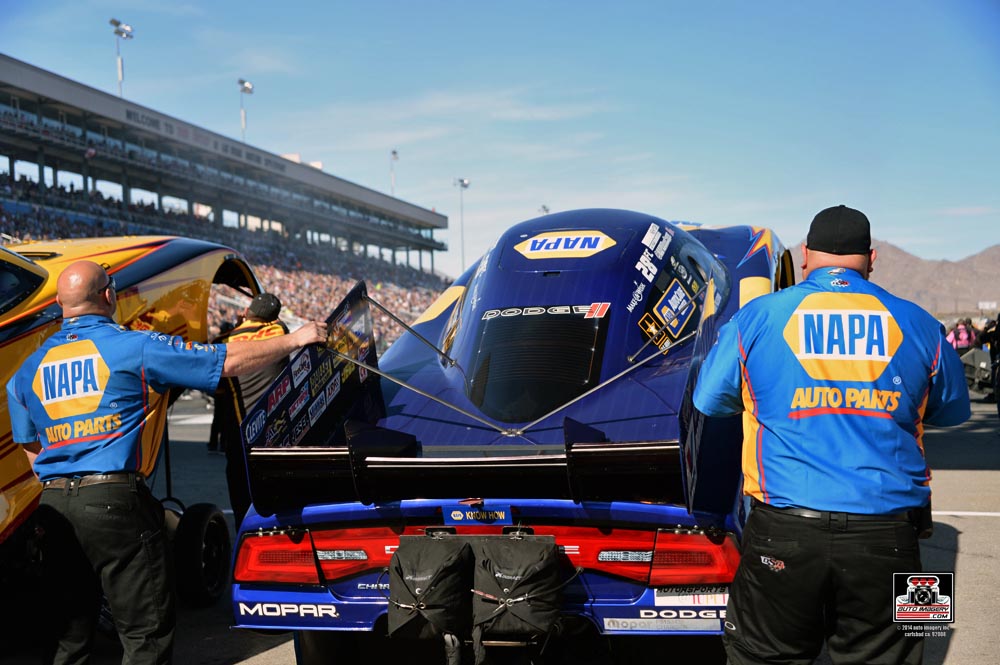 “Oh man. It’s tough,” Ron said. “This time of the year you’re just trying to end it on a good note. We’ve had such a great race car all weekend.

“(Crew chief Rahn) Tobler just wanted to make sure that we went down the track. I didn’t hear Del’s car until the very end. We just kind of ran out of track.”

Ron was trying to extend his track record of four event titles in the Fall at Las Vegas and pad his total of five titles at the track.

While the chapter is closing on the 24-race 2014 season, the NAPA AUTO PARTS team is going all out to win its third title of the year and get a jump on the coming season.

“We could’ve made a lot more ground up, it’s unfortunate,” said Ron, who is seventh in NHRA Funny Car points standings.

“We’re going to stick around and test tomorrow,” Ron said. 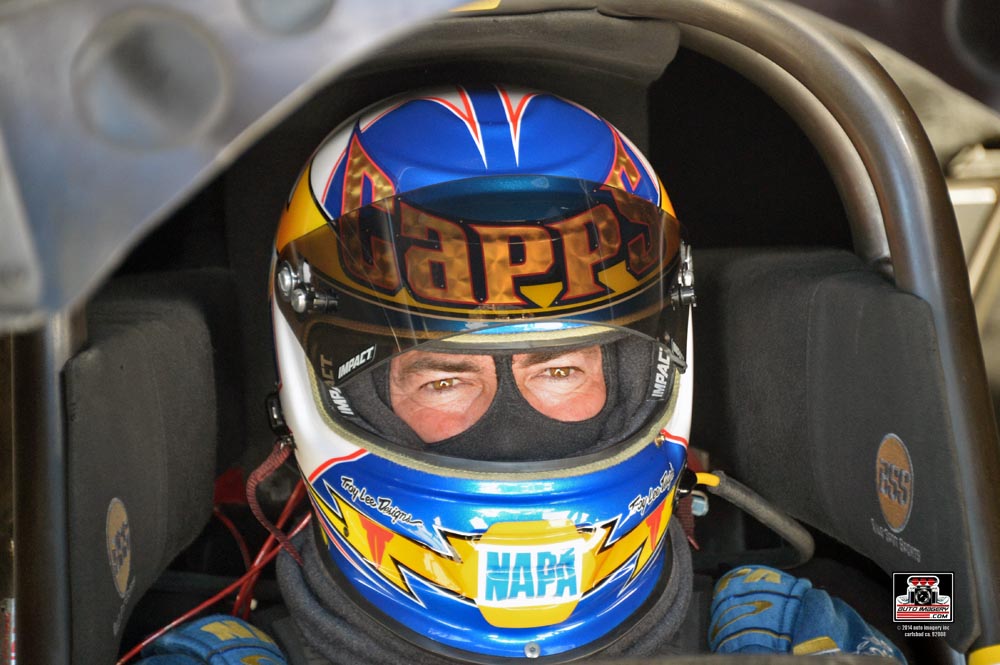 “The test session really is going to help the whole DSR entourage of Funny Cars. You don’t want to start talking about next year already but at this point we just want to make sure that we’re working to stand a little bit further left on the stage at the awards banquet after Pomona and try to finish as strong as we can.” 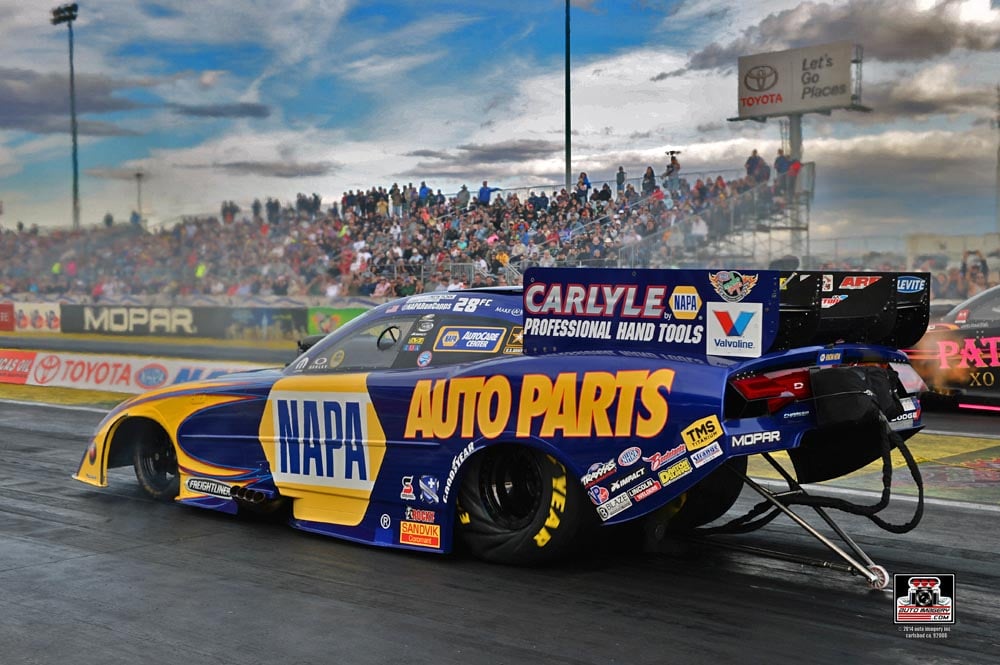