There are a number of sensors that keep your vehicle driving safely and at peak performance, but the oxygen sensor in particular affects not only your car’s drivability but the outside world as well. With its direct impact on emissions, a properly functioning O2 sensor isn’t just good for your engine, it’s good for all of us.

So what to do when you suspect a problem? Take a minute to educate yourself on oxygen sensor repair and avoid paying for it later — in more ways than one.

A common cause of the dreaded check engine light, failed oxygen sensors have a life expectancy of anywhere from 35,000 to 50,000 miles. It’s a unique sensor with impressive technology for something the size of a spark plug — it’s the only sensor that generates its own voltage using a heat-induced chemical reaction.

Some vehicles have more than one O2 sensor, but they are all located somewhere in the exhaust system and operate on the same principle: The sensor measures the difference in oxygen levels between outside air and what is present in the exhaust gas, and sends a variable voltage signal to the engine’s central computer. The computer then uses the information to decide whether the exhaust gasses are rich (too much fuel to air ratio) or lean (too little fuel) and adjusts mixture levels accordingly.

Trouble in the Air 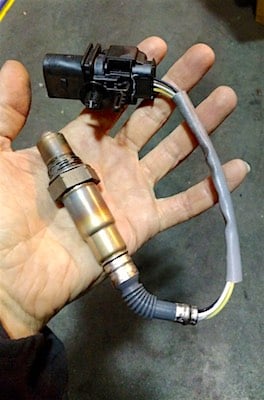 A sluggish or inoperative oxygen sensor can cause a rise in unhealthy emissions and create poor fuel economy. If the engine doesn’t have the proper real-time data from the sensor, it might default to a predetermined air-fuel mixture with no regard for how the vehicle is actually being driven. This means you might get an overly rich mixture and run through a tank of gas faster than usual, or you’ll end up with a lean mixture, creating poor engine performance (stuttering on acceleration or loss of power).

Engines running unbalanced for too long on either side of mixture specs can create chemical deposits and undue stress or premature failure of other components such as the catalytic converter, capable of causing bigger engine damage down the road — so, it’s not something to be overlooked.

The good news is that oxygen sensors are relatively easy to diagnose and repair, though repair may be too strong a word. Due to the technology and materials contained in the sensor itself, your best bet is to replace a faulty sensor. You may have noticed some signs of failure listed above, or you might have a sudden check engine light to contend with. Running a quick scan through the OBD II port will reveal whether you have a faulty sensor. Don’t have a scanner? Most shops and auto parts stores will run a diagnostic scan for free.

Once you’ve narrowed it down to a bad sensor, it’s as simple as changing a spark plug — just unscrew, unplug and replace, taking care not to put any grease on the new sensor, as it will affect a proper reading.

An easy fix that saves fuel. There’s really no excuse for putting this one off.

Check out all the relays, sensors and switches available on NAPA Online or trust one of our 17,000 NAPA AutoCare locations for routine maintenance and repairs. For more information on oxygen sensor repair, chat with a knowledgeable expert at your local NAPA AUTO PARTS store.

NAPA Know How Blog Oxygen Sensor Repair: What All Drivers Should Know