Radiator hoses are a vital part of the cooling system that carry hot coolant from the engine through the radiator and circulate it back — cooler — to the engine again. There are two radiator hoses, the upper and lower, and they’re thick and sturdy enough to handle both high pressures and immense heat. They are usually made of rubber, but silicone is sometimes used in performance applications. It should therefore strike you as odd if you notice one or both have collapsed. Don’t panic, however, as radiator hose collapse is usually a straightforward fix.

Nothing Happens in a Vacuum…Except When it Does

First of all, it’s important to note that some engines are designed to push coolant through the top hose, the radiator and then out the bottom hose. In others, however, the pump is placed to circulate coolant in the opposite direction, through the bottom of the radiator. Neither method is better than the other, it just depends on which way the automotive engineers decided worked best for the vehicle. But this means one side (where the pump is) is the higher pressure side of the system. Knowing how your cooling system is laid out will help you diagnose issues later on. Depending on the problem, one or both hoses can become flattened, and there can be different contributing factors. First and foremost, though, a collapsed radiator hose is the result of a vacuum condition. Usually, this is caused by a clog or constriction somewhere in the system. 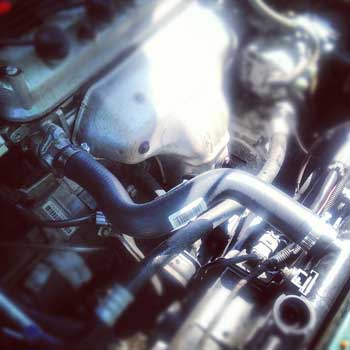 Maybe it only happens at high speeds or during engine revving, or maybe you notice it under the hood when the engine is cool. Perhaps an overheating engine prompted you to root around in the first place. A collapsed radiator hose doesn’t always make itself known, so it’s best to be vigilant and look under the hood every now and then. Engine overheating is not necessarily a cause or effect of a collapsed hose. If you do come across a collapsed radiator hose,  leave the cooling system alone until it cools down completely. Do not attempt to remove the radiator cap, as the coolant can still cause burns or even be under pressure if there is a physical blockage somewhere.

The most common cause for radiator hose collapse is a vacuum issue caused by a faulty radiator cap. Caps are rated around 14–16 psi. Under normal circumstances, caps should release the negative pressure caused when an engine cools down and the liquid coolant contracts. They do lose their rating after years of use or sometimes they simply become too dirty to work. In these cases, all it takes to fix the issue is a new cap. Just make sure you replace the old one with new cap of the same pressure rating. The radiator cap may be located directly on the radiator itself, or it may be located along the cooling system hose path. When in doubt refer to your owner’s manual.

Another common problem is clogging of the smaller radiator runoff hose, which leads to the coolant tank. Decades ago radiator runoff was simply directed down onto the road, but capturing it in a tank is not only environmentally friendly it also reduces the amount of coolant an engine loses. As the engine cools, if fluid cannot return to the tank, this will also cause a vacuum. Simply remove the small hose and check it for blockage, or just replace as it is usually a low cost part. Additionally, it is possible that your radiator is clogged or dirty, but if that’s the case, you’re likely to have some overheating. Sometimes a radiator can be flushed out or even disassembled and cleaned, but it is more common to simply replace the entire radiator assembly. If the radiator is clogged, make sure to flush the entire cooling system to remove any crud that may have circulated. Remember: Never open or remove a radiator cap from a hot engine.

Just because the hose is collapsed doesn’t mean it’s bad, but you should always double check once the engine has cooled down. If the radiator hose is easy to pinch together, spongy, feels loose or sticky or looks cracked, it’s time for a replacement. Many times hoses come with an internal coil spring that maintains their shape, even in a vacuum situation, so don’t be surprised if a broken, corroded or missing spring allowed the collapse in the first place. Changing a hose isn’t too hard, but it can be messy. Be prepared to drain all your coolant in the process so have a large catch basin handy. Refer to your owner’s manual for the correct type of coolant your cooling system uses as well as what quantity to buy.

Always keep safety in mind when dealing with the cooling system. Beware the dangers of hot coolant under pressure and take-no-prisoners cooling fans. An electric radiator cooling fan can switch on even if the vehicle is not running, so keep hands and fingers far away. It is always best to let an engine cool before attempting any cooling system repairs. If you’re unfamiliar with working on cooling systems, it’s best to consult your local NAPA AutoCare before moving forward.

Check out all the belts and hoses available on NAPAOnline or trust one of our 17,000 NAPA AutoCare locations for routine maintenance and repairs. For more information on radiator hose collapse, chat with a knowledgeable expert at your local NAPA Auto Parts store.

2 thoughts on “Radiator Hose Collapse: How to Diagnose It” Leave a comment ›

NAPA Know How Blog Radiator Hose Collapse: How to Diagnose It