In January, Rick Hendrick joined the exclusive club of the NASCAR Hall of Fame. He said he was humbled by the honor and gave credit to his family and everyone who helped him along the way.

“When I think about accepting this award tonight, I think about all the people that have been involved in motorsports,” Hendrick said. “Every person from the very beginning to today. Everyone that laid a brick is part of this.” 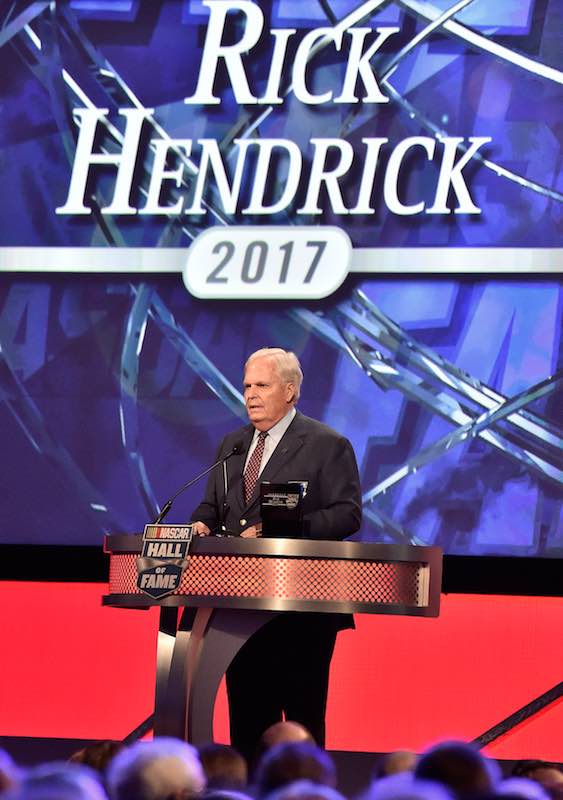 Hendrick always dreamed about racing, even as he was growing up on a tobacco farm in rural Virginia. At a young age he was good at working on engines. He collected car parts, built his own cars, and started drag racing when he was 14.

Hendricks’ wife Linda presented the Hall of Fame ring officially inducting her “best friend and sweet husband” into the NASCAR Hall of Fame. Hendrick’s family, members of his racing organization, drivers, crew chiefs, sponsors, and others, were all on hand to honor the man who has made such an impact in the world of racing.

“Two words quickly come to mind when thinking of Mr. Hendrick – integrity and humility,” said Dan Askey, NAPA AUTO PARTS president. “I recall Mr. Hendrick speaking to a large group of store owners in Las Vegas shortly after we announced our partnership. In his enthusiasm, he extended an offer to help our relationship continue to grow by giving out his cell number. I mean, who does that? Mr. Rick Hendrick does, that’s who.”

Hendrick Motorsports driver Chase Elliott, who pilots the No. 24 NAPA AUTO PARTS Chevrolet SS added, “It’s such an honor to be here. I feel that Rick’s love for racing goes way back, gosh, prior to me even being born or around. And to be able to share a chapter in his racing career is very special to me. His contributions to this sport, his yeas in this sport, I think it’s very fitting that he’s honored tonight and is one of the inductees.”

“On behalf of the entire NAPA family, we congratulate Mr. Hendrick on this well-deserved achievement and honor. Thanks for all you continue to do for NAPA. We are honored to call you a friend and member of the NAPA family,” said Askey.

Hendrick summed up his own feelings about his life, his career and the Hall of Fame honor, “I’m just a lucky, lucky man to be able to live a dream.”