After advancing to the final round for the third consecutive week, Ron Capps earned his 60th Wally trophy during the NHRA Northwest Nationals by defeating points leader Courtney Force. It was a special win for Capps who raced to his career-first victory at the suburban Seattle venue more than 20 years ago.

The milestone win came on the heels of two consecutive final round appearances for the driver of the Pennzoil Synthetics/NAPA AUTO PARTS Dodge Charger R/T Funny Car. Along his way to the winner’s circle, the four-time Pacific Raceways event champion defeated Jonnie Lindberg, teammate Matt Hagan and powered to an impressive pass on a bye run during the semifinals to earn lane choice in the final round. The final, Capps’ 117th, was a battle of the NHRA Countdown to the Championship points leaders with No. 2-ranked Capps facing No. 1-ranked Force. 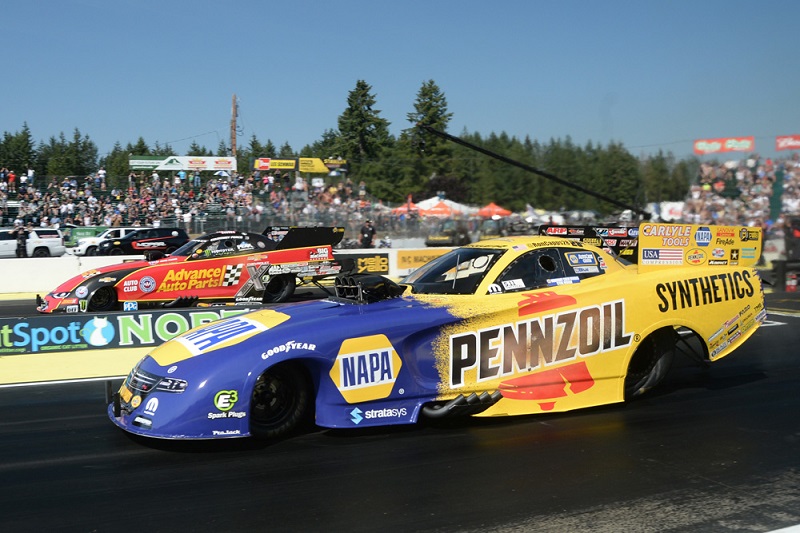 It was a nail-biter of a race against Force with both drivers nearly even leaving the starting line. Capps and Force kept pace with each other until just before the finish line when the Pennzoil Synthetics/NAPA AUTO PARTS Dodge surged ahead for the win. Although Capps wasn’t able to close in on Force’s point lead by much, he was able to prevent her from widening the gap.

“They’ve got a target on their back,” said Capps of Force and her team. “They are the points leaders, obviously. We’re trying to make ground up on them, and you can’t do that when she’s next to me in the final round, you just get 20 points. But, it’s going to be fun. We’re just shooting to be as high as we can in points during the regular season, and they’re going to be tough.” 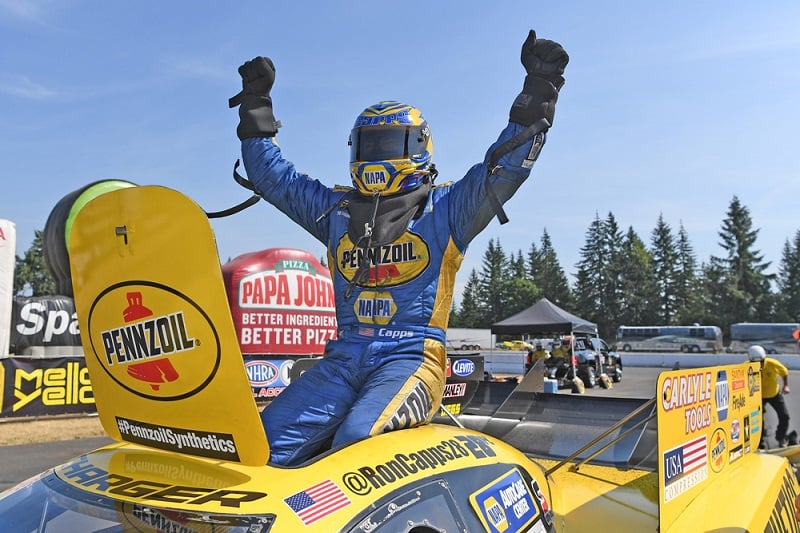 In defeating Force, Capps and the Pennzoil Synthetics/NAPA AUTO PARTS team was able to prevent John Force Racing from ‘sweeping’ the Western Swing by earning all three of the swing’s Funny Car Wally trophies. 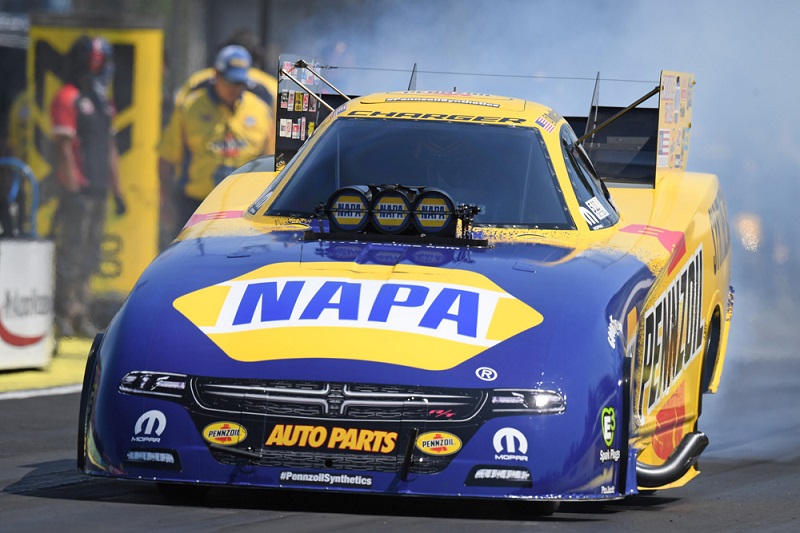 “I’m in the waterbox, and there’s Don Schumacher, and all I’m thinking is they’re going to try and ‘sweep the swing.’ I was on the bad end of those (two final rounds) in Denver and Sonoma, so more than anything, I wanted to end that for Don. That was in my head, ‘don’t let John Force sweep the swing in Funny Car,’ so I’m glad we could put a stop to that.” 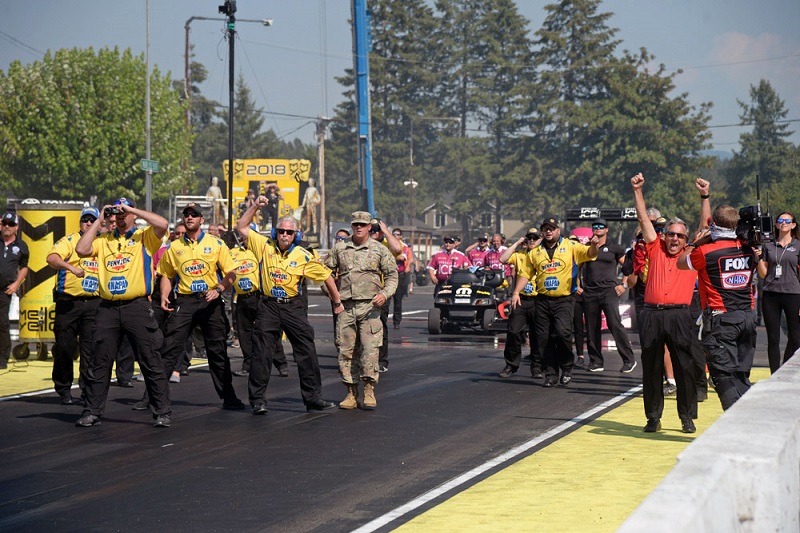 It was a quintessential Rahn Tobler/Ron Capps performance that allowed the duo to pick up their 24th win together on Sunday afternoon. It was at Pacific Raceways in 1995 where Capps claimed his first professional win, his only Top Fuel victory. Capps was nostalgic as he recalled a day he considers a crucial turning point in his career. 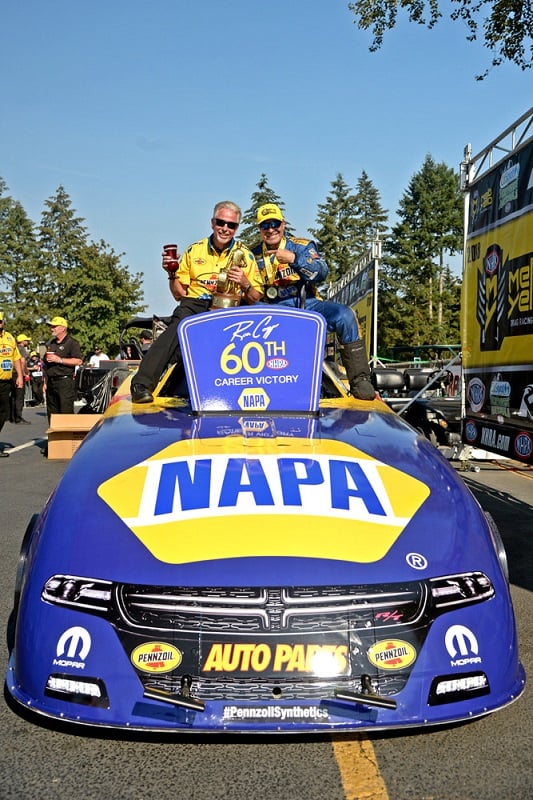 “I won here in 1995. It was on a Tuesday. I was in an unsponsored car, I borrowed money for a firesuit, and Pennzoil was on my suit, my mom sewed it on. That was a big moment. I’ve been here many times and have been able to win in Funny Car, but that was a fateful day. From what (former team owner) Don Prudhomme told me, that was the day he started watching me on the track, how I drove, the way I carried myself. That day probably propelled me to the next step of getting a phone call from Don ‘The Snake’ Prudhomme, and from there led me to be able to drive for Don Schumacher. I’ve driven for two of the biggest names in the sport, represented three Fortune 500 companies in my 20+-year career. I love racing cars, I live for it, so it’s neat to come full circle and stage the car in that same lane where I won on that Tuesday.”

Next Race: August 17-19, Brainerd, Minnesota, NHRA Nationals at Brainerd
How to Watch or Listen: FS1; NHRA All Access