Starting from the unfavorable and unfamiliar No. 16 qualifying position, Ron Capps battled through a stacked Funny Car field to advance to the final round on Sunday at the Mopar Express Lane NHRA SpringNationals Presented by Pennzoil. 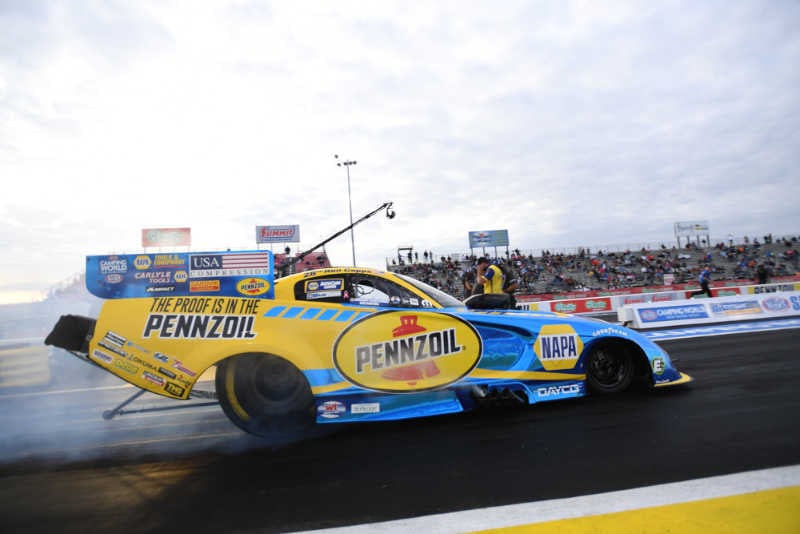 Capps’ march to the final, his third appearance in the first ten races of 2020, began with a monster first-round match-up against championship frontrunner Jack Beckman. Versus his No. 1 qualified teammate, Capps found himself engaged in a classic pedalfest as both drivers lost traction in the tricky, Sunday morning track conditions. Capps successfully got his Pennzoil/NAPA AUTO PARTS Dodge Charger SRT Hellcat to recover first, allowing him to take down Beckman and help to keep his own 2020 championship title hopes alive. Capps then used his starting line advantage to earn a holeshot victory over Cruz Pedregon in the quarterfinals, pitting him against Alexis DeJoria in the semis. Capps was on a good run until halftrack when he started dropping cylinders. Lucky for him, DeJoria suffered the same fate. Capps was able to hang on for the win, but not before his engine backfired, resulting in a cracked Funny Car body. 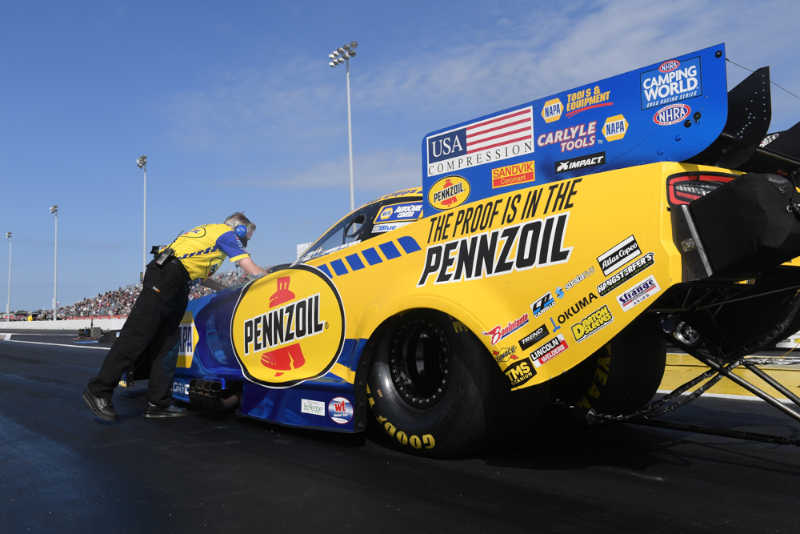 With the clock ticking, Capps and the Rahn Tobler-led NAPA team worked feverishly to prepare their backup car in time for the Funny Car finals, where they were set to square off with another DSR Dodge teammate, Tommy Johnson Jr. Against Johnson, Capps stole the starting line advantage, but by the 330-marker, Johnson had pulled into the lead and was able to cross the stripe first in a race so close, it was won by less than three-thousandths-of-a-second. 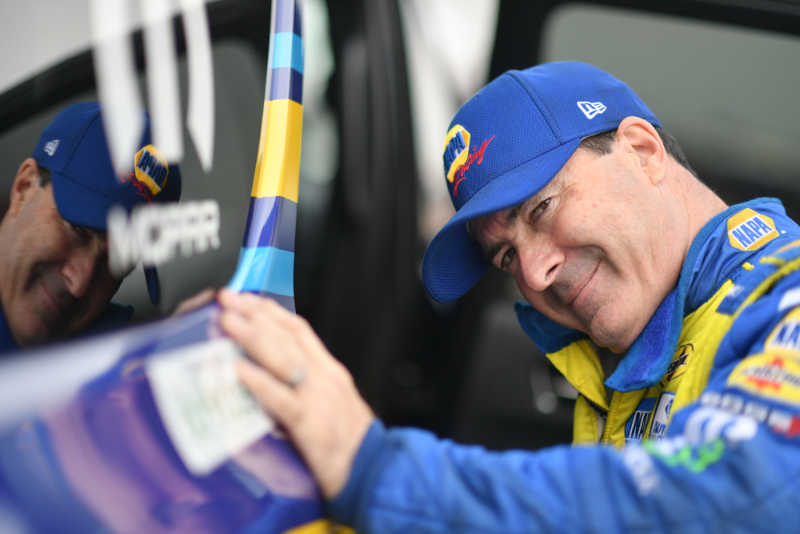 “We were trying to implement some new parts and do some testing, and that’s hard to do with only two qualifying runs and you definitely don’t want to do that on Sunday,” said Capps, a four-time Houston event winner. “That put us behind. But I say it time and time again, coming in Sunday morning, I’ve never thought we didn’t have a chance at winning the race no matter what position we start from. We sure had the FOX TV people scrambling to see when the last time someone won from the 16th spot. You hate to knock out a teammate in the championship, but it’s mano-y-mano up there, and Sunday morning you have one of the leading cars in the points race, and we knew we were capable. It was just one of those ‘grind ‘em out’ days. 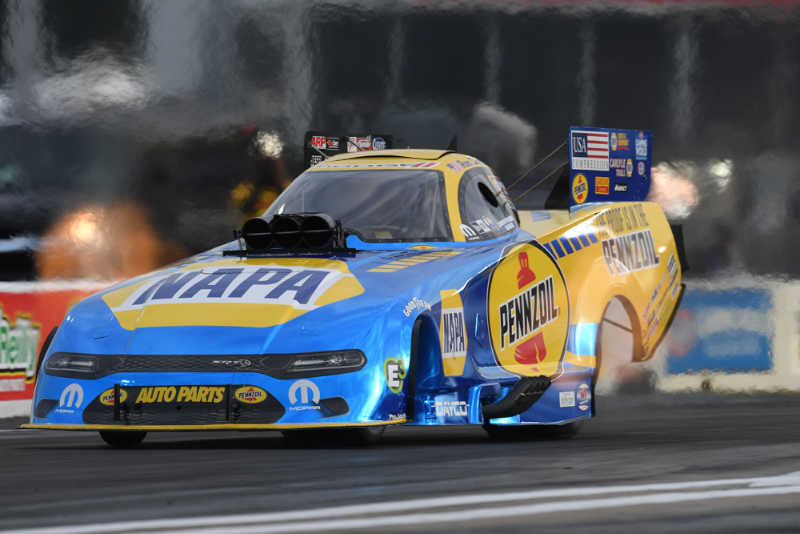 “These are the weekends where you look back at the end of the season and you sort of circle them and you remember that this is where most teams would have gone out early and we gutted out a lot of big round wins and 20 points here and there. When you’re running great and things don’t go wrong, it seems a little easier. Today was one of those knock-down, drag-out fights. In the semifinals, I stayed in the throttle and I didn’t see Alexis (DeJoria). In a nitro Funny Car, when you stay in the throttle bad things can happen and unfortunately, we hurt the beautiful Pennzoil body. But fortunately, we have great sponsors with Pennzoil and NAPA AUTO PARTS and we have plenty of parts at DSR and we have four days to get to (Las) Vegas and do it again.” 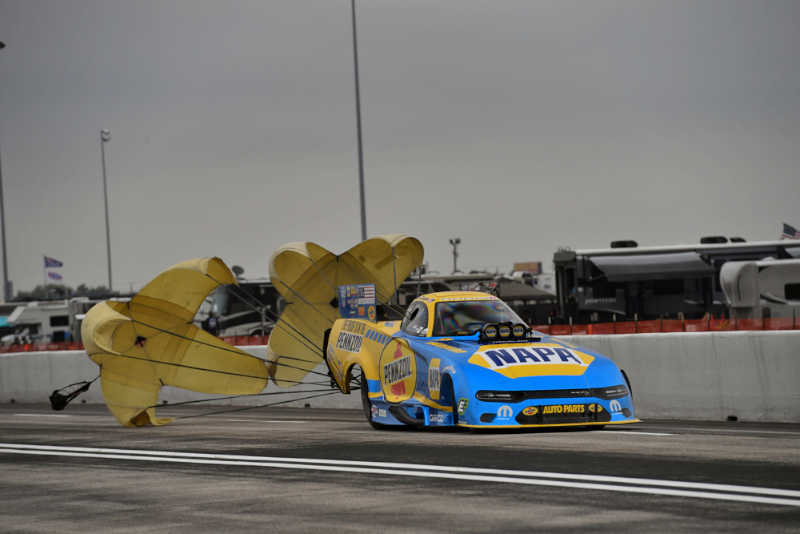 By advancing to the final round, Capps maintained his No. 4 ranking in the heated Funny Car championship chase, and although a margin of 163 points separates him from point leader Matt Hagan, Capps is technically still in championship contention heading into the season finale in Las Vegas next weekend.