EPPING, N.H. (June 22, 2014) – A day after summer officially began, Ron Capps and his NAPA AUTO PARTS team picked the right time of year to officially begin a hot streak. The popular face of the NAPA Know How commercials raced to his first win of 2014 Sunday afternoon at New England Dragway.

“To get a win, it feels so good for this entire NAPA team,” Capps said of his first triumph in 19 races. “Chase Elliott has been racking it up on the NASCAR side and we really needed to get a win for NAPA and what a better place to do it with all the NAPA folks from Boston and Maine and the entire northeast here this weekend. This has just been a great weekend.” 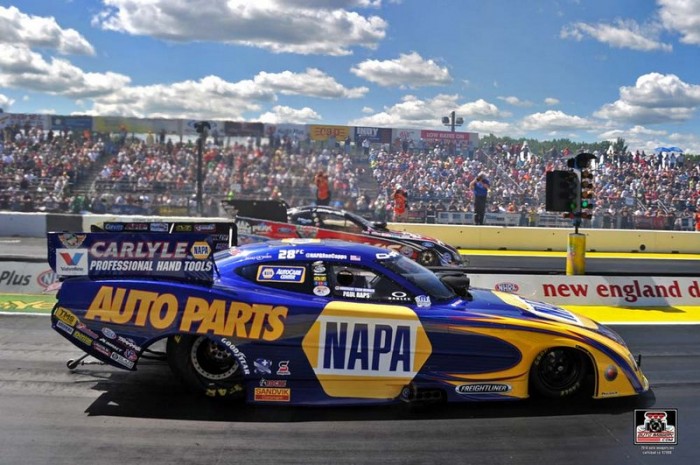 Capps qualified in the No. 10 position, but an experienced racer that’s been through the NHRA battles like Capps knows that a team can win from any of the 16 starting positions.

“We knew there was only one spot left in the Traxxas Shootout and it didn’t want it to come down to a fan vote,” Capps said of the race within a race bonus event during the U.S. Nationals. “That was important to us.”

The last time two DSR teams doubled-up for the win was at Brainerd, Minn. last August when Capps and Spencer Massey collected the Wally trophies. Capps and Schumacher doubled-up at the Phoenix race in February 2013. It was the 39th double-up for DSR nitro teams and DSR now has 228 NHRA wins.

“The guys have been working so hard and we struggled on race day at Bristol and (crew chief) (Rahn) Tobler was real upset with himself after qualifying here yesterday and he stayed here late with Eric (Lane) until they got it sorted out in what they wanted to do today,” Capps, who now ranks fourth in the NHRA Funny Car standings, said. “And to open up with that 4.06 in the first round, I knew our NAPA car was back.”

Capps and the NAPA AUTO PARTS team look to keep their momentum going strong next weekend when the NHRA Mello Yello Series visit Route 66 Raceway in Joliet, Ill. June 27-29. Capps, who earned the pole at the Joliet race last July, has one win in three final rounds at the Chicagoland track. 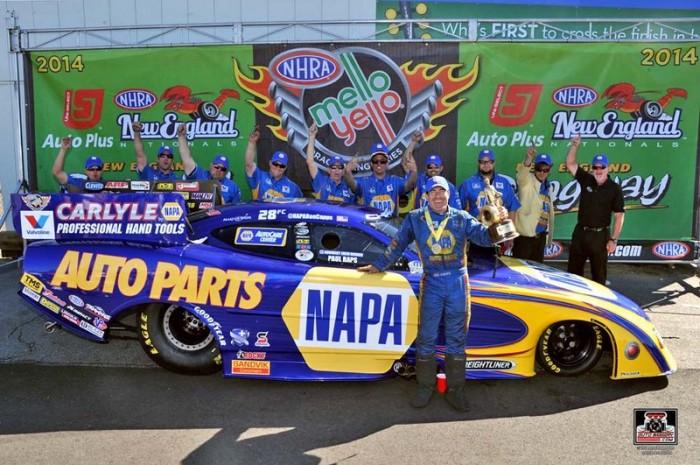 The following are Capps’ eliminations results and other notes from the NHRA New England Nationals: