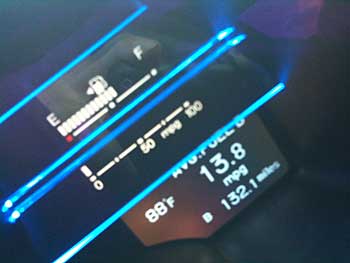 Car nuts come in all shapes and sizes. Whether you’re a power and speed fiend or you just like to enjoy a nice, long drive, one thing holds true: We’re all trying to save gas when we can. Without a doubt, the biggest expense in owning a vehicle is fuel, and, while prices are lower than they’ve been in recent years, getting better mpgs is a universal goal. Here are some tips on how to save fuel:

Miles per gallon is really nothing more than a number; literally, it’s the distance you’ve traveled divided by the amount of fuel you used to do so. Since we’re talking numbers, here a few that affect your fuel economy:

Race fans will love this. Cutting through the air and not wasting energy is the way you make a car go fast on a track, but it’s also a way to save gas on the road. There are myths and tales of secrets to save fuel, but when it comes down to it, you can’t deny physics.

Speaking of physics, let’s consider the kinetic energy of the car while it’s moving. Quickly changing direction requires more energy than traveling in a straight line, which makes the engine work harder. When driving, use smooth movements to conserve momentum. Many people also claim that starting and stopping quickly wastes fuel, but studies have shown that getting up to speed quicker actually uses less fuel. Lower gears in the transmission are not as fuel-efficient, so getting up to cruising gears yields better fuel mileage.

Additionally, some say that using the AC wastes gas. While they’re correct in thinking that the engine works harder turning additional components, they’re not considering the work designers put into aerodynamics. At 55 mph, the drag of having the windows down is nearly the same as rolling them up and running the AC. Going faster improves mileage with them rolled up, but if you’re driving around town at lower speeds, roll them down and nix the AC.

Saving fuel is a matter of math and science. Armed with some simple numbers and concepts of kinetic energy, you can cut your fuel mileage significantly.

Check out all the fuel & emission system parts available on NAPA Online or trust one of our 17,000 NAPA AutoCare locations for routine maintenance and repairs. For more information on how to save fuel, chat with a knowledgeable expert at your local NAPA AUTO PARTS store.

NAPA Know How Blog How to Save Fuel: Hypermile Secrets You’ve Been Missing