More than 30,000 people die in car accidents annually in the United States, according the Insurance Institute for Highway Safety. That figure is staggering, but it’s far below the peak death rate of 54,589 in 1972 when there were far fewer cars were on the road. Today’s cars are built better, and often come equipped with safety features that mitigate injuries and reduce deaths. Beyond air bags, crumple zones and anti-lock braking systems, there are huge advancements in new car technology. 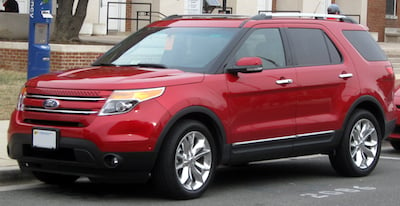 Also known as backup cameras, rearview monitors enable drivers to see behind their vehicles. These types of cameras effectively eliminate blind spots, letting drivers see children, pets and objects that might otherwise be obscured. Every year, thousands of children are injured or killed because a driver, often a parent, backs over them, according to the KidsAndCars.org. Monitors like this are becoming standard equipment in new cars.

Some automakers have taken it to the next level by placing cameras on all four sides giving the driver a top-down view of everything surrounding the car. Special lenses and video processing seam the different camera feeds into one smooth view on the infotainment system.

Another favorite new car technology is voice control systems. They have been in use for several years and are increasingly available with most mainstream models. These systems typically operate in conjunction with your car’s telematics system. Telematics interaction can prove distracting, but those units with included voice control usually allow the driver to make calls, receive messages, search radio stations and map a route without needing to take their hands off the steering wheel. Distracted driving is a big problem, but voice control systems provide drivers with the security they need. Some automakers have gone so far as to integrate voice control systems like Amazon’s Alexa into their vehicles from the factory.

Standard cruise control has only gotten better with the addition of the adaptive version. Also known as radar cruise control, this particular new car advancement ensures that your vehicle maintains its distance between your car and the vehicle in front of you, no matter the speed. That means if you were to set the cruise control to 60 mph, and the car in front of you slows to 55 mph, the system automatically slows your car. It only resumes the higher speed when the slower vehicle picks up speed or moves out-of-the-way.

Another recent innovation is the widespread adoption of blind-spot warning systems. These rely on sensors to determine when a car is approaching your blind spots, by lighting a symbol in the appropriate side mirror. Some manufacturers tie these systems to lane keeping assist (LKA). With LKA, your car cannot switch lanes on the highway if the warning system detects a car in your path, enabling you to avoid a side profile accident.

Backing out of a parking space in a busy parking lot has always been a delicate operation. While it still requires your utmost attention, a rear cross traffic alert system can tell you if a vehicle is approaching from the side as you reverse. Depending on the system it can even apply the brakes if an impending collision is imminent. If you have ever been sandwiched between two large SUVs in a parking lot, then you know the value of an extra set of eyes helping you back out of a parking spot.

Driving may feel like a passive exercise, but in reality your mind and body are on full alert. Over a long haul driver fatigue can set in making it hard to stay focused. Automakers know that driving while tired or drowsy is dangerous so they put technology to work. These systems monitor your driving behavior over the trip and can detect when your movements have drifted out of your previous patterns. If the systems decides that your actions are no longer the same as they were earlier, an alert will sound or a warning light will show up on the dashboard. If your car says it is time for a meal break and a good stretch, it is probably right.

This technology has been one of the most talked about developments in decades. Sensors and forward facing cameras on your vehicle can “see” down the road in front of you and feed that data into a computer. The computer monitors a far wider number of inputs than you can see with your own eyes. Using this data it can calculate if there is something in front of you and if you are going to hit it. Once the systems decides a collision is imminent and the driver has not yet taken action, the car will actually perform an emergency stop by itself. This technology isn’t a license to drive distracted, but it has serious potential to reduce accident rates.

Improvements in headlight technology give drivers the ability to see further and wider than they ever have. Indeed, this new car technology increases the driver’s line of vision, helping them to react faster. For instance, that herd of deer, just out of sight with common halogen headlamps, may come into view faster with your BiXenon headlamps that also move slightly up and down as well as to the left or to the right as you climb hills and take corners. Providing drivers with a few extra moments of reaction time can make all the difference for accident avoidance, per the Insurance Institute for Highway Safety.

No matter what technology is offered in your new car, it can help you drive smarter and safer, ushering in an era of enhanced security not available a mere generation ago. These systems are also becoming standard equipment on more and more vehicles, so the next time you are car shopping you can add them to your “must-have” list.

Check out all the relays, sensors and switches available on NAPA Online or trust one of our 17,000 NAPA AutoCare locations for routine maintenance and repairs. For more information on new car technology, chat with a knowledgeable expert at your local NAPA AUTO PARTS store.