Brad Sweet and the NAPA AUTO PARTS Kasey Kahne Racing (KKR) team picked up two more victories over the weekend as the World of Outlaws Sprint Car Series raced back-to-back nights at Federated Auto Parts Raceway at I-55 in Pevely, Mo. This extends Sweet’s streak to four consecutive wins and brings the season total to five wins in 11 races. 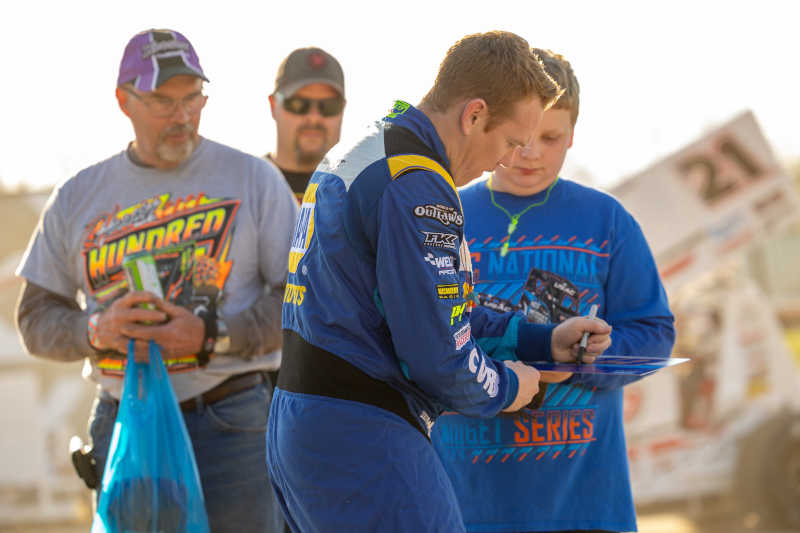 On Friday, Sweet and the No. 49 team unloaded at the 1/3-mile track in Missouri hoping the series would live up to its name, “The Greatest Show on Dirt.” After hot laps, the NAPA AUTO PARTS car qualified ninth quick out of 27 cars. This placed Sweet in the third heat race of the evening with a third-place starting position. The No. 49 team finished third in their heat, missing the Fast Pass Dash by one position. Sweet had his work cut out for him as he was lined up in the ninth position for the 40-lap Feature. 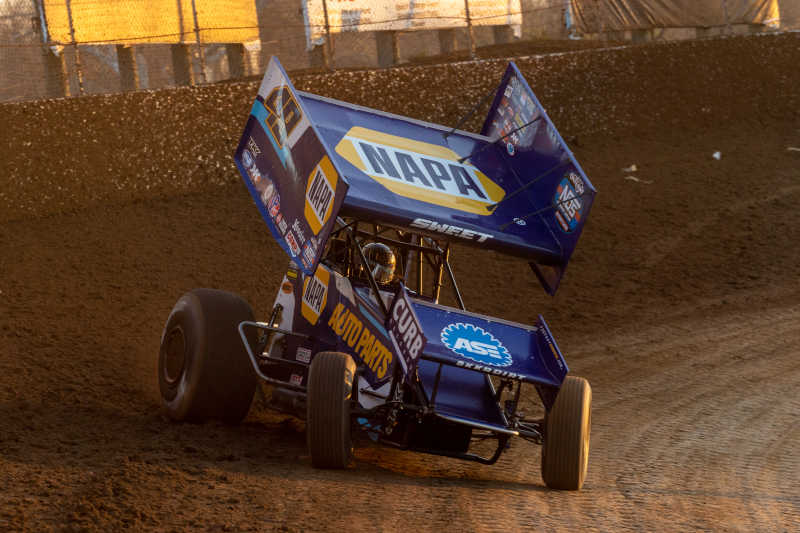 When the race went green, Donny Schatz jumped out to the lead while Sweet began battling for track position. On lap five, he had made his way to sixth just before a caution came out. Sweet made up even more ground on the restart, jumping three spots to challenge Kraig Kinser for the third position. Kinser held on to third, and Sweet settled into fourth place. By lap 15, the No. 49 car was in second-place, challenging Schatz for the lead. Another caution came out on lap 16; Sweet fell back to third on the restart. Shortly after, Schatz fell out of the race with mechanical issues, giving Sweet another shot at the lead. He was finally able to get around Kinser for the top spot on lap 19. Sweet and the NAPA AUTO PARTS car captured the lead at the halfway point and never looked back. He took the checkered flag 1.012-seconds ahead of the field as he collected his fourth win of the season. 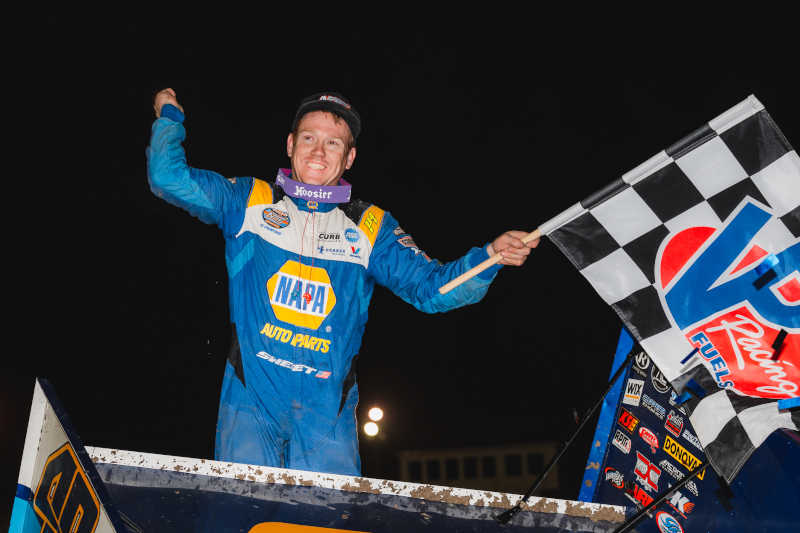 “We don’t want to give away our secrets,” Sweet jokingly said after the race. “We’ve got a lot of experience working together with Eric [Prutzman], Andrew [Bowman], and Joe [Mooney]. There’s a lot to be said about us all sticking together. We’ve got a great car owner in Kasey Kahne and we’re blessed to work with NAPA Auto Parts as our sponsor. We’re working hard to capitalize on the situation we’re in.” 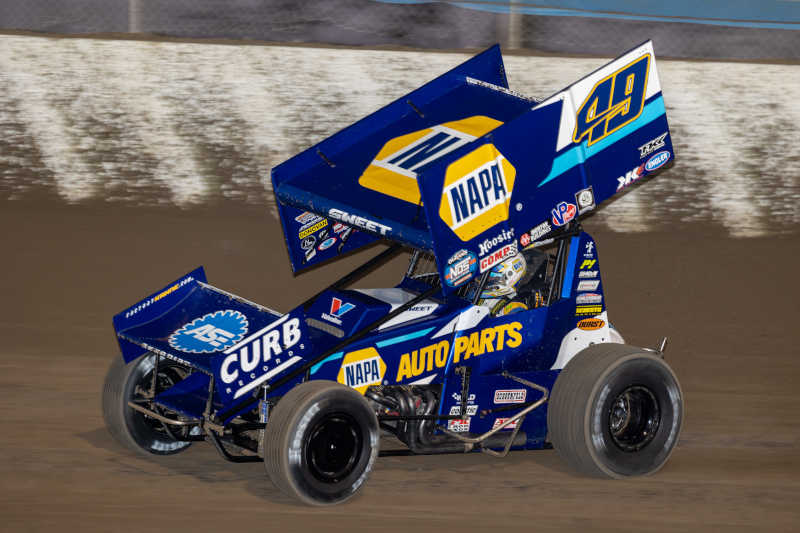 On Saturday, Sweet and the NAPA AUTO PARTS team got off to a better start, qualifying fifth-quick with a lap time of 10.353 seconds. The effort put the No. 49 team in the outside pole position for their heat race, lining them up beside Giovanni Scelzi. Scelzi captured the lead on the initial start as Sweet fell in behind him. They stayed in this position and finished 1-2, both drivers moving on to the Fast Pass Dash. Sweet drew the Pole position during the random draw for the Dash. During the eight-lap Dash, he was able to hold off his competitors to capture the win and start Saturday’s 40-lap feature from the pole.

When the green flag flew, Sweet jumped out to the lead. Scelzi wasn’t far behind and eventually challenged the No. 49 car for the top spot when they hit lapped traffic on lap nine. Sweet skillfully navigated his way around the lapped cars, keeping Scelzi’s charge for the lead at bay. Sweet went on to lead every lap of the race and win by a 1.937-second margin to the second-place car of Sheldon Haudenschild. 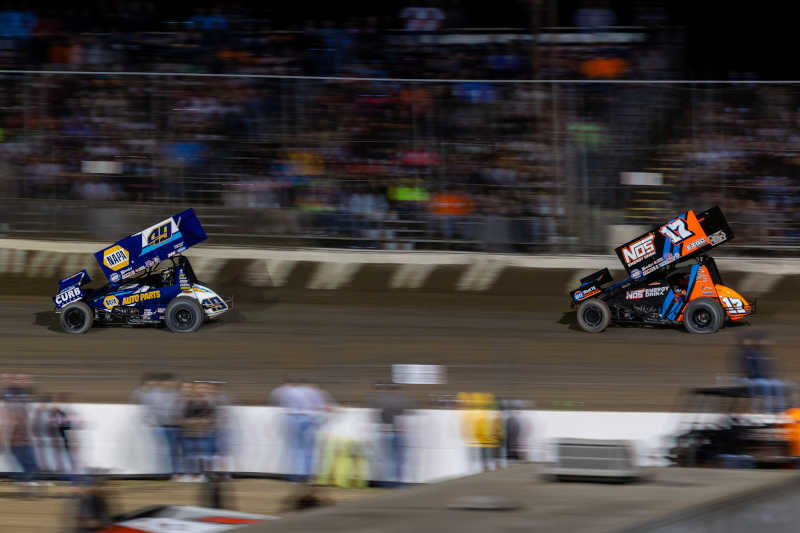 Sweet continues to lead the series in wins as well as driver point standings, with only one finish outside of the top-five.

“We were off at the end of the race last night, but we made a small change and it was much better,” Sweet said. “I felt like I had more grip and could move around in traffic with more ease. That’s the key to winning these; even when you win, you have to come back better the next night. It’s been through 11 races, but it’s an 83-race schedule. We want to enjoy these, but our heads are down and we’re looking to win a lot more of these.” 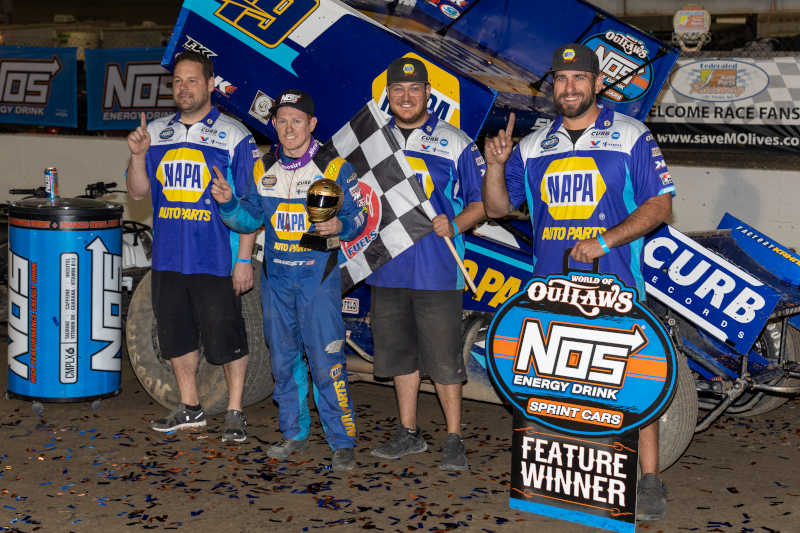 Sweet and the No. 49 team will look to continue their winning streak this weekend as the World of Outlaws Sprint Car Series heads to Indiana. On Friday, April 9, the series will race at Kokomo (Ind.) Speedway before heading to Tri-State Speedway in Haubstadt, Ind., on Saturday, April 10.

NAPA Know How Blog Sweet Sweeps Weekend at I-55 Raceway