On Memorial Day, NAPA AUTO PARTS driver Brad Sweet came from eighth to take the lead in a thriller at Lawrenceburg Speedway and never looked back for his second win of the 2018 World of Outlaws Sprint Car Series season.

Sweet qualified fifth, finished second in his heat and was able to qualify his way into the dash, where he finished eighth. Lining up for the main event in eighth, Sweet and the No. 49 NAPA AUTO PARTS team worked their way into fifth on the first lap. Sweet established himself as a threat early, moving by fellow California native Kyle Larson for third on lap five. 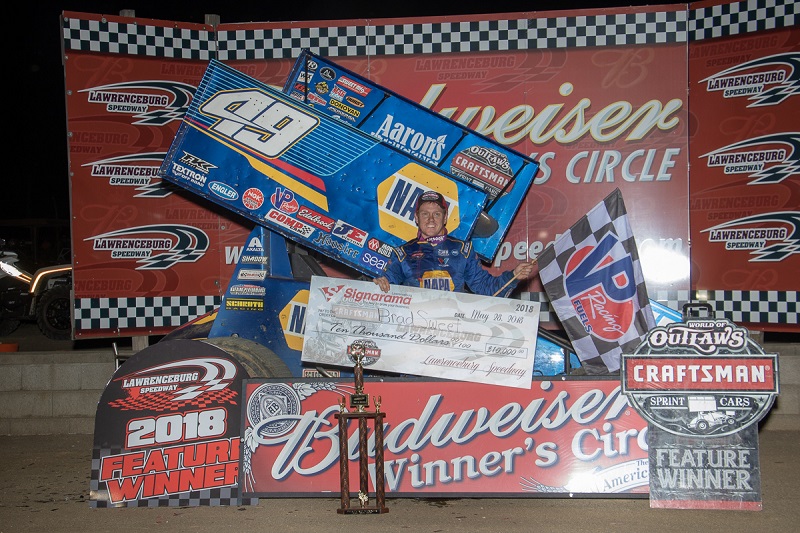 As lapped traffic intensified, leader Paul McMahan bobbled out of turn two on the ninth circuit and Donny Schatz and Sweet both pounced, shuffling McMahan back to third. Larson and McMahan waged war for the third position as Sweet began chasing down Schatz.

As is typical at Lawrenceburg, slide jobs were key Monday night. Schatz was masterful in traffic as always, but Sweet was just as good as the duo sliced and diced their way through slower traffic.

After clearing a handful of lapped cars, the top three were nose-to-tail with 10 laps remaining. Sweet gained on Schatz on an open track and made multiple bids for the lead, before completing the pass in turn two to lead Lap 26. 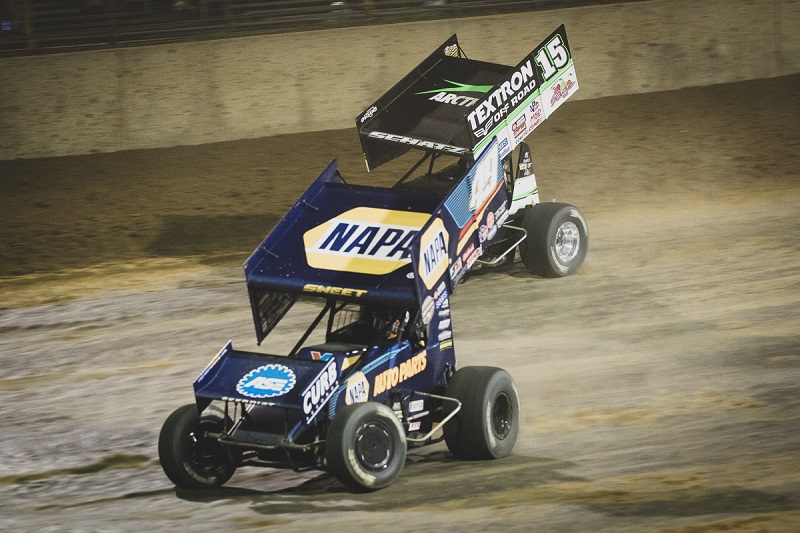 A late race caution brought on a restart with seven laps to go. Sweet showed the speed that got him to the lead from eighth and powered away from the field as David Gravel went side-by-side with Schatz for second and grabbed the position before the final caution flew with three laps remaining for Ian Madsen.

Gravel took a look underneath Sweet on the restart, opening the door for Schatz to steal second back. Schatz had nothing left in the tank to come back after Sweet, as ‘The Big Cat’ crossed the line 1.460 seconds ahead of the Series Points Leader.

The World of Outlaws Sprint Car Series continues its 40th Anniversary Season Wednesday, May 30 with the Series’ inaugural visit to Fairbury American Legion Speedway in Illinois.

Next Race: Wednesday, May 30, Fairbury American Legion Speedway, Fairbury, IL
How to Watch or Listen: www.dirtvision.com