You can produce electric power either with a direct current (DC) generator or an alternator, which uses an alternating current (AC). There was a time when the automotive world used DC generators, but that time has long since passed. The benefits of an alternator make it the preferred choice over the old DC generators.

Despite being replaced by alternators, DC generators or dynamos are the less complicated of the two. They generate power with simple mechanical motion. As long as the shaft keeps turning, then the generator produces electricity. 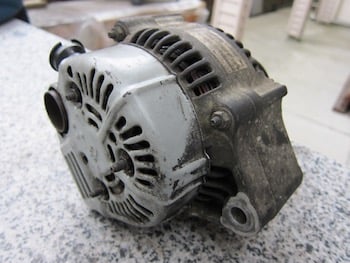 An alternator is more complicated. This is because it needs to convert AC to DC, which adds an extra step to the process. Despite its added complexity, the benefits of an alternator make it the better choice of the two.

An alternator is a more compact way of generating electricity, which has two distinct benefits. First, this yields a noticeable weight-savings over DC generators. A lighter car means better fuel economy, which helps you keep more money in your pocket. Second, it’s smaller, which makes it easier to fit into an already crowded engine compartment and makes the space easier to work in when the time for maintenance and repairs arises.

Both a DC generator and an alternator have a system of rings and brushes to generate electricity, but the designs of these components are different. DC generators use split rings, while alternators use solid rings. The brushes in both rub against these rings.

The brushes in a DC generator wear more quickly as they rub against the splits in the rings. The smooth rings of an alternator don’t cause the same issue, so the alternator requires less overall maintenance.

While both DC generators and alternators can do the job of powering the increasing number of electric components in your car, the benefits of an alternator make it the more efficient and more economical choice.

Check out all the electrical system products available on NAPA Online or trust one of our 17,000 NAPA AutoCare locations for routine maintenance and repairs. For more information on your car’s alternator, chat with a knowledgeable expert at your local NAPA AUTO PARTS store.